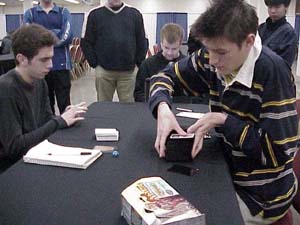 For today's Gateway tournament, Matt Linde and William "Baby Huey" Jensen have decided to run a Battle of Wits deck. The concept of the decktype has received plenty of publicity recently, but most players considered the concept to be unworthy of serious tournament play. The buzz is that these two Pro Tour veterans have been playtesting this deck quite a bit, and it has been doing very well.

Cunningham is running a mono-red Sligh type deck, with plenty of fast creatures and burn. He has no way to handle Battle of Wits if it hits play, so his best strategy is to smash and burn before it happens. Linde will need to use his control spells to stall Cunningham, and survive the first few turns. The longer a game goes, the more it favors Linde.

Linde won the roll, and got to play first. His gigantic deck yielded a fine hand, while Cunningham had to mulligan his. Island was followed by Sleight of Hand, as Linde started to manipulate his deck right out of the gate. Cunningham played a mountain, while Linde accelerated with Charcoal Diamond. Diabolic Tutor followed on turn three, and the inevitable Battle of Wits hit play on turn four. Cunningham had three mountains out, and had not played a spell. The tone of the crowd shifted from quiet, stunned amazement, to disbelief in laughter and snickers. 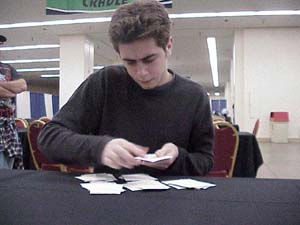 Cunningham kept his draw this time, and Linde looked at his hand, laughed a bit, and went about the task of shuffling his deck yet again to mulligan. Stabilizing his deck after shuffling proved to be difficult, as the sleeves were new, and Linde's mammoth tower of a deck kept coming close to toppling. Spark Mage was summoned on the first turn, and Linde eliminated it with Innocent Blood. Goblin Raider his play, and was joined by Firebrand Ranger, which was Memory Lapsed. It resolved on the following turn, while the Goblin continued to swing. Skizzik without kicker joined the team, bringing Linde down to seven. The following attack brought him to three, and Urza's Rage finished the job.

Another marathon shuffle preceded Game 3, and Cunningham had a bit of difficulty cutting the deck. Cunningham had to mulligan his opening hand, and part of Linde's deck fell over, which got a laugh out of Brian Davis, who was one of many spectators amused by this Feature Match. Coastal Tower came out turn one, while Cunningham dropped Spark Mage. Linde used Sleight of Hand turn two, and had to decide between Void and Recoil. He thought for a bit, and took Recoil. The Mage headed in for the first point of damage, and Cunningham's curve continued with Firebrand Ranger. Linde then used Opt to find Shadowblood Ridge, which allowed him to play Fire and wipe out Cunningham's army. This left Linde unable to use countermagic for a turn, and Cunningham summoned Goblin Raider, but missed his third land drop. 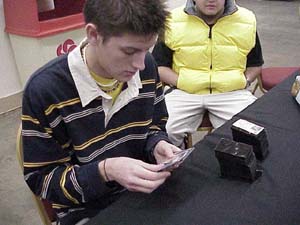 The Raider was soon Repulsed, and Linde was heading into the late game with plenty of life, cards, and resources to work with. Cunningham was still struggling to find a third land. The Raider was killed off with Prophetic Bolt. Linde had a full grip filled with answers, such as Dromar's Charm, Spite/Malice and Recoil, as well as Fact or Fiction. At this point the game was all but over, as Linde had full control. A second Fact or Fiction yielded more card advantage. Lobotomy stripped Cunningham of two Balduvian Barbarians, but Linde decided to keep the others in Cunningham's deck. Probe with kicker let Linde dig deeper, but there was still no sign of Battle of Wits, or a tutor to get it. This made Linde visibly frustrated, as the game was his, but he still had to finish the job.

Still, he was more than capable of winning the game the old fashioned way. He drew Wild Research, and played it with a bit of anger as his body language signaled "Finally!" He went to work searching out Urza's Rage, and had enough mana to kick it. An Agenda followed, and Cunningham scooped.