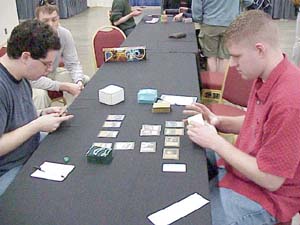 Mike Turian is best known for his prodigious skills at the drafting table. His recent victory at Grand Prix - Montreal put him on the short-list of safe bets to take down San Diego. Today he aims to smash through the Masters Gateway and secure a profitable weekend. In his path is Boston local Andrew Stokinger known mostly for his website. He spent last weekend at Grand Prix - Houston, and got an invite to Pro Tour - Osaka for his thirteenth place finish.

The two are running the same unexpected deck: Balancing Tings. Following in the footsteps of the popular Nether-Haups deck, Tings plays tons of saclands from both Invasion and Odyssey, and uses them to generate tons of mana and then play Balancing Act with no permanents in play. The remaining floating mana usually makes a Terravore, ending the match then and there. It also runs Obliterate, for emergencies.

Stokinger got the ball rolling with an early Nimble Mongoose and a pair of Chromatic Spheres. The minor beats were nothing to Turian, who played four consecutive Invasion saclands and used them to Obliterate.

Stokinger was undeterred, making a super-sized Mongoose two-turns later. Unfortunately for him, Turian's two land plays were Tinder Farms, and let him play Balancing act three turns after Obliterating. The board was reset again.

Two Apocalypses weren't enough. Both players dropped land for the next five turns. The game broke open when Turian played Fact or Fiction, and was offered Syncopate or Mongoose, Fact or Fiction, and two lands. Turian was happy to take the huge pile. He untapped and Obliterated again.

This time, Stokinger had run out of action. Turian played a Mongoose and turned it sideways, saying "Goose you." Stokinger replied with "I feel goosed." "Excellent." said Turian, smiling broadly. 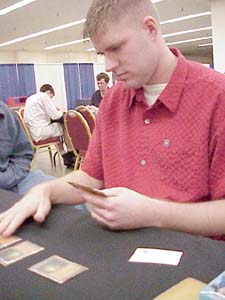 For three attacks, Stokinger was stuck at one land. Turian got a second Mongoose with Fact or Fiction, and played it. Stokinger drew, and scooped.

Both players boarded in Dodecapods and Disenchants. Turian went one better and added Sacred Ground. Stokinger brought in Memory Lapse and a random Bearscape. The Bearscape was literally a last-minute inclusion when he found he only had fourteen cards in his sideboard.

Both players began Game 2 by spilling land onto the table. Stokinger was stuck without blue, and had to blow a Sulfur Vent to stop Turian's Fact or Fiction. They traded Dodecapods, sitting at five land.

Finally, Turian went for it. He sacrificed all his lands and played Balancing act with two green and a black floating. Stokinger came overtop with Memory Lapse. Turian was taken aback. He shrugged and dropped Terravore. Stokinger smiled as he sacrificed his own lands to play two of them. They were all 10/10.

Turian held back. He traded his Terravore for Stokinger's and tried to Balance again. Stokinger showed him Syncopate, and Turian scooped. 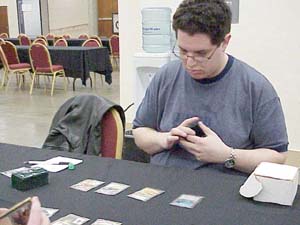 Turian jumped into a strong position in Game 3 when his Sacred Ground went uncontested, negating Stokinger's Balancing Acts and Obliterates. Stokinger had to blow up two of his lands just to get Bearscape onto the table. He didn't even have any green to activate it.

Two turns later he found one, while Turian waited to draw something spectacular. Orim's Chants kept Turian inactive while Stokinger made two bear tokens and a small Mongoose, brawling him to nine.

Backed up against the wall, Turian Chanted with ample lands in play. It resolved, then he blew up his table for twelve mana, eight of which brought out Obliterate. Stokinger floated eight. Turian tried to enter his attack step and clear both pools, but Stokinger made four bears. This let Turian drop Balancing Act.

Stokinger thought hard, then chose to keep a bear. Turian's extra card in hand forced Stokinger to pitch one, and it was Dodecapod. Turian frowned. In two turns, the match was Stokinger's. Afterwards, Turian suggested that Stokinger would have been better off making just two bears, since he could make the rest after Balancing Act resolved. The Dodecapod made it a bit of a moot point.