CCGHouse.com is The Magic Colony's entry into the Masters Gateway. Everyone's favorite colonists Peter 'PTR' Szigeti and Brian Hegstad join forces with former ABU affiliate Phil Freneau in a bid for the big bucks. After relaxing with a first round bye, they beat Singapore's Slaughter House, and now find themselves facing Unlucky's

One of Japan's long-running teams, Unlucky's features Osamu Fujita of Anchans fame, as well as Ayumi Hidaka and Takayuki Nagaoka. Their best performance was Top 4 at Grand Prix - Nagoya, Japan's first team Grand Prix, but their consistency has earned them a high enough rating to compete this weekend. 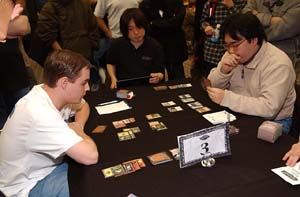 Phil Freneau vs. Takayuki NagaokaThe first match underway was Nagaoka vs. Freneau. While Nagaoka managed only a Cephalid Scout before stalling at two land, Freneau busted out Wild Mongrel, Mad Dog, and Krosan Avenger. Nagaoka found his third land, but was well on the back foot.

Next door, Szigeti was ruling the table against Hidaka. Shambling Swarm and Painbringer meant that Hidaka couldn't keep creatures in the game. Hegstad was also in good shape. His opponent, Fujita, had just a Crypt Creeper and a Mesmeric Fiend, which he held off with a pair of Teroh's Faithful.

Nagaoka finally found a fourth land and dropped a Faithful of his own. Seton's Desire on the Mongrel convinced Nagaoka to chump, but he came back with a Blessed Orator with Strength of Isolation. Freneau had to wait for cards before he could punch through. 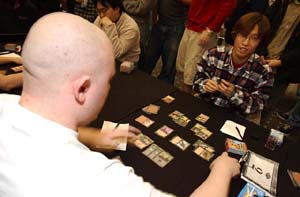 Peter Szigeti vs. Ayumi HidakaGorrila Titan was giving Szigeti problems, but he is a patient man. After spilling creatures onto the board, he made an all out assault, and took down the giant with Afflict and the Painbringer. He was way ahead, but a string of land draws kept Hidaka in the game.

Hegstad soon earned CCGHouse their first win. Balshan Collaborator and Aven Smokeweaver went over the top while Fujita played his tenth consecutive land. And just as he was accepting the handshake, Freneau was attacking for the win. A Crashing Centaur had joined his Desired Mongrel and Krosan Avenger, so he just pitched to threshold and swung through for 8. Eventually Szigeti drew a non-land card and, with the Painbringers help, put CCGHouse up a game in every match.

Freneau's opening hand in his second game was insane, but made a little less so by Nagaoka's Syncopate on his Wild Mongrel. Nevertheless, he had Krosan Avenger and a pair of Muscle Bursts to make Nagaoka regret blocking. 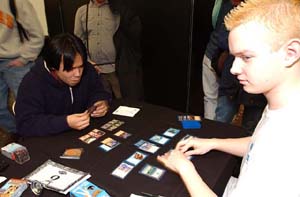 Brian Hegstad vs. Osamu FujitaGame 2 for Hegstad looked exactly like the first, with Fujita playing out a substand army and Hegstad outmatching him on the ground and in the air. In a blink of an eye Freneau was turning to his teammates to report his match win. His Muscle Bursts were backed by Violent Eruption. When Fujita's draws didn't cooperate, he succumbed to Hegstad's Air Force.

The moral victory went to Hidaka, who dropped Gorilla Titan and Arrogant Wurm to even his match with Szigeti just as Fujita's loss eliminated their team.