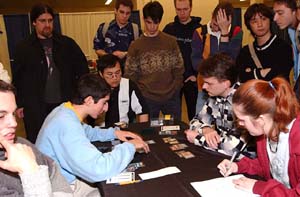 Gabriel Nassif is from France, and was a finalist in both GP London and the most recent PTNY. Oyvind smiled when I asked of his accomplishments and said that he was a Worlds Teams event finalist two years ago with Team Norway. It was clear that Oyvind wasn't daunted by the seeming lack of prestige he had compared to some of the other competitors, he was having a good time, and there was a smile on his face.

As the first game unfolded, which was rather slowly since Gabriel had chosen to play when he won the die roll, I got a feel for what the competitors were playing. Gabriel had a black/blue control deck running Zombie infestation and Upheaval while Oyvind was playing a green/blue deck that splashed a little red, mainly running counter magic, Call of the Herd, Bearscape, and Blurred Mongoose.

For the first five sets of turns, the only action seen was people laying land, but all hell broke loose when Gabriel took the first spell action with Duress. Oyvind's hand revealed two counterspells, fire/ice, fact or fiction, Flame Tongue Kavu, Island, and Mountain Valley. Gabriel chose Fact or Fiction. One turn later there is a counter war over Ice, targeting Cephalid Coliseum, which Oyvind ends up winning, and gaining a chance to cast main phase Fact or Fiction, because Gabriel is now tapped out.

Game 1 gets to a better tempo with Oyvind casting Call of the Herd and generating four bears, and Gabriel drawing four almost-consecutive Ghastly Demises to try and control the flood of creatures. When the four Demises don't prove to be enough, and Oyvind counters a Zombie infestation, Gabriel says its time to go onto game 2, conceding Game 1.

As Gabriel lost Game 1, he chooses again to play first. This game goes as slowly at first as Game 1, but with all the card drawing going on with Fact or Fictions and Ice, its clear that Oyvind has sideboarded out a few Flame Tongue Kavus in favor of Gainsays. However, Gabriel draws into more counter magic than Oyvind, and pulls out a win by casting Upheaval, and then Zombie Infestation, Immediately making three Zombie tokens with the extra cards in his hand. Oyvind takes his next turn, goes to discard, Gabriel makes two more tokens, and then in response Oyvind concedes game 2.

Both players have a chance to cast Fact or Fiction, Oyvind's revealing Syncopate, Gainsay, Yavimaya Coast, Island, Fire/Ice and Gabriel's revealing four land and one Undermine. Things quickly go downhill for Gabriel, as Oyvind Flashes Back his second Call of the Herd, casts his second Blurred Mongoose, and counters Gabriel's Zombie Infestation. Oyvind is able to attack for enough damage to Urza's Rage Gabriel out of the game.

Despite the action-packed games, the match was very quiet. There were more spectators surrounding these two players than the OMS-Davis match, but the whole area was very hushed. These players both don't speak the other's language, so there was only hand signals and card showing going on. You would think that this would cause some problems with misunderstanding timing on the other's part, but both competitors were good natured and were in tune with the other's intentions. The match ended with a disappointed Gabriel, however both players were smiling.