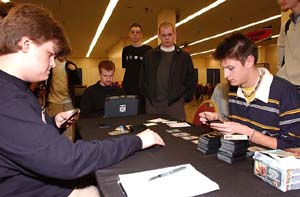 "I just want to make mistakes and lose without anyone else knowing about it."

This was the first thing Brian Davis said when he sat down at the Feature Match table. He is running a Psychatog deck, and Matt Linde is playing Battle of Wits, which has been gathering quite a crowd for his matches. Linde claims that this is a great matchup for him, and one would be hard pressed to argue otherwise. He beat Antonio De Rosa's Psychatog deck last round, and is looking to do the same once again.

Linde played a first turn Duress to strip Davis of a Counterspell. Nightscape Familiar was summoned by Davis on turn two, and Linde Tainted Pacted into Concentrate. The Familiar headed into the Red Zone for a point of damage, and Davis did not have a second island to play. Another Tainted Pact brought Linde into Repulse, which brought back the Familiar. Davis was still short a second blue source and a fourth land, but Linde knew Syncopate was waiting thanks to his earlier Duress. Two Recoils on Linde's land helped Davis slow down Linde's mana development, while he tried to draw into more lands of his own.

Nightscape Familiar came back down, but Linde had Exclude. With Davis unable to play countermagic, Linde saw his opportunity. He untapped his lands with confidence, and played Concentrate, gaining even more card advantage. Duress followed on the next turn, but Davis had Memory Lapse. It was played once again, and Counterspelled. Diabolic Tutor was then cast, and countered with Syncopate. Linde's next turn saw another Duress played and countered, and another Tutor played and Syncopated. One played watching accurately commented "Déjà vu!"

Davis tapped out for Fact or Fiction, which was entirely unimpressive thanks to three Repulses. A Nightscape Familiar was summoned on the following turn, and Linde nullified it with Hobble after a counterwar. This left Linde tapped out, and Davis took full advantage of the situation by playing Upheaval. This was the worst possible situation for Linde, who had the game well under his control up until this point. He was holding countermagic in hand, but had tapped out to fight over Hobble. He hadn't expected Upheaval, but Davis had it, and the game was now back to square one. 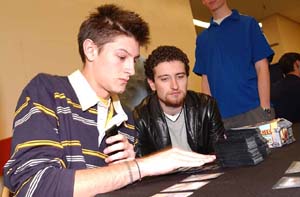 The Familiar came back out on turn two, and would have been joined by Psychatog if not for Counterspell. Hobble was then replayed on the Familiar. This left Linde tapped out, and Davis once again took advantage of the situation by bringing out Shadowmage Infiltrator. Plus, thanks to the Familiar, he had two untapped lands up and ready to defend Johnny Magic.

Linde Repulsed Finkel on main phase, and Davis responded with his own Repulse. Diabolic Tutor was played, but Memory Lapsed. The Shadowmage Infiltrator came in for its first attack of the game, and the clock was now ticking for Linde, who needed to kill it off quickly or win before Davis drew more cards and took control of the game. Diabolic Tutor was played and resolved, and Linde had a very difficult decision to make. He had two mana sources untapped, and could get Battle of Wits and hope for the best, Terminate to kill off the Infiltrator right away, or Urza's Rage to make sure it died off, but not before Davis drew another card. Linde went for the same play and got Rage, but Davis had a second Finkel to make things a lot worse. Linde was already at a very low life total due to taking plenty of damage from his painlands.

Davis played Fact or Fiction on Linde's end step, and Linde responded with his own. Linde's resolved first and revealed four lands and Fire/Ice, which visibly irritated him. He took the Fire/Ice, and sent the four land pile to his graveyard. Davis' Fact or Fiction now resolved, putting him up even more cards. Ice was used on upkeep to tap down Finkel, but losing was inevitable. 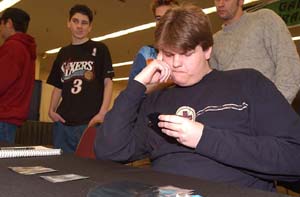 Linde accelerated in this game with a second turn Charcoal Diamond. Davis tapped out for an Infiltrator on turn three, and Linde Repulsed it, and followed that up with a second Diamond. Finkel came back out, and Davis missed his fourth land drop for the second time this match. Linde simply played a third Diamond. Finkel then got to work, drawing Davis into another land. After some thought, Davis tapped out for Lobotomy, which was Absorbed. Linde didn't have many options at this point, and had to play Yawgmoth's Agenda. He had Opt, Repulse and Absorb in hand.

Davis' next attack saw Linde target Finkel with Repulse out of his graveyard, but Davis had Gainsay. Opt was cast on Linde's main phase, and Memory Lapsed. Linde then tapped two mana and played a Diamond, but was reminded that he couldn't due to the Agenda. The Opt was drawn and replayed, and countered. Davis used Fact or Fiction on end step to draw into more cards, and the game was quickly slipping away from Linde, who needed nothing short of Urza's Rage to stop the bleeding. Davis brought out a second Infiltrator, and Linde used the Absorb in his graveyard to counter it. A Psychatog and Familiar later