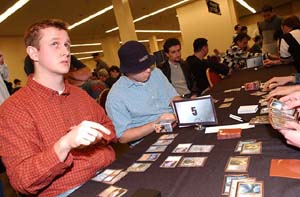 These two highly respected Europeans sat down to play with the potential for a lot of Euro on the line. Alexander Witt, hailing from Holland, sported a pastel blue button down shirt to compliment his pink-sleeved deck. Christoph Lippert wore a black button down shirt, carried a gold-sleeved deck, and dressed in blue jeans (although red jeans might have been more appropriate to give him the full look of the flag from his native Germany). Both brought blue control style decks; Christoph's relied on upheaval and green threshold creatures such as Blurred Mongoose and Krosan Beast to win, while Alexander's heavily metagamed Blue/Black deck (featuring 4 main decked Disrupts combined with 4 main deck Gainsays) had 4 Psychatogs as his only kill mechanism.

Mr. Witt won the die roll, and chose to play first. Both players accepted their initial hands. Alexander led with a Peek on the opening turn, revealing Fact or Fiction, Syncopate, Upheaval, and 4 lands in his opponent's hand. Both players continued to build up lands, with the first permanent of the game being cast on turn 3 (a Nimble Mongoose on Mr. Lippert's board). On the very next turn, Alexander summoned a Psychatog, keeping the smaller Mongoose at bay.

The game went quickly downhill for Christoph who had every one of his spells two-for-oned the rest of the game. An end of turn Fact or Fiction was met with Disrupt. A second FoF caused a loss of three life by way of Undermine. Even though he temporarily removed the Atog with a Repulse, his follow-up of Upheaval was Disrupted as well. To add insult to injury, Alexander cast a Fact or Fiction of his own at the end of the that turn, revealing Cephalid Coliseum, Disrupt, Undermine, Fact or Fiction, and an Island (he ended up with the Undermine and Coliseum after the split). Consecutive turns of Upheavals #'s two and three were matched with an Undermine and a Counterspell, and after a turn of chump blocking, the resummoned Psychatog drew a concession backed by a hand and graveyard full of cards.

Alexander sideboarded 3 Repulse and a Divert in exchange for 4 Ravenous Rats. Christoph sideboarded out Force Spikes for Krosan Beasts.

Christoph began the game with a first turn Nimble Mongoose. In a repeat performance of the previous game, Alexander forced his opponent to lay his hand face up with a first turn Peek; it revealed two Islands, a Fact or Fiction, a Counterspell, and an Upheaval. The creature attacked a couple of turns before a Ravenous Rat (defended by a Disrupt) entered play on the Dutchman's side. This caused the German player to discard a Repulse (which would be potential detrimental to cast upon the black creature). 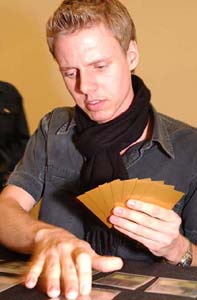 At the end of Christoph's 5th turn, a flurry of spells were exchanged. It began with a Fact or Fiction from Alexander. It was responded to by a Fact or Fiction of Christoph's own. The second spell yielded a Nimble Mongoose, Island, and Opt (sending two unchosen Gainsays to the graveyard), and the immediately cast Opt lead to a Krosan Beast. Next, Alexander's FoF resolved, netting him two Islands and a Gainsay (as opposed to the pile of Island/Fact or Fiction). Seizing the opportunity to cast a spell against his tapped out opponent, Mr. Witt summoned forth a Psychatog. Although he had a Gainsay ready to counter any blue spells, Alexander could not stop Christoph's 8/8 Krosan Beast from hitting play the very next turn. He did, however, remove it temporarily via a Recoil (causing a discard of a Mongoose). The huge squirrel beast was countered through Undermine the next turn, and a Gainsay was met with Gainsay, making sure the creature stayed countered.

Suddenly, the Psychatog became an instant-kill mechanism, between the full hand of cards in Alexander's hand and his immensely populated graveyard. The 3/3 Mongoose jumped in the way of the potentially huge creature, forcing Alexander to remove four cards from his graveyard to keep his Psychatog in play. This brought Christoph just out of kill range, and when a Peek revealed an upcoming Upheaval, Mr. Witt unloaded his hand (sans any countermagic) and removed his entire graveyard from the game to reduce Mr. Lippert to a precarious one life total. 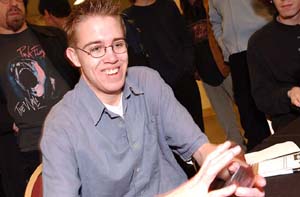 Indeed, an Upheaval the following turn set Christoph on the path of recovery. An Opt gave him a first of two Counterspells, and a Repulse set back the freshly summoned Psychatog three turns later. Neither player could break the game open, with a Peek revealing the aforementioned pair of Counterspells complimented by a 2nd Upheaval in Christoph's hand. One counter was used on a Ravenous Rat, and a second on a Fact or Fiction. This allowed the ½ hand eater to come into play once again, but in a strange case of deja-vu, it returned to whence it came via a second Repulse.

Finally, Christoph drew a Mongoose, and proceeded to cast his Upheaval in an attempt to lock down the game. Alexander used his Coliseum and an Opt to dig for any form of counter magic, but could only shrug helplessly as the Upheaval resolved. Quickly, he faced a 3/3 untargetable creature and a Forest on the very same turn, against his own board of nothing.

It looked as if the Mongoose might go all the way, but Alexander would have none of this. He played consecutive Ravenous Rats, and seemed to be back in the driver's seat. This very exciting game swung momentum again when Christoph summoned his 2nd 8/8 monster of the game. Since he had to tap all his mana to do so, Alexander seized the opportunity to bring back his Psychatog, which now had the potential to grow to a very healthy 14/15! Without an answer to all three creatures now in play, Christoph was forced to block with his 8/8 and 3/3 creature against the mild-looking ½ Atog . A mild looking ½ Psychatog which grew to 12/13, slaughtering the normally intimidating green threshold creatures. Christoph attempted to cast a Fact or Fiction in order to find a solution to the now more manageable Atog, but died to Undermine targeting his own spell.