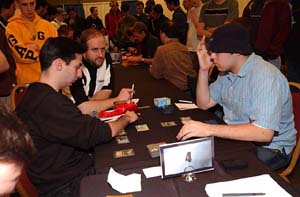 Jafari is running the black/blue Psychatog deck, which is easily the breakout deck of the Gateway. Levy is running a four color aggro green deck, with the usual Birds, Elves, Calls, Flametongue Kavus and Opposition, plus Mystic Enforcer. Levy's acceleration creatures may help him get threats past Jafari's countermagic, and the inherent card advantage of Flametongue Kavu and Call of the Herd will also be very important.

Jafari went first and played an island, while Levy started strong with Birds of Paradise. This allowed him to accelerate to a third turn Call of the Herd, which Jafari Memory Lapsed. Shadowmage Infiltrator then came down, leaving Jafari tapped out. Call of the Herd was replayed, and Jafari took his turn, sending in the Infiltrator. Levy now went into outrace mode, attacking with the elephant and making another. Repulse took one out of the equation, and Finkel continued to give Jafari more cards to work with. Levy tried to remedy the situation with Flametongue Kavu, but Jafari had Counterspell.

The elephant continued its attack, bringing Jafari to eight. Even though it seemed he was running out of time, Jafari was in no real danger thanks to the Rushing River in his hand. He played Fact or Fiction on end step, and Levy responded with his own. The piles presented were Mystic Enforcer in one pile, and Llanowar Elves, Counterspell, and two lands in the other. Levy thought for a bit, and took the four card pile. Jafari's Fact or Fiction now resolved. At this point, Levy was running out of time. Finkel was active and at work for a while, and Jafari had plenty of countermagic in hand to keep the game going in his favor. He improved his board position further with Psychatog, which resolved after a counterwar that left Jafari with only one untapped land. 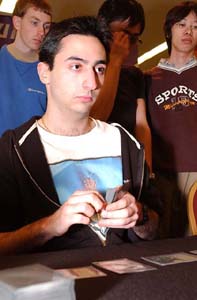 Levy cast Fact or Fiction revealing Opposition, which Jafari quickly put into a pile by itself. Levy took the Opposition and played it, and Jafari was tapped out and helpless to do anything about it. This was bad, but still very manageable for Jafari, who still had Rushing River in hand. Plus, Birds of Paradise was Levy's only creature, making Opposition less than impressive. The River bounced back Opposition, and when it came back into play a counterwar resulted, which Jafari won. The next turn saw Jafari play Nightscape Familiar and Fact or Fiction, which contained enough good cards for Levy to concede.

Levy went first, and opened with Birds of Paradise. Call of the Herd was cast on turn two, and flashbacked on turn three. Both elephants swung for six damage, bringing Jafari down to eleven life points. Spellbane Centaur then joined the team, and Jafari responded by playing Rushing River with kicker, killing off both elephants. The Centaur attacked and brought Jafari down to eight, and was joined by a second Centaur.

Slay was used on end step to kill off one if them, and Jafari tapped out to cast Lobotomy, which hit Flametongue Kavu. This left Levy with only one card in hand, which was a land. Jafari only had four lands in play and was going to lose next turn, so he was forced to play Psychatog, which was Counterspelled. If Jafari had one more land he would have been able to answer back with his own countermagic.

Jafari started off with a turn two Nightscape Familiar, and brought out Psychatog a few turns later. It was Counterspelled, and Jafari chose not to tap out and win the counterwar. This left him with mana available to answer Levy's potential threats. Play was slow for the next turns, as both players were hesitant to walk into countermagic. Jafari did have the upper hand in this situation, since he had a Nightscape Familiar attacking for a point of damage every turn. The monotony was finally broken when Levy brought out Mystic Enforcer, but Jafari used Repulse on end step. Levy thought for a bit, and allowed it to resolve. 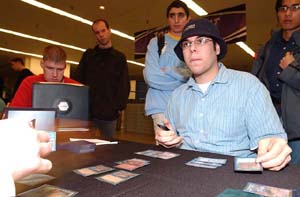 Jafari then played Fact or Fiction in main phase, and Levy used Gainsay to counter it. This cleared the path for Shadowmage Infiltrator to resolve. Levy had the answer and summoned Flametongue Kavu, which shot down Finkel. Jafari was now up against the ropes and played Opt, drawing into counterspell. The Flametongue attacked and was blocked by the Familiar. Opposition was played and Counterspelled, but Levy followed up with Mystic Enforcer, which resolved. The Enforcer and Flametongue came through for seven points of damage on Levy's turn, while the Familiar blocked and killed off the Elf. Jafari played a desperation Fact or Fiction, getting Psychatog over four other cards. Levy was now in a tough situation, because he could attack with the Enforcer, or hold it back in anticipation of a bounce spell that could potentially remove Flametongue Kavu and clear the way for a massive Psychatog attack. Levy decided it was worth the risk, and attacked for three.

The Psychatog and Familiar attacked back, and Flametongue Kavu blocked the 'Tog, which ate up some of the graveyard to stay alive. Hibernation soon cleared the way for an attack, and Levy had defeat etched on his face the moment the instant hit the table.