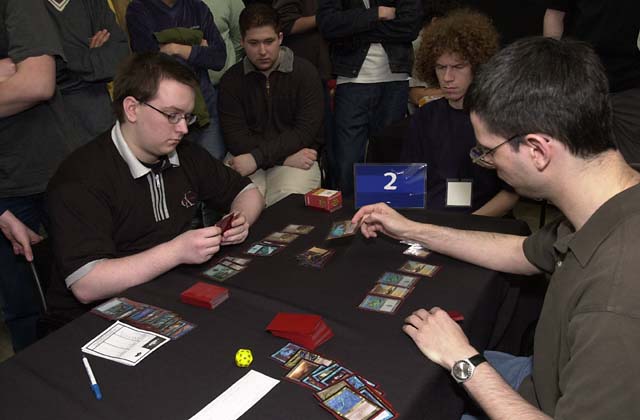 Two-time Canadian National Champion Gary Krakower has been reduced to a shell of his former shell. After a few glorious years on the Gravy Train, he dropped off, barely making it to Barcelona on ranking. He'll tell anyone who'll listen about his hard road back to the Tour. He hopes to take his next two matches with his Go-Mar deck.

Today he meets philosophical Everyman Jens Thoren. Piloting a U-B control deck of his own design, he is a careful player who marches down the road not taken to the beat of a different drummer.

Krakower mulliganed to start Game 1, but turned fortune around with his six-card hand. He had all three of his colors by turn three, and was swinging with a Galina's Knight. After two hits, Thoren Repulsed the Knight at the end of Krakower's turn. He chose not to replay it on his next turn, and so had the mana available to stop Thoren's Fact or Fiction with Dromar's Charm.

Thoren made a Ravenous Rat, catching a Plains from Krakower, and Recoiled one of his Salt Marshes. Krakower responded with Fact or Fiction. The cards came down: Exclude, Fact or Fiction, Island, Galina's Knight, Dromar's Charm. Krakower ended up taking Island, Knight and Charm, and discarded the Recoiled Marsh.

He untapped and tried to bring out his Knight. The counterspells flew back and forth. Exclude. Dromar's Charm. Undermine, with crazy old Krakower on the wrong end. He played out a second Knight, but was tapped out for Thoren's Probe with kicker. Both players discarded lands.

Thoren's Malice on the Knight started a second counter war. Spite met Undermine, which was in turn trumped by Dromar's Charm. Thoren followed that madness up with a Nightscape Familiar. He had two cards in hand. Krakower went for the kicked Probe, and met the third Undermine. 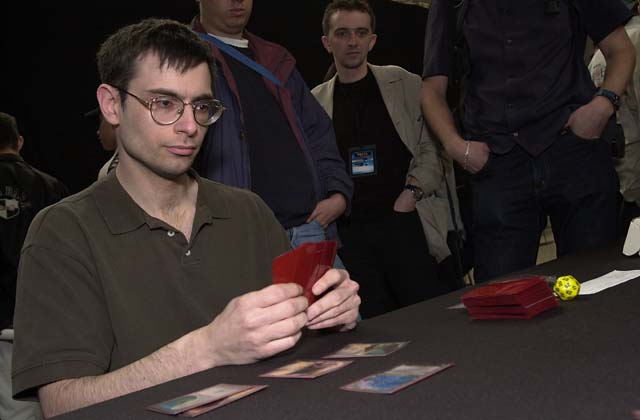 Thoren then Repulsed the Knight and drew Probe to remove it permanently. The road from there to victory was short and enlightening.

Both players wanted Gainsays and Lobotomies from their sideboards, but Krakower also wanted Crusading Knight, Dismantling Blow and Aura Blast. Krakower shelved his Excludes, as well as some Opts and Routs. Thoren took out some Recoils and Excludes, but not all of them. He also took out a Fact or Fiction.

With his crazy old back against the wall, Krakower struggled to keep a smile on his face. He couldn't believe that Thoren had the third Undermine.

The opening moves of Game 2 mirrored the first, with Krakower producing an early Knight and swinging twice before Thoren attempted a Repulse. This time, however, Krakower held Gainsay. His Knight knocked Thoren to 10 before the next spell was cast.

It was Thoren's unkicked Probe, developing his hand at the expense of two lands. Krakower attempted a Fact or Fiction, but was Undermined. Krakower untapped, attacked, and added Crusading Knight to his board. It was a problem Thoren had to solve quickly.

He played Fact or Fiction in his next main phase, ending up with two Nightscape Familiars. It didn't matter, though. Krakower had draw a second Absorb. Two Crusader attacks later, the match was even.

Krakower boarded in three Prison Barricades for Game 3. His victory had lightened his mood. He happily dissected the game with his opponent, admitting that it was a tough matchup.

Thoren began Game 3 with two Nightscape Familiars. Krakower put them on defense with an unkicked Prison Barricade, then tried a turn-three Knight. Thoren's only untapped Island fueled an Exclude.

Thoren untapped and played Ravenous Rats, catching a Probe. Then he Recoiled Krakower's only Plains, forcing him to discard Dromar's Charm. Krakower replayed the land, hiding the fact that he had drawn no others. Thoren Probed with kicker. Krakower Absorbed. Thoren Gainsayed. This left Krakower with one card in hand: Fact or Fiction. With only three land, however, he needed to topdeck another. 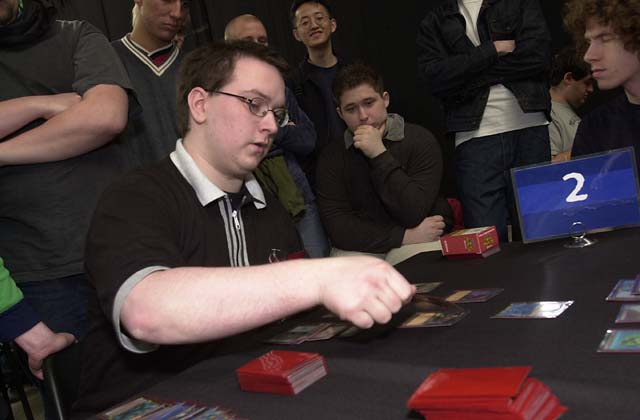 Afterwards, he would describe it as the one card in his deck he did not want to draw. His face fell, knowing that the game had gotten away from him. When Thoren Lobotomized him the next turn, he threw his cards onto the table in disgust.

Thoren began the slow beatdown. After pushing through one damage for a few turns, he Repulsed the Barricade. Krakower Absorbed, but was Undermined. Krakower kicked up his Barricade and started hunting for a counter. Thoren displayed Malice. Krakower stopped looking.

His final hope, a Crusading Knight, was Undermined.