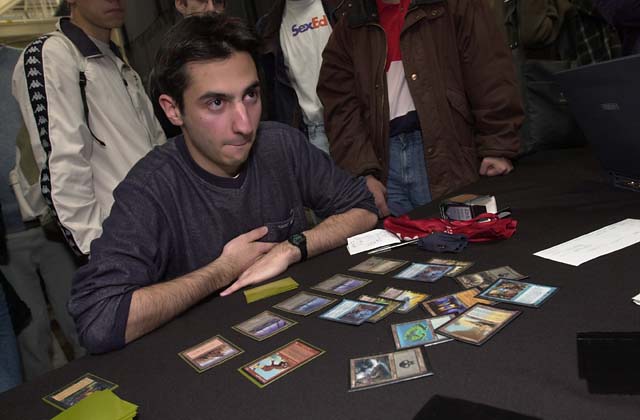 These players were only two matches away from a spot in the Masters Series and the nice payday that goes with it. Spain's Hector Fuentes had a Go-Mar deck and the support of the local crowd, while Raphael Levy of France was playing Red-Black Beats.

The first play was Raphael's second turn Nightscape Familiar, but this wasn't as strong as it would have been had it gone first, as it gave the Spaniard the opportunity to potentially Undermine his third-turn Blazing Specter. Fuentes didn't have an Undermine, and he didn't have the white mana for the Dromar's Charm in his hand, so he had to discard.

Hector played a Dromar's Cavern so that he could give the Specter -2/-2 when it next attacked, but Levy was relentless - he played a second Blazing Specter. Luckily, Hector he had drawn Exclude, so there was no loss of card advantage on the turn.

Fuentes's hand was looking rather nice as well - two Dromar's Charms, two Fact or Fictions and a Rout. One of the Charms took care of the Specter problem, and Raphael was left with only his Nightscape Familiar in play.

Levy thought for a little while about his next play - he could have played two Ravenous Rats, but instead he summoned Flametongue Kavu and killed his own Nightscape Familiar, hoping to bring some beats since he didn't need the Familiar's ability now that he had run out of Specters.

The Kavu hit once and then Hector cast a Fact or Fiction that revealed five spells. One of them was Teferi's Moat that is a nightmare for Levy's deck, so he was obviously considering putting that in a pile by itself. In the end he put an Opt with it as well, and surprisingly, Hector chose the other pile - Opt, Dromar, the Banisher, and Absorb.

This could well have been a mistake, and when he tapped three of his five lands to remove the Specter with Dromar's Charm, Raphael was ready with a Crypt Angel which Fuentes could no longer counter. The Angel is a card that Hector has to kill with a Rout as there is no other way of dealing with it in his deck.

Without seven lands, he might have been forced to tap out to cast it, so Levy brought back a Blazing Specter, which he hoped to force though. Hector didn't cast it straight away, choosing to go down to six life before casting Rout as an instant and then stabilizing.

He did indeed manage to Fact or Fiction his way into the two lands necessary to cast Rout as an instant, but he was low on life. When he tapped out, Levy would be able to Ghitu Fire him, but he only had six lands in play.

This meant that if Raphael's next draw was a land he would be able to kill Hector if he Routed, and if not Fuentes would sill have to find some way of stopping the Blazing Specter in three turns, since Levy would cast that if Hector Routed during the attack phase. 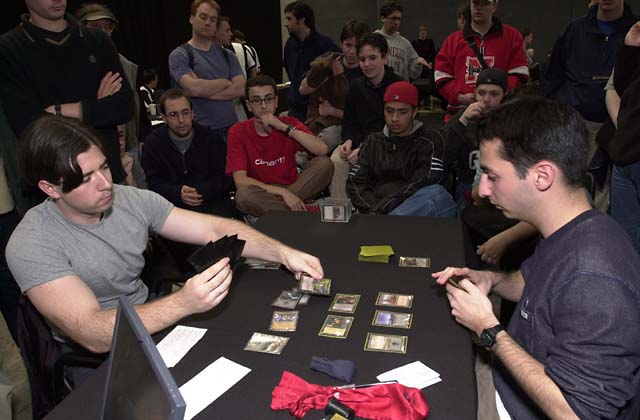 Hector chose to save Rout for Raphael's end step, which meant that he would be able to stop Blazing Specter, but this put him on three, and Raphael was now able to use Ghitu Fire as an instant despite the fact that he hadn't drawn another land.

Hector sideboarded in Disrupts and took out Galina's Knight, but decided to leave his Crusading Knights in the sideboard. Raphael brought in Planeswalker's Fury and hoped that Hector would leave his Aura Blasts in the sideboard, as indeed he had. The Fury dealt a lot of damage to Go-Mar if they get stuck with an uncastable Moat or Dragon in their hand.

After both players took a mulligan, the first play of the game was once again a Nightscape Familiar, but this time Levy didn't have a Blazing Specter for the third turn. In fact he was stuck on only two lands, which was unfortunate as it meant that his Addle was successfully Disrupted.

Raphael drew a third land immediately, but Hector had no intention of allowing Blazing Specter to attack this game - he Absorbed the first one and had a Dromar's Charm for the second, so once again Levy was left to beat-down with Nightscape Familiar.

This time Hector was at much higher life, so he was under almost no pressure, and even Levy's attempts to summon a Shivan Zombie were Excluded. Fuentes did allow Raphael to play a Skizzik, since the Frenchman only had three lands in play and couldn't pay the kicker.

This attack brought Hector down to a still-healthy twelve. Levy's Familiar was Recoiled, and then his Shivan Zombie was Excluded, and Fuentes even used a Rout to kill a lone Familiar when Levy replayed it. Hector didn't mind using Rout as a one-for-one since he had massive card advantage and a Yawgmoth's Agenda in his hand.

Raphael saw first his Voids and then his Skizziks removed from the game, and conceded when Hector attempted a third Lobotomy.

Hector thought for a while about whether to mulligan his six-spell hand containing an Opt, and eventually did. His six-card hand was better, four lands, Fact or Fiction, and Lobotomy.

He drew two more Lobotomies in his next two draw steps, but didn't have a Counterspell of any sort for Raphael's Blazing Specter. Of course, he chose to discard one of the Lobotomies.

Raphael put him deeper in trouble by summoning a second Blazing Specter. Hector cast Fact or Fiction in response to Raphael's attack but was unable to find either Rout or Dromar's Charm to remove Specters. Instead he took a pile containing three lands so that if he at least drew a Rout we would be able to cast it. 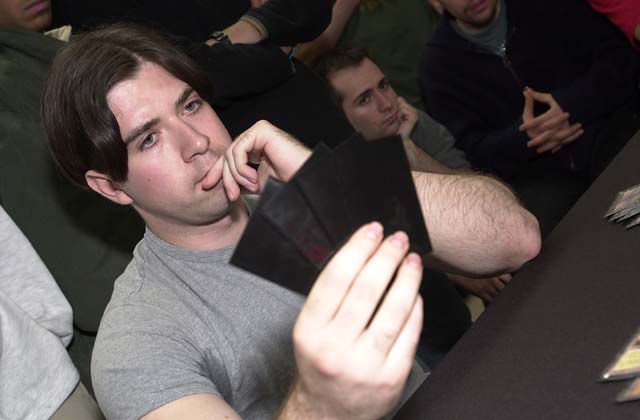 His next draw was Disrupt though, and the Spaniard's only play was a Lobotomy. Levy revealed a nice-looking hand of land, Ghitu Fire, Crypt Angel, and Thunderscape Battlemage, and Hector got rid of the Crypt Angels.

Fuentes managed to peel Rout off his deck though, so Levy's decision not to play Thunderscape Battlemage seemed to be a wise one. Hector was only on ten, and had no cards in his hand after the Battlemage got rid of the last two.

He managed to draw a Dromar's Charm to kill the Battlemage, but didn't have a Counterspell for Ghitu Fire, which sent Levy through to the finals of the Gateway.