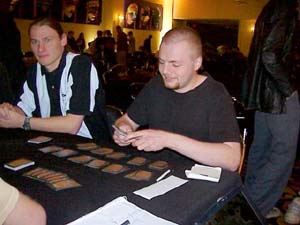 This was an all Scandinavian affair between the Swedish Jens and the Norwegian Nicolai. They were only two rounds away from getting into the Masters and a guaranteed $2000.

Herzog went first and played a turn two Werebear and a third turn Leaf Dancer. The Dancer was pretty good since Jens had Forests. Thoren played a Barbarian Lunatic, but didn't want to trade it one-for-one with Werebear, so he took the damage and went to sixteen.

The Swede killed Leaf Dancer with Flame Burst, and then had to kill it a second time, with a Thermal Blast, after Herzog brought it back with a Gravedigger. Nicolai played a Krosan Avenger but couldn't attack since the Barbarian Lunatic would always give his opponent card advantage.

This pause in the pace of the game suited Jens just fine, as it gave him the time to get to eight mana and summon his bomb: Vampiric Dragon. Nicolai slumped in his chair, signaling that the game was pretty much over, although he did wait until the Dragon had killed all of his creatures before scooping.

Herzog had a change of plan and made Jens begin, but initial impressions were that this wasn't really going to pay off for him, as the Swede played a first turn Chatter of the Squirrel, second turn Wild Mongrel, and third turn Lithatog. Nicolai didn't do anything at all until a third turn Last Rites, leaving Thoren with only an Anarchist, and he went down to twelve.

He didn't do anything on his fourth turn, either, waiting until Jens attacked all out before playing an Elephant Ambush and blocking the Lithatog. Jens sacrificed two lands to keep it alive, and Herzog went down to eight. 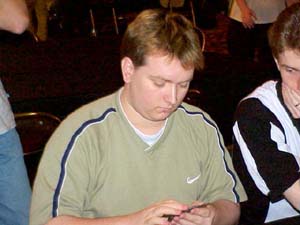 Nicolai had chance to stabilize slightly as Jens was hesitant to attack all out again. Nicolai played a Rabid Elephant and Jens just attacked with the Wild Mongrel, discarding two cards to deal with the Elephant. Nicolai cast nothing on his next turn, but he had the ability to cast Elephant Ambush from his graveyard, so Jens just attacked with the two Chatter of the Squirrel tokens. Herzog played Beast Attack from his hand instead, and blocked a token. He played the Flashback on both Beast Attack and Elephant Ambush, and used a Gravedigger to fetch back the Elephant. This gave him a pretty overwhelming board position, and Nicolai started to attack even though he was only on seven life.

Jens played a Barbarian Lunatic and attacked with it. Herzog blocked it with his Gravedigger, and a combination of the Lunatic's ability and a Firebolt dealt with a Rabid Elephant. The board was rather stalled now.

Herzog had an Elephant token, a Beast token, Krosan Avenger, Otarian Juggernaut, and a Fledgling Imp, while Jens had a Squirrel token, a Wild Mongrel, a Lithatog and a Halberdier. Nicolai sent the Juggernaut and Krosan Avenger across with six cards in his graveyard, losing the Juggernaut to Halberdier just to gain Threshold for the Avenger and the Werebear he had drawn that turn.

Jens killed the Werebear with a Thermal Blast, and Flashbacked the Firebolt to kill the Fledgling Imp. Neither player attacked for a few turns, but Jens was drawing only land, and Nicolai kept drawing creatures to tilt the game in his favor, as he cast Crashing Centaur and Krosan Archer in consecutive turns. Nicolai began to attack and Jens had to discard his entire hand of four land to kill off the 5/6 Crashing Centaur. Jens was now on four and Herzog played a Leaf Dancer.

Thoren's topdecking skills were very much in order, as he drew Shower of Coals to kill the two token creatures and Krosan Archer, and he could now attack himself, leaving the Lithatog back on defense against the Krosan Avenger and Leaf Dancer. Nicolai only had one turn to find an answer himself, and he showed that it wasn't just Jens who could topdeck when he drew Ghastly Demise to kill the Lithatog and attacked for the game.

Thoren started again and the first play of the game was his third turn Barbarian Lunatic. Herzog hit him again with Last Rites stripping the Vampiric Dragon. Herzog discarded three cards and left Jens with only two lands in his hand. Once again Jens drew lands, while Nicolai was stuck on three lands but could cast plenty of spells.

He summoned a Krosan Avenger, which attacked alone until Jens tapped out for an Anarchist. This gave Nicolai the chance to play Ghastly Demise on the Lunatic without losing card advantage, and he played a Werebear as well.

Thoren drew another non-land card, somewhat rare for him in the last two games. It was a Gorilla Titan, which stopped Herzog for a while. Nicolai had only five cards in his graveyard, so his Werebear was still an insignificant 1/1. Jens drew a second Lunatic and dealt with the Bear immediately, but his lack of spells was still hurting him.

Nicolai played an Elephant Ambush and then a second Werebear, which Jens had no way of dealing with short of trading his Gorilla Titan for it. Nicolai followed up by using a Gravedigger to fetch back Crashing Centaur, and replaying it.

Jens had nothing but land in his hand, and his draw of Firebolt wasn't enough to stop Herzog attacking for the win on his next turn.