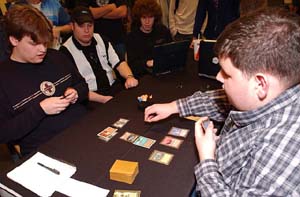 OMS's first-turn bird let him get a Call token into play before Davis had Syncopate mana up. With that, he was content to wait Davis out. Davis cracked on his third turn, tapping out for Shadowmage Infiltrator. OMS made him pay with Flametongue Kavu.

Now Davis was in trouble. He tried to stem the bleeding with Psychatog. OMS Iced. Then he tapped three more for Raging Kavu, dropping Davis to three. Davis drew and shrugged his shoulders. "That's game." 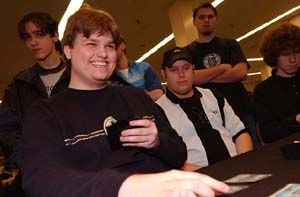 Davis kicked off for Game 2, and answered OMS's Llanowar Elf with Nightscape Familiar. OMS came right back with Spellbane Centaur, negating Davis's Repulses. Davis chose to pass it right back, leaving mana up to counter OMS's next play. OMS attacked, and turned it back to him, missing his third land drop.

That was good news for Davis, who tapped out for Fact or Fiction. He scored Slay and Infiltrator over Psychatog and two lands. He untapped and threw down a pair of Infiltrators, tapping out. OMS made a Raging Kavu at end of turn, then ripped City of Brass and attacked.

One Finkel had to trade with the Raging Kavu, and the other dropped to OMS's Flametongue. Davis was at fourteen. He Slew the troublesome Centaur. With just two mana up, he let Flametongue by, countering a subsequent Spellbane. He untapped, played a second Familiar, and gave it back to OMS, holding Hibernation, Repulse and Recoil. 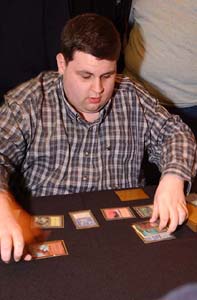 OMS tapped two for Fire on both Familiars. Davis regenerated one and tried to Repulse the other. OMS Fired again in response. That was the death knell. Davis took the beats, then drew nothing. OMS played an unkicked Skizzik, and Davis had to drop his whole hand just to stay alive. He drew swamp, and wished OMS good luck in the round of four.