Before the players could start their game, a judge asked them for their decks, so they could be checked. When the judge attempted to take Raphael's deck, he said that he had made an error in de-sideboarding, and attempted to change the deck. The judge did not allow this, and took the deck into the judges' area- along with Mike Donais, the Head Judge of the Gateway Tournament.

The judges came back, and asked Raphael Levy for a statement regarding what had happened. After hearing his arguments, the judges came to the conclusion that the correct penalty for the offense was disqualification without prize for cheating and misrepresenting information to tournament officials. 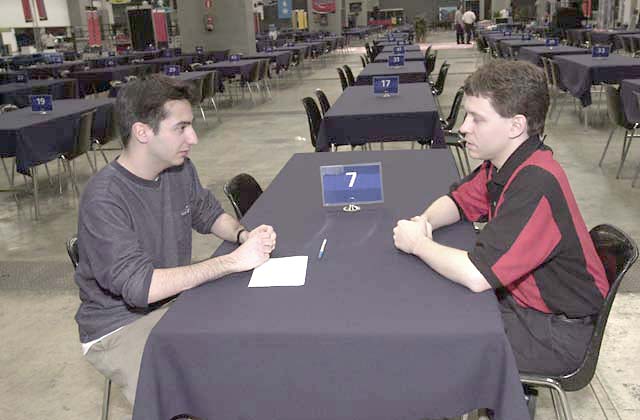 Head Judge, Mike Donais said of the disqualification, "Levy presented a deck to his opponent that did not reflect his decklist accurately. Levy had the 3 Urza's Rage in his main deck instead of his sideboard, as recorded on his deck list. When the judge took Levy's deck for a deck check at the start of the round, Levy picked up his sideboard and stated that there was an error. Levy stated that the 3 Urza's Rage reflected the same decklist that Levy used in Tokyo and were only three of the seven cards that Levy sideboarded in against his previous opponent. Because this would have given him an advantage against his opponent, who was also playing a Go-Mar deck, he was disqualified. Other facts, such as the changing of his story, affected my decision and led to the penalty that I gave him." An official DCI investigation is pending.

Levy was unhappy with the penalty he had received, and said, "There was no way I could cheat in that position, since the match was being covered by the Sideboard, and you (Mark Wraith) knew that the Urza's Rages were in my sideboard, so that I could not have cast it in the first game. The Rats were in my sideboard in Tokyo and I had just forgotten which way round they were this time. I think a game loss would have been the correct penalty."