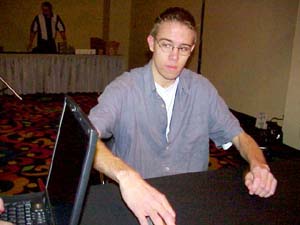 Dutch player Alexander Witt has earned a lot of respect in his home city of Amsterdam, and better-known players like Noah Boeken have been predicting great things for him. "He just doesn't lose at this format," says Boeken. Englishman and Sideboard reporter Mark Wraith didn't hesitate to pick Witt to win this table and advance to the Masters itself. Witt's opponent with the Masters slot on the line was Japanese veteran Itaru Ishida. Ishida was the first Japanese player to make a Pro Tour Top 16 and captained the Panzer Hunters to a runner-up finish at the Team Masters in Tokyo. Ishida was also fresh off a spectacular win in his match against Billy Jensen - game 3 ended when Ishida put Demoralize on the stack and then responded with Rite of Initiation for fie. Interestingly, both Ishida and Witt - along with both finalists at the other Gateway draft table - drafted green decks. Ishida's is a fast red-green while Witt's is a green-blue build with lots of green threshold creatures and lots of blue threshold enablers.

Ishida was on the offensive immediately in game 1. His Halberdier and Druid Lyrist kept going in while Firebolt cleared a pair of blockers out o the way. Witt saw that Savage Firecat was coming when he used an early Peek and he didn't seem to have any real answers to it. However, he used a pair of Repels quite effectively and managed to keep the Firecat in check until he reached threshold. Witt's Werebear and Metamorphic Wurm went large once 7 cards hit Witt's graveyard and Ishida couldn't do any better than trading the Firecat for the Wurm. At this point Witt had just six points of life left and he knew Ishida had a Flame Burst in his hand. Ishida went for the kill by playing Kamahl, Pit Fighter, but Witt had the Syncopate he needed to survive the turn. Witt had played a great game up to that point, but he then made a critical mistake. He chose to block and kill a Pardic Firecat (the "counts as a Flame Burst" guy) when Ishida sent all four of his creatures in. He could have instead blocked and killed a Cartographer. Both plays leave him at 3, but Witt's play meant the Flame Burst in Ishida's hand was lethal. Ishida untapped and pointed Flame Burst at him, tapped the Firecat and said "three." Witt could do nothing but say "oh," shrug, and start shuffling up for game 2. To be fair, it would have been quite difficult for Witt to avoid killing that Firecat or taking a hit from it for the rest for the game. 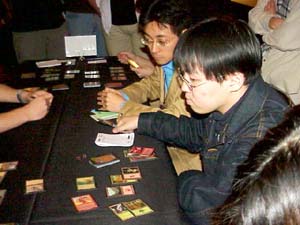 Witt was the aggressor early in game 2 with a Wild Mongrel and a Krosan Avenger. Ishida traded Spark Mage for the Avenger and then cracked back with a pair of hasty Pardic Firecats. That forced Witt to leave his Mongrel back on defense. Ishida waited for Witt to tap most of his mana and then played out Kamahl when he knew it couldn't be Syncopated. Witt responded with a rare of his on: Krosan Beast. Witt sacrificed a land to play the squirrel beast and discarded the three spare land in his hand to Wild Mongrel so he could get to threshold. Ishida chumped it with a Firecat, shot it with Flame Burst, and then finished it off with Kamahl. Kamahl then had time to pick off a Krosan Avenger and suddenly Witt was down to just a Wild Mongrel plus two cards in hand. Witt fought gamely against the legendary Pit Fighter, but when Ishida had the Flame Burst he needed to kill off the 8/8 Krosan Beast, there didn't seem to be much that Witt could do. Witt made Ishida's life as difficult as he could, discarding cards to Wild Mongrel to save it for Kamahl and regenerating it once with a Refresh that Ishida failed to anticipate and could have played around if he wanted to. Witt then drew a Metamorphic Wurm - 7/7 since Witt was at threshold - and somehow Witt was still in the game. Ishida kept throwing creatures at Witt's fatties and then finishing them off with Kamahl, but Witt kept drawing more fatties. Gorilla Titan came off the top and Ishida had to top deck a creature to stick in front of it. Then Witt drew Werebear and Ishida was forced to take a hit down to 3 while hoping to draw a creature. Ishida drew Firebolt, which was good enough to dispatch the Werebear. Witt dug through his deck with a pair of Careful Studies, but could find no ay to deal those last three points of damage. Kamahl finally got to go on the attack and the game was over two turns later.