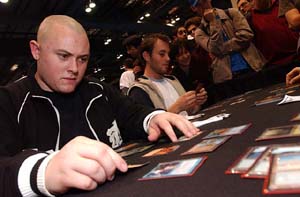 The penultimate round of the Masters Gateway tournament pit Peter Szigeti against Kamiel Cornelissen, two players notorious for their distinctive playstyles. Kamiel is quiet and reserved, and his "cautious" play style inspired the institution of time limits at this year's invitational. PTR is anything but reserved, having drawn more attention for his antics than for his tournament results. Both players are certainly drawing notice for their play today, however, as the winner of this match stands only one round away from a Masters berth.

Peter wins the die roll and chooses to play first in Game 1. The game starts as so many do in this format, with morph creatures staring each other down on turn three. Peter plays a land and attacks with his, sending Kamiel to eighteen, and furthers his board position with a Screeching Buzzard. Kamiel sends back, and Peter chooses not to block – a dangerous proposition against an opponent with mountains – but Kamiel's morph creature apparently isn't a Skirk Commando, as the Dutchman merely plays another man face down. Peter sends both of his creatures on his turn, and when Kamiel chooses not to block, flips over Fallen Cleric, sending to twelve.

When Kamiel simply passes the turn back, Peter senses something is up, so he attacks only with his Screeching Buzzard, not wanting to lose his Fallen Cleric to a Daru Lancer. Unfortunately for the American, Kamiel has one better, flipping over Quicksilver Dragon to eat the Buzzard. Both players get a good laugh when Kamiel discards the decidedly sub optimal Spitfire Handler to the Buzzard's ability. Sand skin at least takes some of the sting out of the Quicksilver Dragon, and PTR plays a face up Headhunter – telegraphing some sort of tribal effect to come.

Kamiel sends in his Morph creature, and PTR declines to block, dropping to 16. Gustcloak Sentinel comes down for the Dutchman, gumming up the ground, but Szigeti comes back with Harsh Mercy – which Kamiel takes more than a moment to read.

"This is the prerelease for Kamiel" – PTR

When the Harsh Mercy finally resolves, Peter chooses Clerics and Kamiel soldiers, sending the Quicksilver Dragon and Kamiel's morph creature – which turns out to be Gravel Slinger – to the graveyard. Peter passes the turn, and Kamiel attacks with his Savior, bringing Szigeti to 13, and plays out a pair of Morph creatures, inspiring Peter to lament his perhaps premature use of Harsh Mercy. Peter draws and attacks with his Fallen Cleric, trading for a face-down Disruptive Pitmage, but the Zombie-Cleric is quickly returned to Szigeti's hand when he takes out the Sentinel with Cruel Revival.

The following turn is ugly for the American, as Kamiel's remaining morph creature turns out to be Skirk Commando, killing Szigeti's headhunter and dropping him to eleven. Kamiel follows up with Nosy Goblin, to which Szigeti can only replay his Fallen Cleric. The cleric blocks the Commando, but Nosy Goblin gets through for damage before it takes out the Morph Szigeti drops the following turn. A Szigeti Daunting Defender gets Pacified, but its mere presence allows a Profane Prayers to kill Embermage Goblin the following turn.

PTR, however, is out of gas at this point, as he goes several turns playing nothing but land while Kamiel gets some attacks in with a Morph creature. PTR looks like he might be able to stabilize with a Grassland Crusader, but Crowd Favorites comes down on the other side of the table. A few tapped creatures later and the players are shuffling up for Game 2.

While they're shuffling, Kamiel is his usual quiet self, while PTR inquires as to whether I'm doing "actual bona fide Sideboard coverage". I inform him that "yes, in fact, I am," to which he simply replies, "I don't believe you." The nerve of some people. I mean really.

Game 2 starts off, once again, in classic Onslaught fashion, with only a cycled Renewed Faith from Kamiel before it's time to start playing morphs. This time, however, Kamiel blocks, sending Fallen Cleric and Mistform Shrieker to the graveyard. Peter has no turn four play, and Kamiel once again has Gustcloak Sentinel, which looks much less impressive when Szigeti drops Daunting Defender. Improvised Armor solves that problem, however, making a 5/8 Soldier, which swings in to bring the life totals to 15-22. Szigeti swings back and plays a second Daunting Defender, making his clerics nigh impossible to kill with damage. Kamiel attacks once again, putting Peter to ten, and drops a pair of Morph creatures.

Peter answers with Grassland Crusader – a Soldier-Cleric, in case you're curious – and Kamiel sends in his Sentinel. When Peter triple blocks, Kamiel pulls the monster out of combat, not wanting to trade his 5/8 for a single Daunting Defender.

Crowd Favorites looks to swing the game in Kamiel's favor, but PTR drops a Shepard of Rot and takes out the tapping machine with a Profane Prayers for four. Kamiel has no play, and PTR Cruel Revivals the 5/8, getting back Fallen Cleric, and tests Kamiel's Morph creatures by sending in a single Daunting Defender. When Kamiel doesn't block, Szigeti decides the coast is clear, shipping more of his team the following turn now that he doesn't have to fear losing them to a huge surprise blocker. Shepard of Rot hastens the bleeding, and when it becomes clear the life loss will kill him the following turn, Kamiel packs up his cards, revealing a miserable collection of face down creatures.

Game 3 saw much less interaction than either of the previous two, with neither player having a spell to cast before turn four – Peter because he had only plains and a hand full of black cards, and Kamiel because he failed to play a land on turn three. When Kamiel cycled Lay Waste on his fourth turn and still failed to come up with a third land, it was clear the end was near. That is – it would've been if Peter had anything more impressive than a Gustcloak Skirmisher and a Doomed Necromancer to attack with. When Kamiel found a third land – and then a fourth – and took out the Necromancer with Shock and started playing his own morph creatures, it looked like he might be able to get back into the game.

Szigeti, however, had other plans. With a fist full of removal spells, Szigeti pressed his advantage, playing out of Shepard of Rot and punching damage through. When Kamiel passed the turn back with a single Morph creature in play and five mana untapped – one of them blue – Peter respected the threat of Quicksilver Dragon, playing Pacifism before his attack phase. Kamiel answered back with a Pacifism of his own for the Skirmisher and another morph creature, but Szigeti's life advantage proved to be too much. A second Shepard of Rot increased the clock, and when Kamiel played out two morph creatures and passed the turn, PTR played Harsh Mercy, decimating Kamiel's board and leaving his Zombie-Clerics as the only creatures on the table. Rather than wait until Szigeti's turn to see the Shepherds activated for the kill, Kamiel extended his hand.