The Geist Effect, and the Variations of UWR

It's amazing to me how much can be changed by so little. UWR has been one of the most successful archetypes here at Pro Tour Gatecrash, putting a whopping 28 players into Day Two. However, this is only in the most generic sense. The umbrella of UWR appears narrow at first, but actually encompasses far more range than is realized at first glance. Among all of the UWR lists here at the Pro Tour, the majority of the cards in the main deck are identical. They run nearly identical mana bases. They run the same core of creatures. They even tend to run the same general removal suite. Despite this overwhelming similarity, in truth, the decks couldn't be more different. The reason for this perceived similarity but hidden difference comes down to the roles of a few cards in the deck.

First up is Geist of Saint Traft. At no point has the Geist been a "must include" in UW-based Standard lists, and one needs to look no further than last season's UWR Flash deck to see a successful deck that doesn't include the powerful creature. Still, for those UW-based decks looking for a massive punch and a definitive clock, it was hard to do better than the hexproof Geist. It was hard to deal with outside of mass removal and combat, and it ended games quickly.

Still, the purpose of the Geist is exactly as detailed two sentences ago: it is incredible in decks that want to put an opponent on a quick clock. In decks that look to play the control game, the Geist doesn't perform a role that matters. Those decks look to stretch the game out before winning either incrementally or in one fell swoop. Sure, the Geist can end the game quickly for those decks once they've hit that late game, but in the early game, the Geist is more than useless.

"Geist of Saint Traft has been amazing for me so far," said Alex Gerlock. Gerlock, a San Diego native tearing it up at his first Pro Tour, has been riding the Geist and the aggressive bent of the UWR deck to a very impressive 10-3 record to this point in the tournament. "This version of the deck is designed to be a tempo deck. I have a bunch of removal, like Searing Spear, Pillar of Flame, and Unsummon, which can clear the way for Geist or Boros Reckoner. All it takes is a couple of swings and I'm usually able to finish the job with a Boros Charm or some other burn."

When asked about the Geists weaknesses, Gerlock admitted that it doesn't do incredibly well when an opponent is able to stick enough threats to have a blocker, but the real threat comes in the form of cards that can get around hexproof, such as Liliana of the Veil.

"Opponents with Liliana are pretty problematic," he admitted. "If I think my opponent has her, I have to be careful to lead with another creature, like Boros Reckoner, in order to protect the Geist. It really is the best attacker in the deck."

To go along with the tempo strategy, Gerlock has left his Supreme Verdicts in his sideboard, preferring to bring them in against more aggressive decks, particularly Gruul Aggro, which is capable of putting a large number of creatures into play in short order, which is a nightmare for Geist. In these cases, Gerlock transitions into a more controlling deck, though he leaves the Geists in his deck alongside the Verdicts and Rolling Temblors. 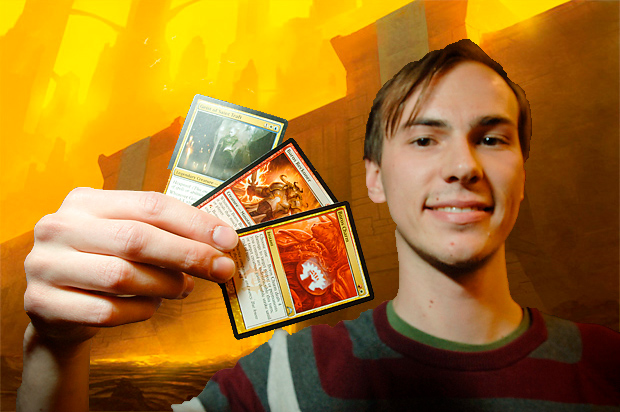 Alex Gerlock, San Diego Pro Tour Qualifier winner, has had a lot of success with his Geist-powered UWR deck at his first Pro Tour.

"All I want to do is make it around the turn against those aggressive decks," he explained. "Once I get the chance to reset the board, I can drop a Geist of Saint Traft onto a relatively empty board and let my tempo engine take over from there."

Another card is Supreme Verdict. Just as the Geist of Saint Traft is specifically tailored to an aggressive tempo-based strategy, Verdict is the ideal card to draw games out for a UW-based control deck. Against the aggressive decks in the field, control decks that lack a way to interact with the board early need that hard reset in order to assert themselves and gain control. Surrounded by Azorius Charm and the occasional red removal spell, the Verdict allows control players to carefully maneuver themselves into position for a massive Sphinx's Revelation to seal the game for them.

Gerry Thompson piloted his control version of UWR to a nearly flawless record through the first three-quarters of the tournament. As expected, it contained a number of methods to control opponents' creatures, but no Geist of Saint Traft. 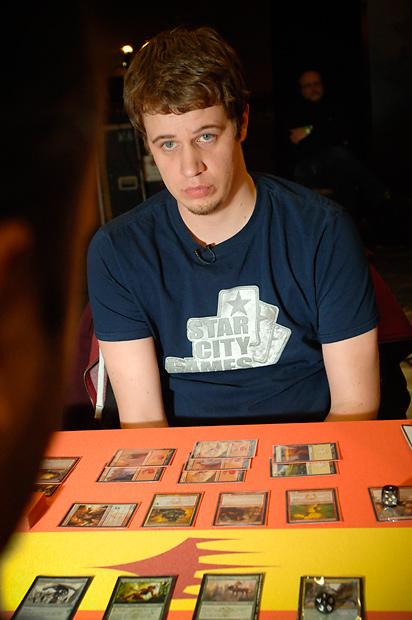 Gerry Thompson has also had success with UWR this weekend, crushing opponents in a sea of card advantage thanks to multiple copies of Sphinx's Revelation.

"Geist does the exact opposite of what this deck is trying to do," Thompson explained. "This deck wants to use its cards to trade one-for-one with opponents and then refill my hand with Sphinx's Revelation. I'm not trying to attack my opponent to death like Geist wants you to do, and he doesn't fit the attrition strategy, so he doesn't belong in the deck."

Instead, Thompson has chosen to run a tremendous amount of flexibility, relying on pinpoint removal and disruption to survive the early turns, whittling away an opponent's ability to fight. Once both players are spent, one of his three copies of Sphinx's Revelation refills his hand and resets his life total.

As should be apparent by now, these two cards are wonderful for one particular style of deck, but suboptimal in the other. As such, simply the act of adding or removing Geists effectively changes the goal for your deck. One new card that is furthering the potentially observed ambiguity between these two strategies is Boros Reckoner. At first glance, it is very apparent that the Reckoner is a tremendous card for aggressive strategies, such as those that employ the Geist of Saint Traft. The Geist suffers against other creature decks because of its fragility and weakness in combat. In those situations, the Reckoner shines, providing a perfect foil for the Geist.

"Against decks where my Geist would get blocked, Reckoner allows me a constant stream of damage," Gerlock explained. "They either block it, taking damage and clearing the way for my Geist, or they just take the damage and get one step closer to me being able to finish them off."

Much less obvious is the impact that Boros Reckoner has on the control decks. As described earlier, the control decks need to do whatever they can to interact with the board early in order to stave off aggressive decks. With the Reckoner, they have an incredibly powerful way to do just that. The Reckoner absolutely dominates combat and often results in a two-for-one, exactly the kind of attrition that a deck aiming to cast a big Sphinx's Revelation is looking for.

"Reckoner just stops aggressive decks cold a lot of the time," Thompson admitted. "Even if they decide to burn it off with a Searing Spear, or something like that, it gets to eat their best creature. No matter what, I'm still getting my two-for-one."

Unfortunately, the Reckoner's tendency to slow combat down and leave a cluttered board in its wake makes Supreme Verdict, once the cornerstone of UW-based control decks, much worse. In addition to negating much of the advantage of Supreme Verdict, the Reckoner's ability to inherently generate card advantage takes away a lot of the reason behind wanting to play Verdict in the first place. To circumvent this, many players have begun to latch on to Mizzium Mortars as an alternative to Supreme Verdict. Not only does the Mortars allow players to clear away opponents' creatures while leaving theirs intact, it is capable of acting simply as another single-serving removal spell if the situation warrants it.

Mizzium Mortars exemplifies the UWR decks of current Standard. Despite similarities in basic appearance and a large number of shared cards, there is a night and day difference between the ways that they play out. By simply changing a few cards, the focus and strategy of the deck can be completely changed, proving the central shell's unmatched flexibility. Yet, as Thompson, who is known for tweaking and perfecting the last five or six cards of championship decks can tell you, it isn't the core that matters. It's those last few cards that make all the difference in the world.