our mana is more important than your spells."

That quote, attributed to Sam Black, is the crux of Bob Maher's plan for drafting Return to Ravnica Block. "You have to have good mana," Maher said. In this Limited format, the idea behind aggressive decks is to be as close to two-colors as possible. Martin Juza, Zvi Mowshowitz, and many other players already shared what that means for Draft. Maher's approach is entirely the opposite.

"Some people took it too far to say you just have to have two-color decks no matter what," Maher continued, "I firmly disagree with that point of view. Having good mana is more important (other than the bombs) than having slightly upgraded commons and filler cards. As people saw in my draft, I took Gates over a lot of other things because now I'm playing a white-blue deck that has nine blue sources and nine white sources [of mana], but I'm also splashing a red card, a black card, and two green cards and I have three sources for each of those. In most games that hit turns seven to ten, I should have hit my off-color sources." 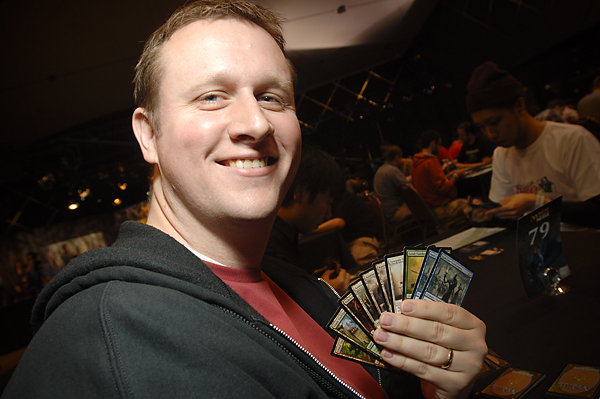 Hall of Famer Bob Maher firmly believes that the mana of your deck is one of the most important aspects to keep in mind when drafting Return to Ravnica Block.

What makes splashing so many cards useful? "Those cards make a big difference in my deck. I have Haunter of Nightveil, which gives opponent's creatures -1/-0, Warleader's Helix, Nimbus Swimmer, which if I get a lot of mana out since I have a pretty defensive deck can make a big difference, and Saruli Gatekeepers, the gain 7 life creature. Even if someone has a good, aggressive two-color deck, if I draw my mana -- and my mana is pretty good -- I still stand a very good chance."

Gaining life is a theme throughout the cards Maher's splashing. "I have Warleader's Helix that gains 4, Gatekeepers that gains 7, Fall of the Gavel that gains 5, a lot of high toughness creatures that allow me to get to the six and seven casting cost fliers, the Nimbus Swimmer, and stuff like that."

During his Day Two draft (which can be found in the Draft Viewer), Maher noted when several choices happened for him. "The Warleader's Helix versus Izzet Guildgate. I mean, it's just a removal spell but it's such a huge swing in a removal spell. You can really get somebody in an alpha strike. I'd be disappointed if I didn't have that in my deck, so I ended up taking it over the Gate. But I saw two Flux Chargers, which are really good. Those are two of the most painful cards I had to pass, but it just came down to the fact that they're really good but sometimes they're just 1/5 fliers and I'm not going to be disappointed when they're not in my deck compared to Gates and other things."

Maher underscored the importance of mana with another tip. "I actually go out of my way to pick up two or three Cluestones," the common mana-fixing artifacts in Dragon's Maze. "I think they're tremendously valuable, especially with the Gatekeepers and things like that. I don't ever really count on getting the Gatekeepers; I always take the Gates first and see what Gatekeepers happen to come. They're not an integral part to the deck."

Maher had a succinct summary for the multicolor approach. "It's always just making sure your mana works. Always. If your mana works and you have more powerful spells, you have the advantage in the match."