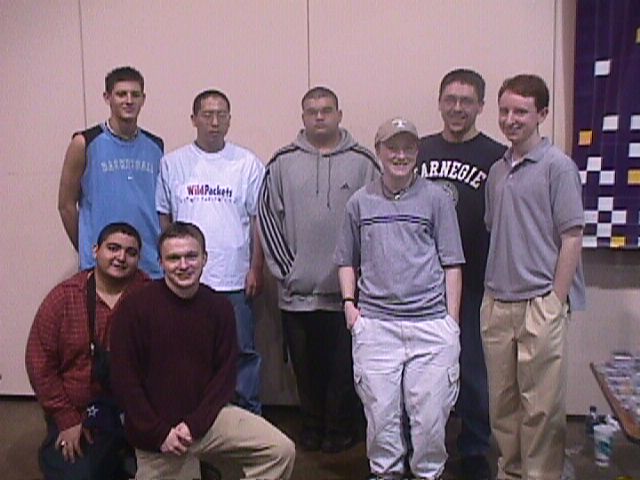 After two days of constructing sealed decks, drafting decks, attacking each other with creatures, and surviving on junk food and depriving themselves of sleep, eight competitors have earned their privileged spots in the final draft of GP Atlanta.

The first seed is Andrew Johnson. Andrew is a 19 year old Business student at Carnegie Mellon University. He lives with Eugene Harvey, Mike Turian, and Dan Silberman, all accomplished Magic players. When he isn't playing Magic he likes to read, play chess and spend time with his girlfriend. Lately he has been spending much of his time as one of the testers playing MTG Online. Andrew is originally from Houston, Texas. He has many tournament accomplishments includeing top 2 and top 4 at the two team PTs in NY. He also made day two at PTNY99, PT Barcelona, PT London, and PT New Orleans. He is also a former Texas State champ and won the Gulf Coast Jr. Championships in 97.

Second seed is Brad Swan. Swan, 21 goes to the University of Delaware where he studies accounting. He's been playing since Fallen Empires. Brad and his father Tom Swan are both familiar faces at the GPs. His father won GP Boston and soon after Brad proved himself by making top 8 at PT Barcelona. Brad is also the current Delaware state champion. He also made top 8 at Philly. Brad wants to win this GP to prove to Mike Flores once and for all that he is indeed better than his dad at Magic.

Bin Chen came in third after the swiss rounds. He is originally from China, but has been living in Atlanta for the last seven years. He holds a job as a database administrator. He has been playing competitive Magic for a long time now. Chen has been to two Pro Tours, PTLA2 and PT Atlanta.

Fourth seed, Antonio DeRosa is originally from Palermo, Italy. He is currently going to school at the University of Central Florida in Orlando where he studies international business. He's been playing since Ice Age. Antonio has been a rising star in Magic lately. He took 40th at PTLA, 18th at PT Tokyo and 26th at World Championships this year. He also made top 32 at the first GP Atlanta.

Matt Linde is the fifth seed. He is a prolific money drafter with William Jensen and a regular competitor at the Pro Tour as well as most American GPs. Linde is 20 and goes to the University of Maryland where he studies electrical engineering. He won US Nationals in 98 and finished top 4 at Worlds the next year. He also finished top 4 at GP Dallas last year.

Eugene Harvey, 20 is the second member of Team CMU to make top 8 and has been undefeated the entire tournament except for the round he dropped to teammate and roommate Andrew Johnson. He studies Computer Science and Music at Carnegie Mellon University. Lately he plays hour after hour of MTG Online as a playtester. He finished third at US Nationals this year, took 12th at Worlds, 1st in the team portion of Worlds, and top 16 at PT New Orleans.

Craig Wescoe is in his second GP top 8 in a row. He made top 8 last month at GP Minneapolis. He's a student at the University of Tennessee-Knoxville where he majors in Business. Wescoe has attended nine different Pro Tours and has never finished in the money. Despite all the rumors I try to spread about Wescoe, he does not cheat.

Alex Borteh rounds out the top 8 as the eighth seed. He has been called "the hottest player in the USA right now." Borteh goes to school at Ohio State University. Borteh has had a number of high finishes in the last year including top 8 at Nationals, top 2 at Worlds, top 8 at GP Denver and first place in the Sideboard Team Challenge.

Who will win? Keep you eyes right here on the Sideboard. Your source for up to the minute Magic mayhem.