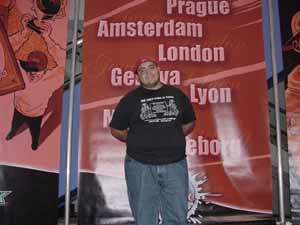 Antonino is a 21 year old from Florida. Currently he’s just graduated from college after studying International Finance. De Rosa is fairly well known on the tour through a larger than life presence. He’s been playing since Ice Age and has been on the Gravy Train for the last three years. Despite attending something like the last seventeen Pro Tours De Rosa has had consistent rather than high finishes. He has a couple of PT top 20’s and this is his 4th GP top 8. Antonino has family in Italy and with Worlds being held in Berlin he chose to visit them for a couple of weeks before attending this GP.

As part of CMU Togit he chose to play Oysp’s updated version of the RW slide deck. He felt it was a good choice as he expected a high proportion of goblin decks. Although this was correct it didn’t quite work out for him as he only got to play against one goblin deck in the entire tournament. He didn’t expect the deck to be as good against control but it turned out to be okay. He attributed this to adopting an unusual strategy. While in the RW mirror most players try to set up for the long game Antonino chose instead to go more for an aggressive early game with Rifts and Knights. He sides out Slide for this reason, mainly because the Incinerators and Spark Spray are also sided out, leaving the deck fewer cheap cyclers. While slightly weaker in the mid-to-late game he feels getting in 6-8 damage early sets him up better for the late game dragon wars. 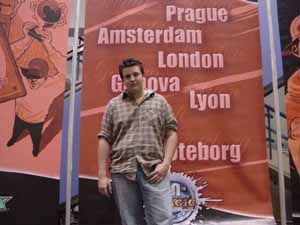 Mario is a 23 year old Law student currently living in Rome. He’s been playing for around 7 years. He broke onto the scene with a top 8 finish in GP Florence. He made 4 Pro Tours that year. Then he had to take a break from the game but came back and played at this year’s Pro Tour Venice.

Pascoli is playing the blue-white control deck that has really come through at this tournament. While similar to Kibler’s (who finished 9th) build his deck is quite different. He has no Akroma, relying on Dragons, Angels and Decrees for the kill. It is really a story of extensive testing paying off as Pascoli has been working on this deck since Euro’s. He thought Goblins would be a bad matchup but faced 7 of those decks an managed to go 6-1. This is mainly through the obvious of seeing the Angel and Silver Knight, but also through some tech cards. Windborn Muse is around in a lot of similar sideboards and is very good for shutting down swarms. The surprise card is Starlight Invoker though. While other decks are running Foothill Guide the Invoker has proved surprisingly effective. It’s a good blocker in the early game an then claws life back hand over foot in the late game. Pascoli reckons it won him 3 games. Against control he has 3 Decree of Silence. Silence plus Stabilizer after boarding really shuts down the RW decks. 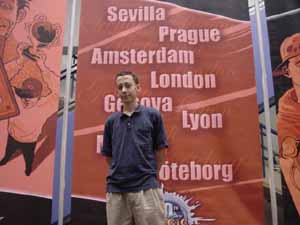 Like De Rosa and Ostravich, current Canadian Champ Rider is another stopover from Worlds who chose to stay around for a couple of weeks before competing in this Grand Prix. Josh is 20, about to go back to school and currently lives just outside Toronto. He’s been playing since Fallen Empires but only really started to get serious and start winning around Urza’s Saga. The last few months have been explosive for him as he took the Canadian title and then finished 22nd at his first Pro Tour – this year’s World Championships. Rider thinks this change came about because he actually took a step back and decided not to take the game as seriously. This meant he wasn’t quite as emotionally involved and it kind of worked out.

Arriving at London Rider had a list for the RW slide deck built by Osyp Lebedowicz and tuned by Joe Crosby. He didn’t have the cards though and so registered a deck and then spent his bye running round in search of what he needed.

Because he was affiliated with CMU Togit and a bunch had already qualified with it he thought it would be a strong choice. Like De Rosa (his deck is virtually identical) he didn’t run into many Goblin decks but he had an excellent record against RW and MWC. This he attributed to topdecking Decree of Annihilation when he needed it.

“I’ve been blessed,” he said, referring to his recent hot streak. Also saying he was going to “milk it for all its worth until it runs out and I go broke.” 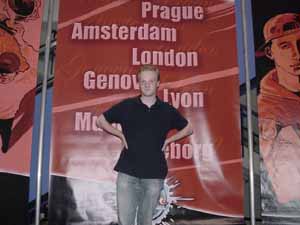 Despite his tender 19 years, Dutchman Frank Karsten has been on the scene for a while. Currently he lives in Eindhoven and is a student of Technology Management. He’s been playing for 6 years and been on the Tour for two and half years. Despite some solid performances his highs are GP top 8 in Cologne and 5th at the Boston Team PT with Jelger Wiegersma and Victor van der Broek. I asked him Dutch Magic had declined a little from the powerhouse it was and he disagreed. Dutch magic was still going strong and despite players like Joost Vollebregt quitting the game there were more coming through like current champion Rogier Maaten and Thijs Wessels (who narrowly missed out on Top 8 at this tournament).

Frank chose to run the popular choice for the tournament: RW Slide. He believes he got the edge in the mirror by running 0 Decree of Justice (too slow) and 2 Decree of Annihilation. The matchup revolves around setting up a good Decree by either using it as an Armageddon to follow a big threat or blow up everything with a creature safely tucked under Slide. Because of the mana commitments Karsten ran 4 Temple of the False God, which were really good. The only thing he’d might change was the 3 Gilded Light in the board that never got used, mainly through not running into the Zombie decks where it is used to counter Head Games. 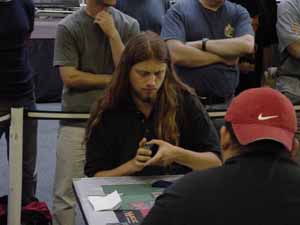 Yann ran the most original deck in the Top 8. He was also the only player in Day 2 running forests. Hamon is a 25 year old French teacher from Rennes, France. He’s been playing for around 7 years and been on and off the Tour since Pro Tour Paris. He fell off for a while, mainly through a lack and practise and indifferent results.

For this format he tested mainly against Goblins and RW and wanted a deck that was good against both of them. The focus of the deck is Silklash Spider. This card is good against both decks. The quirk is the black splash for Cabal Conditioning. Originally this was Decree of Annihilation, but the Spider followed by Decree was too slow. The Conditioning, by emptying the hand, is much stronger. Once a hand is cleared of Wing Shards and other nuisances the way is clear for Silvos to smash. He’s been working on the deck for the last 3 weeks and like Pascoli the high finish has been earned through testing. 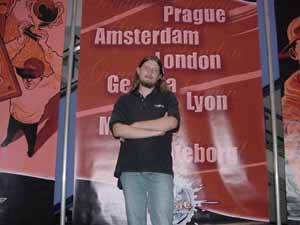 Barbero is one of two Argentinean players to make the Top 8. The 21 year old used to study Law but has since quit to become a full-time Magic player. It seems to have paid off as he has made money in all the tournaments he has played this year, including a Quarter-Final appearance at PT Yokohama and a win in the Amsterdam team GP alongside Carlos Romao and Wilfried Ranque. He has been a frequent visitor to European Grand Prixs and is part of the international conglomerate that seems to have found a home at Amiel Tenenbaum’s house in Paris. Barbero has stayed 2 months in France, going back for the Nationals to test with his usual team of Diego Ostravich, Matias Gabrensa, Gabriel Caligaris and Gabriel Michelena. They test together a lot and this really bore fruit for the 2002 World Championships when Latin America really arrived on the scene.

He chose Goblins as for him he believe it is the best deck. When an opponent’s deck stumbles Goblins really punishes them and with 2 colour decks like RW this will happen a lot. He thinks Mono-White is the worst matchup, mainly because of being able to bring in Windborn Muse. For that reason Barbero has Carbonize in his sideboard. 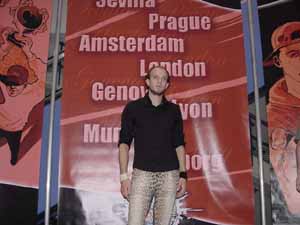 Nitter is the only Pro Tour winner amongst a very strong final 8. The 24 year old Pro Magic player has been on the Tour since LA in ’99. Along with the win in Nice he was also the European Champion back in 2001. Renowned for his extravagant dress sense and party spirit Nitter also find test with other strong Norwegian players like Oyvind Odegaard and Sigurd Eskeland. Although he considers himself a limited player he feel his Constructed has improved a great deal recently.

He chose to run RW slide because he read Oysp’s article and felt it was the right choice. When I asked him what he felt gave him the edge in the mirror he gave a little nonchalant shrug. Maybe it was through waiting for them to make a mistake and capitalizing. 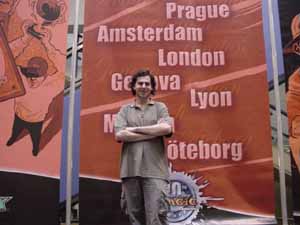 Ostravich is the second of two Argentinean players in the top 8. The 21 year old hails from Buenos Aires and counts himself as a full time Pro player. Last year was relly good for him as he made the Semi’s of Worlds during the Latin America invasion. That money made a great deal of difference as before then he had qualified for Pro Tours but been unable to afford to travel. Now he attends the Pro Tours and also tries to fit in a Grand Prix on route as well. Like Rider and De Rosa he is another player that stayed a little longer after this year’s World Championships. Along with Barbero he stopped at the French/International Magic colony that is Amiel Tenenbaum’s house.

Although Ostravich is more of a control player he chose to play Goblins as he hadn’t tested RW enough to feel confident in the mirror.

With both himself and Barbero in the Top 8 I asked him about the state of Magic in Argentina and South America in general. He explained that really he had to travel to the foreign GP’s as the current local scene didn’t go much higher than the PTQ’s. Although there are good players, as witnessed by Ostravich and Barbero’s success today, there are few Latin Americans on the tour as they have to win something like 4 PTQ’s just to get enough money to travel. The demise of the Latin American Championships (Ostravich finished 2nd at the last one) is also unfortunate as it means the opportunities to play in big events are far fewer.