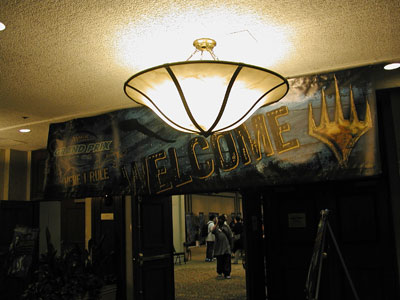 Over 830 players came to battle Saturday morning, but only 128 will rise early Sunday to continue. At the beginning of the weekend we highlighted a number of West Coast players trying to defend their home title as well as a number of rampaging pros who had traveled from abroad to steal it. Leading the standings undefeated headed into the second day of play? Hall of Famer Robert Dougherty! The Your Move Games patriarch burst out to a 9-0 lead with 27 points headed into the second day of play. Joining him at a perfect record was Justin Stanley.

There were a number of big names still nipping at the top tables' heels. Fresh off his National Team Championship at Worlds, Sam Black was sitting solidly in 4th place, with former National Team Member Gabe Walls in 5th. Carlos Romao represented Brazil in 7th, with Luis Scott-Vargas in 10th and Mark Herberholz in 11th.

Which archetypes reigned supreme? Faeries and Death Cloud were the big talk at the beginning of the event, but the top tables were riddled with diversity. Elves was seeing a resurgence, Astral Slide could be seen at the high tables, even Serum Powder in All-In Red! Check back tomorrow to find out who will be the champion of Grand Prix-Los Angeles as well as all the decklists, blog entries, photo essays, and feature matches you can handle!

“I miss the days when I couldn't get a Feature Match Round 2 because I wasn't playing!” Brian Kibler lamented as he sat down to square off against his opponent in the second round of Grand Prix-Los Angeles. Kibler is an old school pro who saw a great deal of success on both the Pro Tour and Master's Series a half decade ago. With a Grand Prix in his home state, he was shaking off the dust to battle again. His opponent for the round was Zachary Gray, a Chicago resident who worked in the pharmaceutical industry.

The two shuffled in silence as Brian's headphones drowned out all exterior noise. Famous for the CD player he used to keep focused in between rounds on the Pro Tour, Brian had made the technology upgrade to an iPod. Zach calmly shuffled, giving no sign he was intimidated by his opponent's professional pedigree.

“I wonder how many of your cards I'm going to have to read?” Brian teased as Zach took a mulligan.