Another work from the same source goes by the title of "Yesterday", and that is exactly where we're heading with this. Yesterday a total of 384 players took part in 12 Grand Prix Trials, the very last chance to secure the highly coveted byes for today's main event. All of the Trials were 32-player flights, single elimination, and awarded three byes to the one player who managed to go undefeated, 5-0.

The format was Rise of the Eldrazi Sealed Deck, the same as is now being played in the Grand Prix itself; thus, not only the perfect training ground for the participants, but for us a terrific opportunity to gather some early insight into the inner workings of the brand-new limited environment. What does a succesful Sealed deck look like? What friends help (a little) with going 5-0? We have the answers right here because, ladies and gentleman, we have a winner! No wait, we have 12 winners!

1 Pelakka Wurm 1 All Is Dust

To while away the time until the real action starts here at Grand Prix Lyon, we now proudly present the top three Rise of the Eldrazi card interactions you have (probably) never heard about. Three tricky rules questions the answers to which every player should know, but as a quick poll today showed, most don't. Yours truly truly didn't know all of these at the start of the day.

#3) Echo Mage With Disaster Radius , Momentous Fall and Others

When you copy one of these spells, the additional cost paid for the original is copied as well. So if, let's say, your opponent casts Disaster Radius , revealing Emrakul, the Aeons Torn to deal 15 damage to all of your creatures, and if you happen to control Echo Mage with two level-up counters, untapped, together with two untapped Island s, you can actually return the favor. Mass carnage.

#2) Valakut Fireboar With Distortion Strike , Virulent Swipe and Others

Switching power and toughness is always sort of tricky. Or is it? Turns out, Magic has a very simple rule to deal with these effects. It doesn't matter if the creature currently is 1/7 or 7/1; Virulent Swipe and Distortion Strike will always boost the 1. Not solely the numbers get exchanged, but really the toughness and power switch places for all regards. Likewise, a well-timed Fleeting Distraction might result in one very unhappy Boar.

Possibly the one interaction that will come up most this weekend is Vendetta on an Umbra-enchanted creature. Now here's the deal: Totem armor is a so-called "replacement effect", and replacement effects actually do take effect during the resolution of a spell. So first Vendetta destroys the creature, which is replaced by the Aura going to the bin. Then Vendetta makes its controller lose life equal to that creature's toughness. That is, the toughness without the bonus the Umbra might have previously granted. An example: Glory Seeker enchanted with Mammoth Umbra . Casting Vendetta on that 5/5 monster will destroy the enchantment at the bargain price of 2 life, not 5.

Thanks to level-five judge Riccardo Tessitori for helping out with this list!

Rise of the Eldrazi is with us in a big way over the next month. Pro Tour: San Juan features both Block Constructed and Booster Draft. Grand Prix: Washington D.C. is all about Standard. Here at Grand Prix: Lyon, it's the chance for Europe's finest to display their Limited skill, with ten Rounds of Sealed Deck action taking us to Draft on Day Two. In our opening show, we get down to business with Bram Snepvangers, closing in on his 600th Pro Tour match in San Juan. Then it's time for tales of Super Friday Night Magic, as we get ready for over 8,000 boosters to be opened. That's a lot of Eldrazi folks.

What it is to be a wily pro in these days of high technology and big prizes (in French, quite literally 'Grand Prix'). Here in Lyon, we really wanted to cover the deck building process with you with a pro player, but were stuck with a knotty problem. In this age of iPhones and wifi, there is little to stop any player from checking out coverage at any time. The last thing we want to do is punish any player for helping us out, by making their decklist public while they are still playing.

Our solution to this tricky problem is simplicity itself. We aren't going to tell you whose deck we are talking about now. All we will say about the player whose deck we are looking at is that he or she is better than the whole coverage team, even Tobi Henke, who beat Kai on the way to winning a GP many moons ago. The Magical Mystery Pro took us through their deck building process, in what was an interesting build. It's amazing what you can do with Photoshop these days

Rise of the Eldrazi is a set with a lot of very powerful cards in, and these powerful cards shape every stage of sealed deck play. When building it is important to try to fit in what power one can, while having answers to the big monsters that opponents might play. When playing, removal must be carefully used on the right targets at the right time. This is not the place where you will often want to play Heat Ray for value early, to get in a little bit more damage.

Magical Mystery Pro opened plenty in the way of power. With a foil rare in the mix, he was faced with the following seven rares from just six boosters. 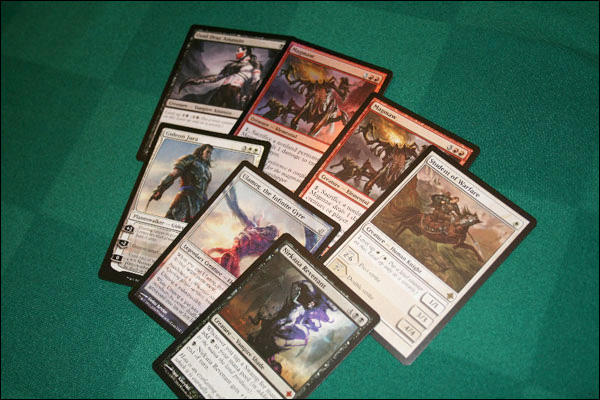 This is how Pros open boosters

Clearly, any one of these rares would be a fine addition to many decks. Gideon Jura is a good answer to just about any monster you would care to mention, while Ulamog, the Infinite Gyre is one of the few creatures resistant to Gideon Jura. Guul Draz Assassin is the bane of leveling decks, picking off members of the team again and again if not dealt with quickly. Building this deck would require discipline.

Looking beyond the rares, some of the gooders at other rarities included a pair of copies of Flame Slash , along with Forked Bolt and Staggershock . Suddenly those Magmaw s looked a lot more likely to make the cut. The main build to come from Magical Mystery Pro leaned heavily on red cards, paired up with black. What? No Gideon Jura? No Ulamog, the Infinite Gyre? Without appropriate acceleration, the big Eldrazi was not something that looked so castable, so he sat on the bench, alongside a rather baffled Gideon Jura . What the black red build has is mana consistency, along with a solid plan for most matchups. With reasonable creatures up the curve, he has a solid game against levelers, and between Traitorous Instinct and Magmaw , there was a cute way of really punishing opposing Eldrazi. A pair of copies of Bloodrite Invoker looked a little easier to get going thanks to Nirkana Revenant , and Perish the Thought was another potential way to take down Eldrazi before they posed a problem. 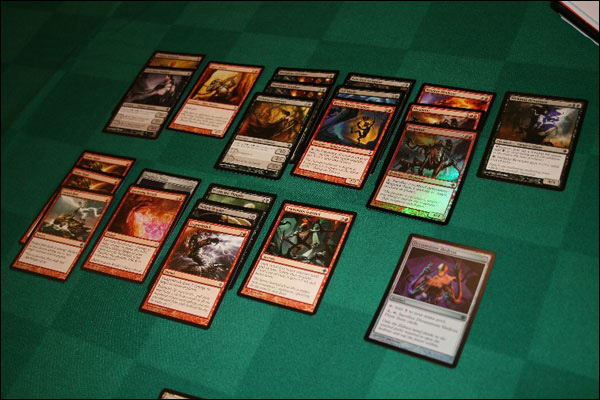 Of course, Gideon Jura couldn't possibly stay unplayed for ever. Build number two takes Gideon Jura on board, along with such hits as Guard Duty and Dawnglare Invoker , making for the build with the best plan against a quick Eldrazi, albeit with very slightly shakier mana. Finally, there was a build splashing red, but keeping on black alongside green. This was the build with the best curve, and the potential to get Ulamog, the Infinite Gyre into play. While the mythic Eldrazi still languished on the sidelines, this build was the first realistic one rejected by Magical Mystery Pro, who liked the curve, but was less than satisfied with the power of the deck in that configuration. 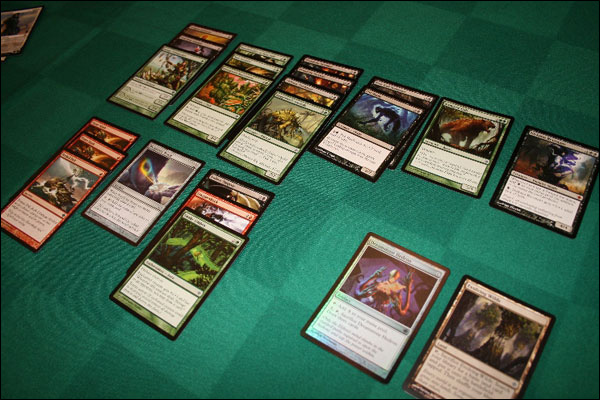 The final question was land. There has been a lot of discussion as to what is the correct number of lands to play in the format. Magical Mystery Pro settled on 17 land, with a Dreamstone Hedron in the mix, and a Prophetic Prism that would mean that on the draw (MMP's preference), hitting land drops shouldn't prove too problematic.

One of the strengths of the Rise of the Eldrazi sealed format is that there are lots of options. This makes it hard to find the right build, but there are plenty of rewards for doing so. Is it right not to be running Gideon Jura in the main if possible? That is a question I don't feel qualified to answer. Our Magical Mystery Pro thinks that in this case it is not. At the end of the day, we shall see.

Maybe no one expects the Spanish Inquisition, however, what pros have already come to expect at these events are the inquiring minds of the coverage. Obviously, no player is happy about the prospect of having the exact contents of his deck spilled all over the internet while the Sealed Deck portion of the tournament is still in progress. But luckily, there's an easy solution to that dilemma. Instead of not telling you a lot about the pool and deck, we simply don't tell you the name of the player. Just assume this mystery pro knows what he's doing.

With that out of the way, here's the full pool: