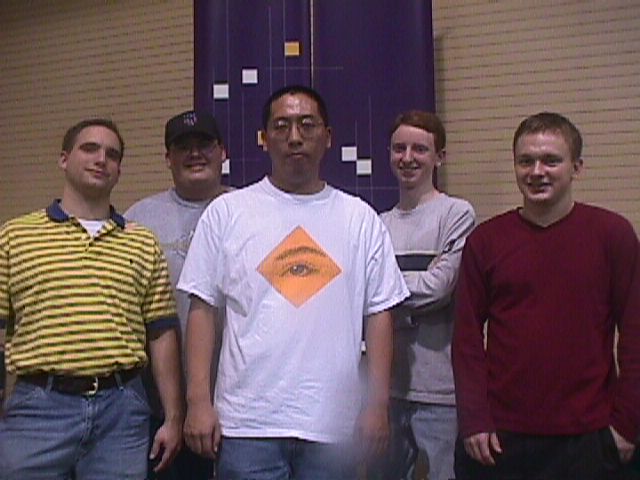 The 7-0's: Lovelace, Froehlich, Chen, Harvey, and SwanThe first day of Grand Prix Atlanta has come and gone, and the Top 64 that emerged will take the field of battle again tomorrow for six rounds of Rochester Draft.

In a twist of fate, no one with a 5-2 record made Day Two. The culprit? Intentional draws. Forty-three players ended the day at 5-1-1 - a large percentage due to round 7 ID's - and forty-one of them get to play tomorrow. The two that didn't are the victims of calcuated risk. Normally players tend to be more confident in these situations and play for Day 2, but Odyssey may be a subtle and tricky enough set that one mistake can doom you, meaning most players would rather take the safe route into Day 2.

Meanwhile, at the top of the standings, five people managed to run the table with perfect 7-0 records. They are Eric Froehlich of Virginia, Brad Swan and Eugene Harvey of Pennsylvania, Chris Lovelace of Tennessee, and Atlanta local Bin Chen. The key to their success seems to be card synergy as opposed to card power, putting the emphasis squarely on deckbuilding rather than the mere opening of so-called "broken" cards. Is Odyssey the most skill-testing set ever for limited? It sure is shaping up that way.

Some of the few that just missed: Zvi Mowshowitz, Eric Taylor, Mike Turian, and Billy Jensen.

Be sure to tune into www.sideboard.com tomorrow for the exciting conclusion to this premier event!