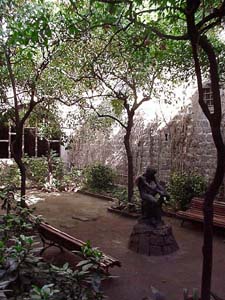 Barcelona's Maritime Museum is a perfect backdrop for another Spanish Grand Prix. Not only does it have a dazzling medieval look on the inside but it's right under the very watchful eye of the huge Christopher Columbus statue. Barcelona is indeed a city of contrasting styles and looks.

Which fits right in with the tournament. This Grand Prix will hand out eight slots for the European Pro Tour (Nice). Since Nice is so close (a few hours drive away) attendance is very high with everyone working hard to play a Pro Tour in their own backyard. Nice and Barcelona also share another important factor: Odyssey Block booster draft.

That's the format of the Pro Tour and also of the second day of this Grand Prix. For the big names present - the Ruel brothers, Pro Tour Champion Farid Meraghni, Frederico Bastos, Patrick Mello, Jelger Wiegersma and a few others - this isn't about qualifying. Their goal is getting some top-notch practice on the second day and maybe cash in a few Pro Tour points. Is white as dead as most people think? How strong is black's allure? Tomorrow we will have two drafts worth of crucial strategy to follow.

But to get to the drafting tables everyone, including the top names, will have to survive eight gruelling rounds today. 701 (in a uncharacteristically American-light field - I only found Andrew Stokinger and Edward Fear in the players' list) will start the day but only 64 will make it. So stick around to follow all the action. We are bound to have some exciting news for you and since Kai Budde isn't here you'll get to see a different face smiling with the trophy in the last photos. Rumour has it that he was bored with winning so often and decided to sit this one out (keep an eye for more details about this).