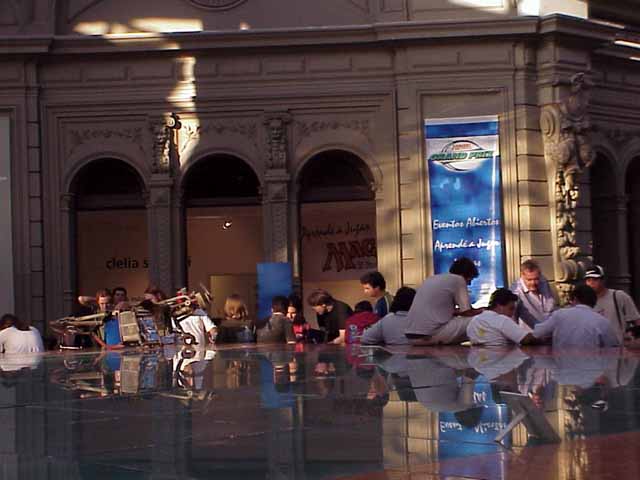 Games transcend language. That's the lesson this weekend's Grand Prix Buenos Aires teaches us. Being held in the majestic Centro Cultural Borges in downtown Buenos Aires; speakers of Spanish, Portuguese and English have gathered to compete for the title of Grand Prix Champion, 8 qualifying spots for PT Tokyo and a cash prize of US$25,000.

With the field preparing for one of the most diverse Extended environments in years, it's anybody's guess as to which the best deck is. While Trix, Tradewind Survival and Replenish have all had recent big tourney success, decks like Hatred, Stasis, Sligh, Turbo Land (with Obliterate!) and Counter Sliver all seem to be viable choices for the biggest tournament in Argentina's history.

Despite the mirrored occurrence of GP Florence, this tourney will not be without its star players. Recent Invitational participant Gerardo Godinez of Mexico is here along with Chilean Raphael Le Saux, the runner up at the 2000 Latin American Championships. There's no shortage of Americans either, with both of New York's OMS brothers, Texans Dave Williams and James Stroud and GP tour de force Alex Shvartsman in attendance.

With as many as 10 countries being represented by an estimated 300-400 players, regardless of who and what proves dominant, the Sideboard will be providing you minute by minute updates. Leave your browser open and keep hitting refresh, and may the best player win.