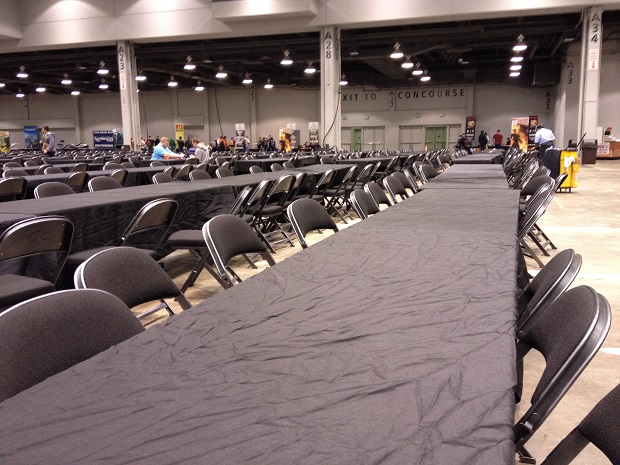 his morning things seemed so new. Spring. Born of the Gods. The first Grand Prix in Cincinnati. A wide world of variations on multiple archetypes. Newness seemed to be in the air.

But then No. 11 Alexander Hayne came along and reminded us that he's actually an alien sent to Earth to dominate Grand Prix tournaments, and no matter how much we think we've moved on, he's going to be there 9-0ing Grand Prix Day 1s.

Playing his trusty Blue-White-based control deck—you know, the one he won Grand Prix Vancouver with just two short months ago—Hayne is joined by Stu Somers, Nick Sefert, Kyle Boggemes, and Jeffrey Pyka among the ranks of the 9-win club. Apparently, if you wanted to go 9-0 on Day 1, as these five demonstrated, you need to avoid playing Red or Green, as Mono Black, Esper, UW and nearly Mono Blue rule the roost after nine rounds.

But 193 players are coming back tomorrow, all trying to push others off their perch and make a run at the Top 8. The undefeated players might be lockstep playing Black, Blue and/or White, but a diverse field stands behind them ready to pounce, including No. 16 Josh McClain, David Ochoa, Brad Nelson, Ari Lax, Eric Froehlich, Pat Cox, Brian Kibler and Luis-Scott Vargas.

Join us tomorrow for six more rounds of Standard and the Top 8 as we try and decide what seven other players will fall to Alexander Hayne as he makes his way toward another Grand Prix victory.

Kidding. Hayne could totally not make Top 8. Maybe. We're not entirely sure it's possible. Either way, tune in tomorrow to find out.

1 Ephara, God of the Polis 4 Master of Waves 2 Bident of Thassa 2 Domestication

1 Chosen by Heliod 1 Ordeal of Purphoros

1 Prophet of Kruphix 1 Reaper of the Wilds 1 Kiora, the Crashing Wave

1 Kraken of the Straits
82 Cards