The Lone Star State is one that values its history. The Texas Revolution. Davy Crocket and the Alamo. The Republic of Texas. The entire run of the TV show Dallas. Brian Kibler 3-0ing Tsuyoshi Ikeda on the back of Punishing Fire.

Brian Kibler has been a star on the southern circuit. Can he add another Texas Top 8 in Dallas after already mastering Houston and Austin in years past?

The history of major Magic events in Texas goes back nearly as far as the game itself, which is a treat for history junkies. Dallas, hosting its third Grand Prix this weekend, was the site of one of the first Pro Tours way back in 1996 when Paul McCabe took down a field of 242 players, including a murderer's row in a Top 8 that sported Brian Hacker, Chris Pikula, George Baxter and Hall of Famer Olle Rade.

Flash forward a few years to 2000 when 312 players met to battle over Invasion Sealed. Invasion marked Phyrexia's last (unsuccessful) attempt to take over another world. Now, more than 10 years later Dallas is hosting one of the last major tournaments before Phyrexia finally gets that long-elusive new home it has been searching for since its Invasion failed.

And while Dallas didn't see another Grand Prix until 2007, it was certainly worth the wait. Reigning U.S Champion Paul Cheon squared off against newly-minted Hall of Famer Raphael Levy in the finals of a 747-man Extended free-for-all, more than twice what Dallas had at its last Grand Prix. In the end, Levy showed why he was in the Hall with a win. 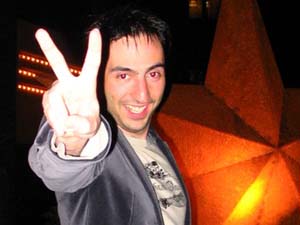 Raphael Levy put an exclamation point on his Hall of Fame Resume with a win at the last Grand Prix held in Dallas/Fort Worth in 2007.

Texas hospitality has also served a few pros well in Houston and Austin as well, as a number of pros either cemented their legacy or broke out in the Lone Star State. Kibler's win at Pro Tour Austin was part of his triumphant return to the tour after taking several years off. But that wasn't Kibler's first trip to the rodeo (yee-haw), as he also finished second at Grand Prix Houston in 2002. Kibler even recently said the decks he played at these Texas tournaments were among the best he's ever played.

Pro Tour Houston, all the way back in 2002, was one of the most dominant performances by a group of playtest partners ever, as Your Move Games dominated a Top 8 filled with some of the best to play the game, including Justin Gary, Jeroen Remie and a whopping three future Hall of Famers in Rob Doughtrey, Darwin Kastle and Bob Maher.

Texas has also ushered in some of today's brightest stars. Grand Prix Austin in 2004 marked some of the first big finishes for several of today's mainstays, including Gerry Thompson's second Grand Prix Top 8 and Michael Jacob's first.

So will the stars come out in Texas or will a new name make a big splash in the Standard format? Who will make their mark on Magic history and battle through the field of 1,189? Tune in here all weekend to find out.

Don't forget, Grand Prix tournaments are filled with TONS of things to do besides, of course, playing in an awesome Grand Prix. Here are the TEN Last Chance Grand Prix Trial winners from Friday. They managed to pick up the last few byes available for the event and get to sleep in this morning firm in the knowledge they're already undefeated through the first three rounds of competition.

4 Koth of the Hammer 2 Chandra Nalaar

20 Mountain 2 Sphere of the Suns 3 Mark of Mutiny

Every tournament dealers have their finger on the pulse of the metagame, often tipping off the hot tech by selling out of certain cards or scrambling to find copies of the next unexpected gem. The dealers on the floor in Dallas have seen demand spike on a number of key cards that are sure to define the weekend.

At the top of everyone's list is Inquisition of Kozilek, a sort of Thoughtseize-light that has been quietly picking up steam as players realize the restriction on Inquisition of taking a spell with converted mana cost three or less doesn't make the spell any less useful. Sales have been so brisk the uncommon is fetching a premium usually reserved for Bloodbraid Elf and Path to Exile. One dealer even said his goal was to buy as many Inquisitions as he could, and that selling them was a bonus.

A number of other commons and uncommons have also been in high demand. Oust, Tumble Magnet, Mark of Mutiny and Mortarpod have been finding their ways from dealer tables to decks, and Magic 2011 common Squadron Hawk has been moving quickly, likely sold in groups of four. With the exception of Mark of Mutiny, all of those are key components in the many variations of CawBlade decks, which is likely to be a popular choice this weekend.

But the big mover – in every sense of the word – has been Inferno Titan, which has been adapted as a three- or four-of in anything from Lotus Cobra-based RUG decks to Boros sideboards. While each of the Titans has taken a turn laying claim to being the best Titan in standard, Inferno has long been a strong second or third on that list. With its ability to slay three-fourths of a Squadron or to outright kill a Jace, the Mind Sculptor, this could be the weekend the angriest of Titans takes its place at the top.

The metagame here in Dallas is incredibly diverse this weekend. You're likely to see any number of decks among the some one-thousand plus players in attendance. The format seems to have room for anything right now, from control, to aggro, to even combo decks, so no matter what your spell-slinging preference is, the current format has something for you! Here are a few of our top contenders:


If you were surveying the room last night you would have more than likely seen this deck tearing up a few tables, not only in the super FNM but also at the testing tables. This is bar none the number one deck in the format presently that debuted at Pro Tour Paris. The plan is simple: stick an evasive 1/1 creature in the form of a Squadron Hawk and equip one sword or another to it (more often than not a Sword of Feast and Famine). This simple yet elegant plan allows the Squadron Hawk's owner to spend his mana before combat, attack, and then untap, only to spend his mana again post combat. Often times this plan includes a number of Planeswalkers greater than zero which can often be enough to win the game on their own.


Clearly the second most popular deck in the room and considered a combo deck by some, Valakut has held it's own in Standard for quite some time. Thought by many to be the bogeyman for a time, it's certainly taken a back seat to the avian threat of Caw-Blade. Make no mistake though, the deck still definitely has teeth and if you're unprepared for it, it can have a significant advantage in the unique angle it attacks from: its very lands fetched up by the combination of Primeval Titan and Green Sun's Zenith!


RUG, a simple name representing the red, blue, and green cards the deck plays is also a solid contender here today. The deck is considering by some to be the most powerful deck in Standard that very few are playing. Its goal is to play a Lotus Cobra or an Explore on turn two, and ramp into Jace, the Mind Sculptor, Inferno Titan, or the oft neglected Precursor Golem – a card which shines in a field full of Go for the Throat.