1 Sword of Feast and Famine 1 Batterskull

As I'm sure we've drilled into you a million times by now, one of the most defining characteristics of Legacy is the sheer number of decks that are not only in existence in the card pool, but completely viable. In the past, it was a common occurrence to see seven or eight distinct deck archetypes in the Top 8 of the event. Because of that, this seems like a great time to provide our readers with a series of snapshots of what is doing well here at Grand Prix Indianapolis. We'll be looking at the top ten tables, and giving you a quick glance at the decks resting nicely atop the standings. So here's the view from the top ten tables for Round 3: 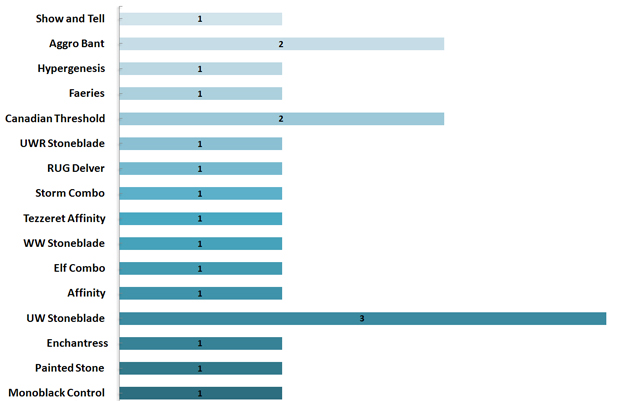 As expected, there are a lot of decks represented at the top tables. Continue to check in as the rounds of play continue to put these decks to the test. At some point, the cream will rise to the top, but at this point, there's no telling what that will be.

Preparing for a Legacy event is no easy task. I've been covering Legacy Grand Prix for the past few years, and it never ceases to amaze me. At its very base, you have a core of decks that have been around forever, decks like Storm, Bant, Goblins, Merfolk...the list really does go on and one. Then, as decks have risen to dominance in the more contemporary formats, such as Standard or Extended, players have been eager to see how they can adapt them to the Legacy environment. This has added such powerhouses as Stoneblade, Faeries, and Affinity to the mix. And then you get the brewers who eagerly anticipate the release of new sets, waiting to see what cards they can either mix into the plethora of existing decks or build an entire deck around. Most recently, this has included cards like Emrakul, the Aeons Torn, Kuldotha Forgemaster, and Delver of Secrets. In any case, navigating the winding passages of Legacy can be very difficult without a map, so consider this a brief primer to help keep you from getting too lost.

One of the best ways to describe the appeal of Legacy is that it allows spectators to see how really cool some cards can be. Often, very cool cards will slip through the cracks because the time and environment simply aren't right. At some point in the future, though, these cards are given a life of their own in another format where they can really shine. Often that format is Legacy, and often those decks are combo decks. The sheer variety of different combo decks available in the format is one of the true hallmarks of Legacy. First up to examine is one of the creature-based combo decks in the format: Elves.

This deck is a derivative of the Elves Combo deck archetype that Luis Scott-Vargas used to dominate the Extended Pro Tour in Berlin in 2008. Here's a sample list:

So at first glance, it's hard to look at a deck containing this many creatures and immediately identify it as a combo deck. I mean, you play creatures, you overwhelm your opponent, you win, right?

While that is ultimately one of the main ways that this deck goes about its business, it's execution of this plan that really exemplifies the combo nature of it. Elves runs with a couple of different engines that work together to provide all the resources its pilot needs to win. The first is the mana engine created by Heritage Druid and Nettle Sentinel. If you manage to get three Sentinels and a Heritage Druid into play, every green spell you play nets you three mana. A large amount of mana can also be generated with Priest of Titania, Quirion Ranger, and Wirewood Symbiote. Returning the Ranger with a Symbiote resets the "once per turn" clause on the Ranger, allowing for a large amount of mana to be made for minimal effort. When you add that to the card drawing capabilities of Glimpse of Nature, Regal Force, and Elvish Visionary, it's really easy to simply snowball into more cards and more mana than you can imagine. Once you have all of that mana, you can use a Summoner's Pact to fetch your Emrakul, the Aeons Torn, which you can cast, taking the extra turn needed to kill your opponent.

Another vein of combo decks viable in Legacy are the graveyard-based ones. Here are a couple of examples:

4 Brainstorm 3 Daze 4 Entomb 4 Force of Will

1 Angel of Despair 1 Sphinx of the Steel Wind

The graveyard is a resource that is back in vogue in Standard nowadays thanks to the return of flashback, but it has always been a major player in Legacy. The first deck shown above uses a powerful suite of methods to put its creatures in the graveyard in combination with a slew of cheap ways to get them back into play. I can tell you from first-hand experience that Jin-Gitaxias, shall we say, limits your options? Each of the creatures in the deck has a specific purpose, and the deck does an exceptional job of searching for the exact one required and making sure that it gets into play as soon as possible.

Dredge, on the other hand, relies on a combination of cards to build an army rather than just swining for the fences. A graveyard filled with copies of Bridge from Below, powered by Breakthrough and a bevy of dredge creatures, takes advantage of the flashback on Dread Return to build an army of Zombies, all while using the Return to bring a Flame-Kin Zealot back from the dead, turning the Zombies into Zoombies and finishing the game in one fell swoop. Because of their immense power and the relative ease of disrupting them (just remove the graveyard), these decks have been in and out of play in the format as the metagame shifts around them. New cards like Grafdigger's Cage put yet another kink into the works for them, but there are always the brave souls willing to sleeve them up and show off a bit of their necromantic side.

I'm going to round this up with a quick tour of what I refer to as the "pure" combo decks. These decks are the essence of combo. They pick a pair or trio of cards that have a dominating interaction, and they design an entire deck to make sure that they get into play as soon as possible. Here are a few samples: