While I'm busy typing up decklists, the tournament continues on steadily. During the first round of today, two of the four undefeated players met in the feature match area, Japan's Shouta Yasooka and Joshua Yang from Singapore.

Yang took Game 1 quickly with his explosive Mythic Bant deck, killing Yasooka while he was stuck on three lands. Yasooka mulliganed Game 2, but killed all of Yang's threats with back to back Deathmarks and Maelstrom Pulses to clear the way for his Putrid Leech. Game 3, Yasooka mulliganed again, but Deathmark'd his way back into the game, ramping up to Siege-Gang to force enough damage past Yang's creatures.

Yang and Yasooka battle for the early birds.

You should all know who Yuuya Watanabe is by now, Rookie of the Year 2007, Player of the Year 2009, that kind of thing, but you probably don't know Raffy Sarto. Raffy usually judges at most Asian Grand Prix events, but somehow, he's won Grand Prix trials for the last two and has been actually slinging spells. He made day two at Grand Prix Bangkok last year, and is loitering near the top of the standings again here this weekend.

Watanabe took Game 1 with a Day of Judgment, sweeping Sarto's small Red and White creatures aside and making way for Elspeth and Celestial Colonnade to finish Sarto off. He couldn't maintain control in Game 2 however, as Sarto overran his defenses, kicking a Burst Lightning to take the match to the third game, where Watanabe was ill-equipped to deal with Sarto's Hell's Thunder. 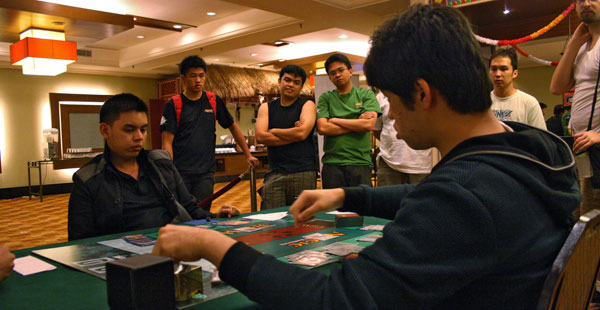 Sarto asks questions, does Watanabe have the answers?

During round three yesterday, Brian Kowal was begged by a neighboring player for one of the Mark Herberholz pro player cards he was using for Soldier tokens. Unsure of why anyone would want one so badly, Kowal handed over the card with a shrug. From there, Kowal's luck turned south, and he was soon out of contention for day two. The lucky recipient of the card, Qian Jie Seow from Malaysia - who was 2-1 at the time - then rattled off five straight wins to comfortably make it through the cut to the second day. His opponent - Jason Yap - is well known local player, often seen competing in or near the top 8 of the Malaysian National Champs.

Seow lead with an Expedition Map, while Yap had a Wild Nacatl, which ran in for 2 on the following turn with the help of a Terramorphic Expanse. Seow had to crack his Map to find a Forest, allowing him to summon a Borderland Ranger. Noble Hierarch beefed up the Nacatl, which attacked past the Ranger, and a Stoneforge Mystic tutor'd up a Behemoth Sledge. Seow could only get an extra land drop out of an Explore on his turn. He was missing the Valakut, the Molten Pinnacle his deck was built around, something he would probably need to stop Yap's marauding hordes. Lightning Bolt killed the Hierarch, but Yap summoned a Knight of the Reliquary and put the Behemoth Sledge into play. A Siege-Gang Commander from Seow wasn't enough to stop Yap's Behemoth Sledge from taking Game 1. 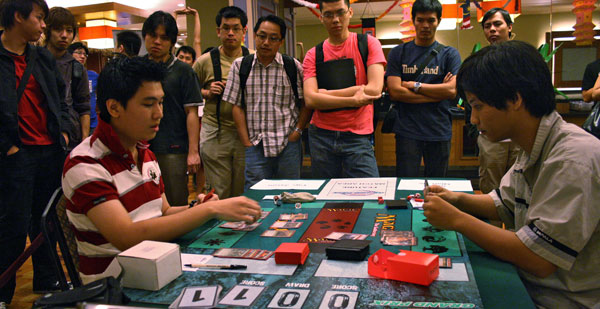 Yap tramples all over Seow, while Tomoharu Saito apparently stares me down for not giving his a feature match yet this weekend.

Seow threw away his opener in Game 2, while Yap reluctantly kept his. Seow had another turn one Expedition Map, while Yap had a Terramorphic Expanse, fetching a Plains, and then summoning a Stoneforge Mystic for Behemoth Sledge. Seow smoothed out his mana with Naya Panorama, while Yap summoned a 4/4 Knight of the Reliquary. Two Lightning Bolts took down the Knight, before Seow summoned a Bloodbraid Elf, cascading into a Naturalize. Seow could only shake his head and send it to the bottom while Yap's Sledge relaxed in his hand, sipping cocktails by the pool. Oblivion Ring from Yap took out the Map while Seow's mana was tapped, and a Dauntless Escort saved the Mystic from a Lightning Bolt. The Mystic strode into battle with the Sledge, and was soon joined by a Baneslayer Angel and a Stirring Wildwood. Seow emptied his hand to deal with the Angel, but couldn't stop the multitude of damage left on Yap's side of the table. Perhaps that Mark Herberholz card isn't so lucky after all.

As always, there's much more to a Grand Prix than just the main event. Here are a few photos from around the site that haven't otherwise made it into the coverage so far. 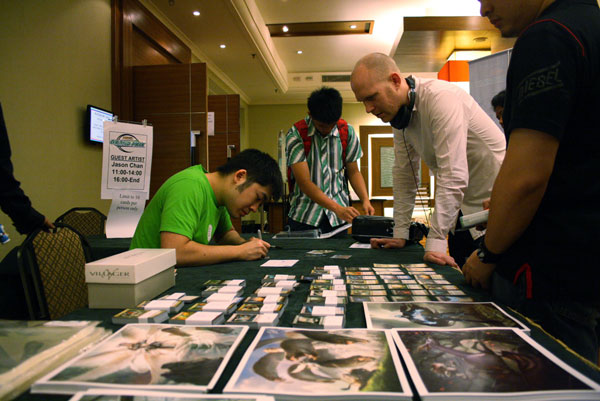 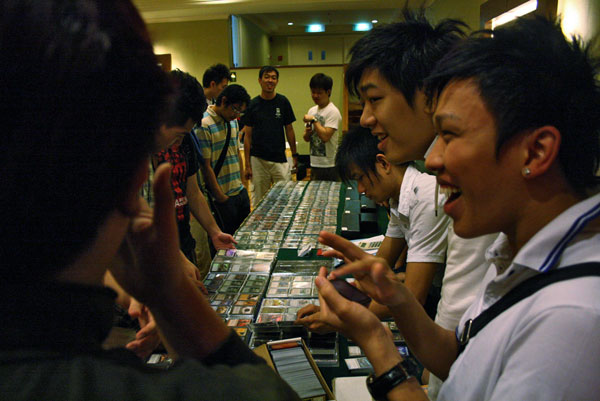 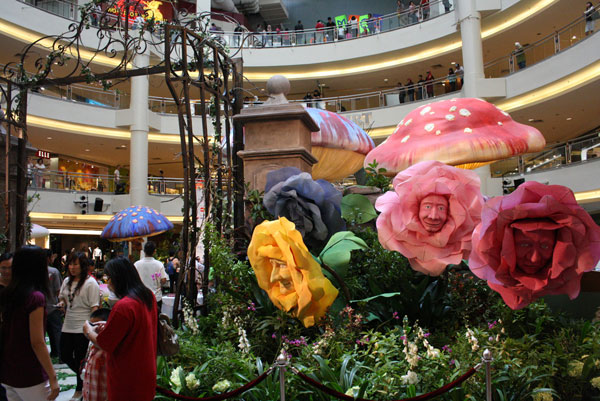 The huge promotional Alice in Wonderland display inside the Mall attached to the venue. 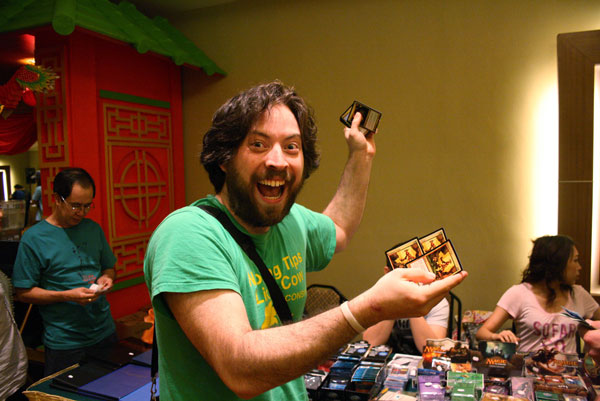 I was alarmed earlier today, to hear squealing noises coming from near the dealers tables. It turns out Alex West had been cracking Alara Reborn packs in search of Colossal Mights and emitting loud noises every time he would find one. When asked what they were for, both he and Brian Kowal declined to reveal their Top Secret secrets (obviously some kind of Zoo build for GP Yokohama next weekend). They abandoned the idea half an hour later, but were up a Maelstrom Pulse, at least. 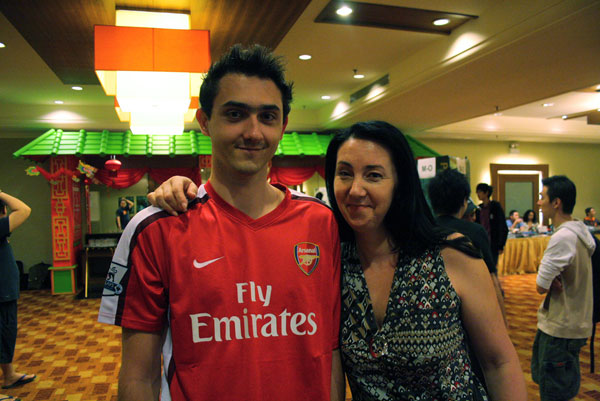 While Martin Juza didn't make day two this weekend, that just gave him for time to spend with his Mother. “GP KL was great. Maybe I didn't make day two, but being able to give my Mom a birthday gift like this is worth much more than winning a GP.” That reminds me, I should call my Mother... 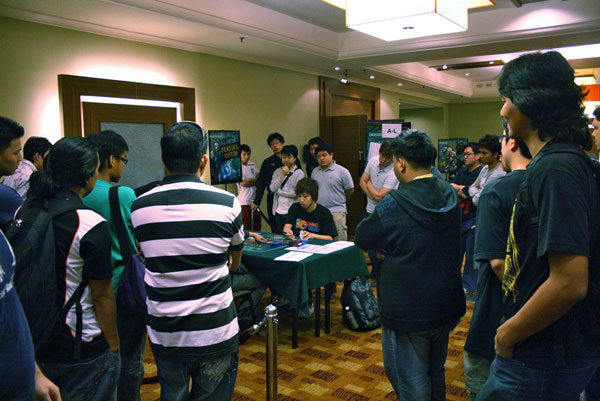 Crowds gather to watch Player of the Year Tomoharu Saito battle in the feature match area.

Martin Juza had a plan this weekend, a White/Blue counterless control deck he got from fellow Czech Republican, Michal Hebky. It didn't work out too well for him, but both Brian Kibler and Sam Black are floating near the top 16 with this spicy build. As you can see, I wasn't kidding about Black looking for Fieldmist Borderposts and Divinations yesterday.

Sam Black has been loving the X-Spells this weekend.

Another deck that caught my eye was played by Hiroaki Yamakawa from Japan. His day two record is not stellar, but his deck sure is interesting!