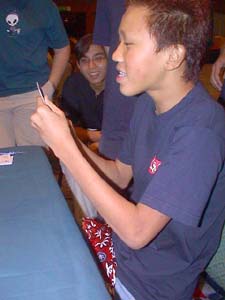 It's only fitting that a Singapore-dominated Grand Prix should have an all-Singapore finals. On one side sat Ding Yuan Akuma Leong, grinning, confident, ready to fight. On the other, Chang Chua, quiet, modest, and well aware that he was doomed to lose. His blue-white control deck is excellent, but has few ways to stop key cards like Chainflinger, Cabal Torturer and Bomb Squad. Plus, he's on the receiving end of a quick beatdown. Before the match he prayed for mulligans on Leong's part.

Chua started with Skywing Aven, but was already under fire Barbarian Outcast. Next Leong made a Chainflinger, and Chua's face fell. Cephalid Sage earned a Sonic Seizure so Leong could swing for four. Aven Cloudchaser met with Firebolt, and Chua took four more.

Nothing seemed to stick on Chua's side. Mystic Familiar fell to Afflict and Chainflinger. Finally Hydromorph Gull showed up to keep the peace. Leong didn't mind, he had Chua quite low already. He made an Ember Beast and waited. Chua made a Hydromorph Guardian.

Leong made his move. With six land on board Leong flashed back the Firebolt on the Gull. Chua rescued with the Guardian. The incoming attackers reduced him to five. He had Second Thoughts for the next bout, but it still left him at three. Leong was at nine. His Gull couldn't race in time. He had Ghostly Wings to buy time from the Chainflinger. Leong calmly topdecked Flame Burst, ending it abruptly.

Then it seemed Chua's dreams were coming true. Amidst much mumbling of curses he smiled as Leong mulliganed, then mulliganed again. Perhaps victory was within his grasp?

Leong's early Torturer was Syncopated, and soon Chua was swinging for two with a Pilgrim of Justice and Ghostly Wings. Leong found a fourth land and made a Bomb Squad, then a Chainflinger. Chua continued to serve. He even made a Gull just to hit for three before the Squad blew it up. 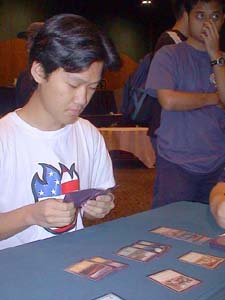 It looked like Leong was too far behind. But then he drew Morbid Hunger! Tapping six triumphantly, his celebration was cut short by Syncopate. Teroh's Faithful hit play for Chua, and a Shelter made sure they and the Pilgrim would get past Leong's defenders unmolested.

It all came down to this. Leong had no early pressure, but Chua couldn't smile. He had just three lands: two islands and Cephalid Coliseum. Leong got a Torturer, then Ember Beast, while Chua just sat behind his Phantom Whelp.

He missed another land drop, and carelessly played Skywing Aven. Realizing his error, he scooped up his cards in frustration. Leong turned over a hand of brutality to show him that the error was inconsequential. Leong was winning this tournament.