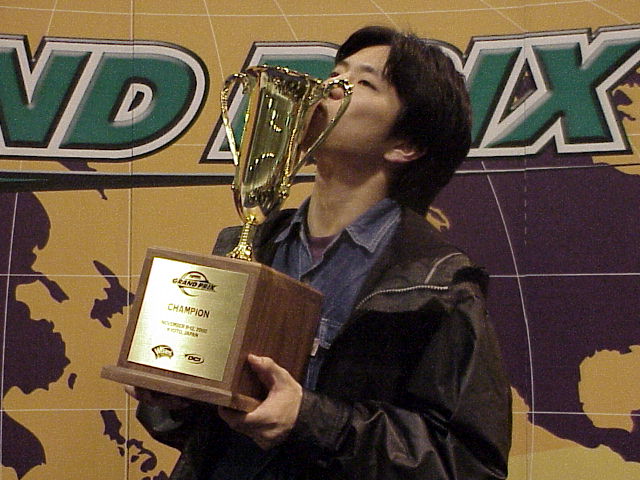 The Grand Prix Kyoto finals set relative unknown Yuki Murakami, with no international titles to his name against local favorite Tsuyoshi Fujita who finished 26th at Worlds 1999 and has been in the top 8 Grand Prix events before. Due to the early start time for the final match and the news that a Kyoto native was playing the finals, there were large crowds gathered to watch the contest.

To add to the excitement, a local television crew had set up a giant train track around the table so they could move their large television camera around to get different angles. Another television camera was moved around on a tripod and several press photographers were on hand taking pictures of the match. The Grand Prix Kyoto finals had the feel of a Pro Tour top 8!

Both players are playing NecroDonate, which attempts to get an early Necropotence out to draw lots of cards and then plays Illusions of Grandeur to gain 20 life. With those extra life the player draws even more cards off the Necropotence and then casts Donate to give his opponent the Illusions of Grandeur. Once the opponent can no longer pay the cumulative upkeep, the Illusions goes away and the opponent loses 20 life. In the mirror match-up, the key is to be the first person to get Necropotence out, as the card advantage cannot be beaten.

Fujita opened with two Demonic Consultations, two Gemstone Mine, Peat Bog, Mox Diamond and City of Brass. Necropotence, or a way to get it, and the ability to cast it early, makes any hand a keeper. Murakami Duressed one of the Consults after Fujita laid a Peat Bog and Mox Diamond, but Fujita simply used the other one and attempted to cast turn two Necropotence. To Fujita's dismay, Murakami used a non-standard main deck Annul to counter the Necropotence and then dropped a Necropotence of his own and drew seven additional cards.

Fujita had run out of active spells so he was forced to sit there as Murakami Unmasked him, drew four more cards, Duressed him, and then cast Illusions. Once the Illusions was in play, Murakami revealed his hand to Fujita to show that he had the Donate and several counterspells. Fujita refused to concede but after Murakami drew nine additional cards and began discarding counterspells, Fujita decided to move on to game two.

Fujita opened with three Swamp, Gemstone Mine, Mox Diamond, Pyroblast and Vampiric Tutor. While not a particularly strong hand, it gave him the option to Vampiric Tutor for and cast a turn three Necropotence while protecting it with a Pyroblast. This is exactly what Fujita chose to do using the Mox Diamond on turn three as bait for any Annuls. Murakami looked to be in trouble when he was forced to discard a Hydroblast in order to cast Force of Will targeting the Necropotence. Fujita Pyroblasted the Force of Will but Murakami calmly used a second Hydroblast to counter the Pyroblast.

Disappointed, Fujita ended his turn and Murakami Vampiric Tutored for Necropotence and played it on his turn. After Unmasking a second Necropotence from Fujita's hand, he drew eight additional cards and took over the game. Fujita could do nothing but hold his head in despair is was apparent that he had no chance of winning this unless Murakami made some horrible mistake.

Murakami's strategy for sideboarding in the mirror match-up was apparently to remove all the parts of the combination and sideboard in four Negators to beat down. As he was running low on life and hadn't drawn a Negator, he was forced to Consult for one. This proved his undoing as after revealing just three of the top six cards in his library he sees all the remaining Negators in his deck (after Consulting early in the game) and Fujita becomes very animated as Murakami is forced to concede.

Fujita's opening hand of Annul, Donate, two Mox Diamonds, Force of Will and two Swamps doesn't contain many threats but today is Fujita's day as his first three draws are Peat Bog, Duress and Necropotence. Unlike games one and two, Murakami is the first to attempt to cast Necropotence after having once Duressed away on turn two. Fujita had the Annul and played his own Necropotence on turn three to draw 10 extra cards. Murakami has a *third* Necropotence but it's already too late as it got Annulled as well.

Using City of Traitors, Fujita cast a fourth turn Illusions of Grandeur and drew 26 additional cards. This left him vulnerable to Wasteland as he only had Swamp, City of Traitors and Mox Diamond in play as the other Mox Diamond had been Annulled on the first turn. But NecroDonate decks rarely pack a Wasteland so in an ironic turnabout, Fujita revealed his hand of six counterspells and a Donate to Murakami who began laughing and then conceded.

The crowd broke out into cheers and his friends mobbed Fujita, as he became the Grand Prix Kyoto Champion!