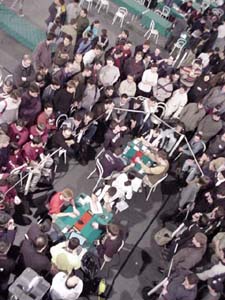 In the end the lesson is: history does repeat itself. The season started with Donate ruling the Extended environment and even Bob Maher giving up on his beloved Oath. Its time had passed, everyone agreed.

Three months later, two German players battle in the finals of the last European Grand Prix of the season with two identical Oath decks. The only constant during this period was Kai Budde's incredible results. He won Pro Tour New Orleans and won the last tournament of the season, this one, against his good friend Patrick Mello.

It was a Portuguese Grand Prix like all the others ones. A staggering 670 players showed up and battled in a very tough first day with eight rounds that still saw players with very good results not make the second day with eighteen points not guaranteeing a second day presence.

The finals were a grueling three-hour Oath mirror-match that got boring to such an extent they decided to settle the third game by taking out all cards that could stall the game and mulligan down to zero.

Sure enough they managed to drag that one out for a long time as well. But things got to a point the crowd actually wanted Patrick to find a way to survive the last attacks. They were making the game as funny as possible for the few lost souls who decided to stick it out.

Above all, it was a great Grand Prix to close a very exciting Extended season. The way players reacted to the final match showed how much we could laugh with this game. And it added another memorable moment to the way we see Magic. Or more simply, in Gary Wise's words: "The Grand Prix that never ended..."