Grand Prix Minneapolis will go down as one of the smoothest events in the history of competitive Magic. After a rough start, the remainder of the season's final Invasion Block Constructed tournament went of without a hitch. 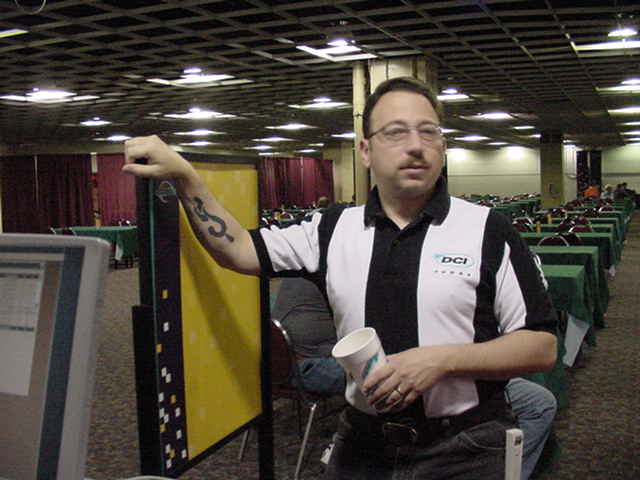 An administrative problem led to the event to start a bit late, but that was the end of the difficulties. The crowd of 410 players played through 13 rounds without a single disqualification or major incident. The players were extremely well-behaved, polite, and sportsmanlike.

Invasion Block Constructed is a well-played format, so there were a minimum of difficult rulings questions. The majority of Judge calls involved player interaction. The single greatest problem was poor communication between players. Too often, we found players who disagreed with what Phase or Step they were in, or the passing of priority was unclear.

Here are a few other rulings that came up during the event:

Player A attacked with a Blurred Mongoose and Penumbra Bobcat. Player B blocked the Mongoose with a Goblin Legionnaire. They agreed to put the damage on the stack. Then Player A said "you take 2 damage." Both players recorded the life total change. Then Player B wanted to sacrifice the blocking Legionnaire to kill the Bobcat.

Ruling: The Floor Judge ruled that it was too late, since both players had recorded life totals, implicitly resolving the stacked damage. The Legionnaire died as a State-Based Effect before Player B had the opportunity to play the ability. Player B appealed; I upheld his ruling.

We discovered a player with a Snow-Covered Mountain in his deck. The ruling on this comes directly from the Penalty Guidelines: Procedural Error-Minor. We Cautioned the player and had him put in a normal Mountain.

A more interesting moment came during a deck check. A player had "Aura Explosion" listed on his decklist; we assumed that he meant "Aura Blast." When we investigated, we found that the player, who is a native Spanish-speaker, had the Spanish version of the card in his deck-which was entitled "Explosion de Aura." We informed the player that he should always use the English wording on his decklist, but assessed no penalty.

A more detailed report on the rulings and philosophy behind them will be available soon on the DCI Judge Page.

TO Steve Port put together an outstanding show. Everything the Judging and Event Staff needed was available at a moment's notice. From top to bottom, it was an example of exactly how to run a large-scale Premier Event. It is easy to say Grand Prix Minneapolis was a successful event.