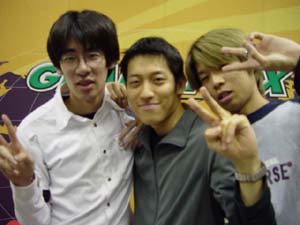 Things are not looking good for S.S.D. Their opponents, Masashiro Kuroda, Katsuhiro "Lightning" Mori, and Masahiko Morita have outstanding decks. Meanwhile Shuuhei Nakamura has a great deck, Kimio Imai has a passable deck, and Naoki Kabouchi has something that barely masquerades as a deck. It would be an uphill battle.

The tone of the finals was set early by Morita. He blazed out with Beloved Chaplain, Narcissism and Teroh's Faithful while Imai's Dwarven Recruiter and Krosan Archer looked on. Then came Rabid Elephant. Imai looked like he wanted to pack it in right there. He mustered his courage and tried to find a winning play.

At the other end Kuroda had a mittful of removal, but only three lands to work with. His Organ Grinder got stopped by Kabouchi's Magma Vein, and then it was just Rotting Giant and Nantuko Calmer staring at each other. While Kuroda waited to draw more lands, Kabouchi found an island.

Mori was under a lot of pressure from Nakamura's army of small creatures. Strength of Lunacy made a Patrol Hound particularly menacing. Mori kept his life total high while he looked for a solution, but he seemed outgunned.

The combination of Rabid Elephant, Beloved Chaplain and Narcissism was just too much for Imai. Morita didn't have to play another spell, he was too busy savaging Imai's blockers and life total. Mori could sympathize with Imai's plight. Nothing he could do could contain Nakamura's forces. He succumbed.

Kuroda had meanwhile drawn up to six land, while Kabouchi had had the misfortune of seeing nine. He had an Aquamoeba with Ghostly Wings holding Kuroda's Soul Scourge at bay, but couldn't mount an offence. Kuroda's hand of removal came to fruition, and Zombie Assassin took out the offending Aquamoeba. From there it was a short road to victory.

Morita's second game had stalemated, thanks mostly to the eleven land he drew. He had a Floating Shield on a Confessor to keep back a Rabid Elephant, and plenty of other good defenders, but nothing that could fight back. Meanwhile Mori was in trouble again in the second game. Nakamura had Grotesque Hybrid that was giving him fits.

Of course, waiting favors the deck with two Overruns. After negating a well-executed assault from Imai with Equal Treatment, Morita plucked one of his game-winners. He tossed it into the center of the table, and Imai sagged in his chair.

Kuroda's hand for the second game was a little awkward: Mesmeric Fiend, Rotting Giant and five land. He kept, and the Fiend stranded Repel over Cephalid Broker and Magma Vein. Kuroda drew two more land, and his Rotting Giant just sat there. Kabouchi drew into his fourth land and thought hard. He made a Broker and passed it back.

Mori and Nakamura were in a holding pattern, but Mori had effectively locked himself under his own Chamber of Manipulation. His decision to keep Animal Boneyard out of the deck (he was already running Patron Wizard and Overrun!) seemed to mock him. He had fewer cards in his library, and hoped against hope that there was something that could jump out and save him.

While Kabouchi Brokered his way through his deck, Kuroda found a Chainflinger and started working his life total. He also got a Dirty Wererat to answer Rabid Elephant. Metamorphic Wurm, however, would be more trouble. Kabouchi turned it up to "unrecoverable" with Seton's Desire. Conveniently, he was at threshold.

It ran in, and Kuroda shoved all his creatures in front of it, making sure his Rotting Giant could play by casting Waste Away on the Rabid Elephant. The last point was dealt by the Chainflinger. The beast was gone, but Kuroda had nothing left on the table.

Kabouchi's Broker went wild, and while Kuroda found a Famished Ghoul and Barbarian Outcast, Kabouchi dug to his eighth land and played Petradon. Kuroda's Zombie Assassin showed up only to be Repelled, and they were on to Game 3.

Meanwhile, the inevitable had happened to Mori. He was contributing nothing to the table and Nakamura was building a professional army. He scooped.

All eyes were on Kuroda and Kabouchi. Kuroda turned up a great seven for the deciding game. Kabouchi winced, but kept his seven. Mesmeric Fiend revealed his uncertainty. He had four land, Cephalid Broker, Treetop Sentinel and Rites of Spring. Kuroda, holding Flame Burst, didn't hesitate to take the Rites, preventing Kabouchi from thinning his deck and finding his second island. 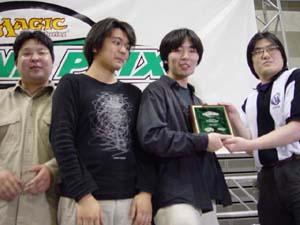 Reckless Charge let the Fiend to extra damage, and a newly-drawn Flame Burst stopped Puppeteer, saving the original for the Broker in the wings. Kabouchi got a Halberdier to stop the Fiend. Kuroda missed his fifth land drop, stopping Soul Scourge from taking to the air. He passed it back.

Kabouchi let out a huge sigh of relief. He tried his Broker. It was Bursted. Kuroda slammed the top card of his deck down on the table: Swamp. Zombie Assassin joined the party. Kabouchi had no play. Soul Scourge visibly frustrated him.

Now Kabouchi was knocking. No island came. Nantuko Calmer was unimpressive. Kuroda didn't have a second mountain to go with his Liquid Fire, but he did have Waste Away at the ready, and his Scourge had brought Kabouchi to eight. Kabuchi swung with both his creatures and lost them to the Assassin, bringing Kuroda to eleven. He had no follow up.

Kuroda hit back for four. The entire crowd held their breath. Kabouchi's eight land spoke of endless possiblities. What would he draw?

Metamorphic Wurm. Waste Away swept it off the table and Kuroda's team ran back in. Kabouchi didn't even bother to play coy. As he extended the hand, Kuroda was beset by Morita, Mori and even Tsuyoshi Fujita. Everyone was cheering. After so long, they finally had a Grand Prix Title.