Are you the type to arrive at events early? Show up with enough time to get a "feel" for the venue? Do you like to have your clothes laid out the night before? If so, you're rewarded on Grand Prix Friday nights. And if you're not that type, it's worth it to become the type. In addition to pre-registration, saving that precious sleep in the morning, Magic events run deep into the night, warming you up for the ensuing Grand-Prix onslaught, and winning you some cool stuff in the process. Here at Grand Prix—Nashville, Friday night was bumping. Complete with drafts, FNM, Win-a-Box battles, EDH tournaments (with winners awarded free entry to another EDH event in addition to packs – feeding the pubic event's "Endless EDH Weekend"), and of course, grinders.

Bummin' because you're a few ratings points shy of Grand Prix byes? Grinders are your last chance to secure an easy Saturday morning. Beat your opponents to a pulp and start your Saturday with a 3-0 record. There were fourteen grinders run last night with fourteen lucky individuals earning today's coveted three byes. And they weren't just amateurs looking for a shot at the big time. Two-time Grand Prix winner, Pro-Tour Boston Top-8er, Jonathan Sonne slung his Lux Cannon to the top of his grinder tables.

Perusing deck lists always reminds me of just how fun the Sealed format is. Sure it's rare that you see a Steel Hellkite left in the sideboard (my cohorts say "never", but I'll stick with "rare"), but it's the place where Blistergrub can show up, main deck, in winning lists. It's the format that really tests your "23rd-card" skill. And just in case you don't believe the open-ended nature of Scars of Mirrodin sealed, check out Chris Pait's sweet Myr Reservoir-powered Grinder #10 winner. What's the Magic number that makes the Reservoir pull its weight? For Pait it was seven, and with all his myr, other artifacts and proliferate, he threw in a Golem Foundry for that extra oomph.

Showing up early to the dentist only allows you a time to breathe, relax and read last month's Woman's Day magazine. On Grand Prix Friday nights, it's the best way to get used to the carnage, destruction and mayhem ready to be unleashed the following morning – and earn prizes while you're at it. If you missed out, next time try to book a flight a few hours earlier, or urge your carpool to get up just a bit earlier. It's worth the effort.

Brad Nelson has been featured in plenty of Sealed and Draft deck techs. Rather than follow him building his Sealed pool specifically, and potentially giving away his card pool to his opponents throughout the day, I sat down with Nelson early to chat about the Scars of Mirrodin Limited world at large, as well as touching base on how he feels his deck will do this weekend and of course to discuss the Player of the Year race which he is presently leading.

Bill: How do you feel about the Scars of Mirrodin Sealed format?

Brad: It's interesting. The best part about it is that the games are really good. Sometimes you get the bomb draws. There's no way you can build a Sealed pool to just be aggro. In other formats, you could just build a deck to be aggro if you didn't have bombs, but in this format there are so many defensive cards you can't do that. Games can be really swingy because you can have board position when your opponent all of a sudden casts Myr Battlesphere and the game is over in two turns.

Bill: When you open your pool, what color combo are you hoping to be able to play?

Brad: White-red is probably the best because you're gonna get the cards like Arc Trail, Arrest, and Razor Hippogriffs. Those are the cards you're looking for. Arc Trail is RIDICULOUS in this format because everyone is playing off-casting cost Myrs and higher casting cost cards, so you take their Myr out and they're off a turn, so it slows them down in getting to their bigger end cards. A lot of decks run four, five, and six drops.

Two-for-ones are great in general anyway; there aren't a lot of ways to gain card advantage in this format. White-red is where you want to be. I don't think you want to be blue, there isn't a lot of removal in blue. You don't want to be black-green, because you'll be half infect and half non-infect.

Bill: Much has been made of that ability in Draft. What would it take you to play an infect deck in Sealed?

Brad: I opened a pool today I would have gone infect with, but had to pass it. You need a decent curve and at least 10 infect guys I think, some removal and equipment too. You need a bomb, a Contagion Engine, a Skithiryx, something to push it over. It's hard for the infect guys to push through without the equipment and removal because everyone is going to play defensive spells. Corpse Cur is another card I think you need. A chain of Corpse Curs can just whittle down a person's board compared to two Gravediggers, which couldn't. 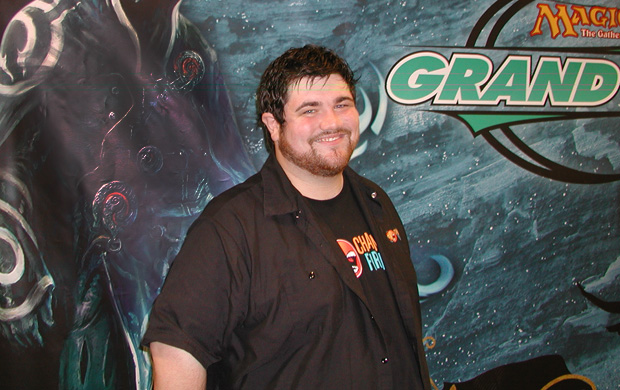 
Bill: What ways do you have to deal with "bombs" in the common and uncommon slot?

Brad: Turn to Slag is one of the most important cards that I want in a Sealed Pool. It deals with almost all of the bombs, Steel Hellkite, Hoard-Smelter Dragon, Sunblast Angel, it deals with bomb equipment. People are starting to play with Accorder's Shield a lot more, and if you can't deal with that card games get a lot harder to win. Slag beats all the big spells, it beats all the equipment. It's one of the best all around removal spells. Arrest is fine too, it deals with most of the bombs, if not all of them. Shatter and Revoke deals with most of them. That's why Hoard-Smelter Dragon is so good, because it's not an artifact. My top three cards are, in order:

None of those three cards are Tumble Magnetable. That's the problem with Wurmcoil Engine, it can just get tapped. That's how I did well at Grand Prix—Toronto, I had three Tumble Magnets.

Bill: How do you feel about your Sealed pool this weekend?

Brad: It's really good. It's the best Sealed I've had in this format, on Magic Online, anywhere. I feel very good. There are things about it that I dislike. I don't have a lot of options, which is what I liked about my Toronto deck. There I got to make a lot of decisions, there were a lot of on-board tricks. This weekend I have a lot of higher powered cards.

That's the great thing about this format, why great players win. The board gets bogged down with a lot of options, like "I can turn off my opponent's metalcraft with my removal spell," or "I can cycle my spellbomb now or hold it for more value." Little mistakes people can't even realize cost them the game until it's over.

Bill: You've stated publicly that you feel, results notwithstanding, that you don't understand this Limited format. How do you feel about your understanding of it now?

Brad: I actually think I've finally learned the format, but I just have a theory and that's about drafting the format. Sealed is a lot more straightforward. I feel like I have a good chance of doing well at Sealed because it's just about playing good Magic. In Draft, it's really complex. One of the interesting things I've found about this format is that people will take an archetype and beat into the ground that they're drafting it, but those decks will still have 3-5 bad cards I would rather not be playing. But they just ran RW Metalcraft into the ground, and then Accorder's Shield will just beat that.

So I've been drafting a lot of defensive and random midrange decks. What I've been valuing is removal and ways to deal with my opponent's deck. I haven't found one person who can take down a dinosaur (Alpha Tyrannax). It's a great Limited format, I really enjoy it. It is my favorite so far of all the ones I've played. It's so complex, it's always changing. A lot of formats are like that, but not at this pace. Accorder's Shield has gone way up for a lot of people, but Shatter isn't as good as it used to be because people aren't relying on metalcraft as much. People are relying a lot on poison.

Bill: Let's talk a bit about the Player of the Year race. Does that weigh on you when you play?

Brad: Nothing affects me when I'm playing. It gives me motivation, but I've always been motivated to do well regardless. When I'm playing, there's nothing that I'm thinking about. I'm just playing my matches and I want to win now.

Player of the Year does mean a lot to me. I'm going to work very hard to win it. The biggest problem people have is that they're thinking too much outside the game. They're letting too much emotion in, they're not just playing to win or lose. They don't take a loss and just move on. That happened to me in Toronto, I took a loss in Round 4 and let it get to me. I got a couple pep talks and shook it off.

When I'm playing Top 8, sometimes I get into a mode where I forget I'm even there. After I get done playing I look around and I'm like "Oh, there are people watching. There's a coverage reporter."

Bill: Does the fact you would become the first American in a decade to win the title hold any special value to you?

Brad: I didn't know until BDM's article that it's been 10 years since an American held that trophy. As a nation that's really cool, but I've never looked at Magic with global barriers. We're our own people. Everyone in the world that plays Magic is part of its own family. If I do win, that's cool that it comes back to the United States because that's where it belongs. We have a lot of skill here in the U.S. I wouldn't be the player I am without team ChannelFireball. LSV, Wrapter, PV, Ochoa have taught me a LOT about the game. Ultimately I want Player of the Year for myself, and for my dad. He's really gotten into Magic and he loves this lifestyle that I'm doing. He watches coverage everyday, my grandma Delila and my uncle too. It would mean a lot.

Feature Match Round 3 – Osyp Lebedowicz vs. Jon Sieber: "It's not a misplay if it's illegal."

As an amateur, coming to a Grand Prix can be daunting. With tons of players, tons of famous talent and tons of media, bringing your A-Game can be difficult. And Jon Sieber has it harder than the usual GP amateur. Though he came in with one bye and won his second round, round three paired him against Pro-Tour winner and all around Magic staple, Osyp Lebedowicz. Though he hadn't been in the game for a while, he's still strong and certainly wouldn't make a humorous misplay over the course of the match that his on-looking friends would goad him about and make the Sieber feel more at ease, right? Spoiler Alert: He does. 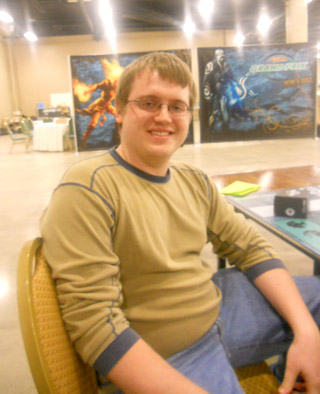 Osyp won the dice roll and elected to draw. "It's good to know you're not playing infect," Sieber quipped. A turn-two Myrsmith for Sieber was joined by a Glint Hawk Idol (+1 Myr from the smith). He sent the 2/1 in to take Osyp to 18 while Osyp answered with a Moriok Reaver.

After Sieber played his drawn <a href="https://gatherer.wizards.com/Pages/Card/Details.aspx?name=Vulshok+Replica"