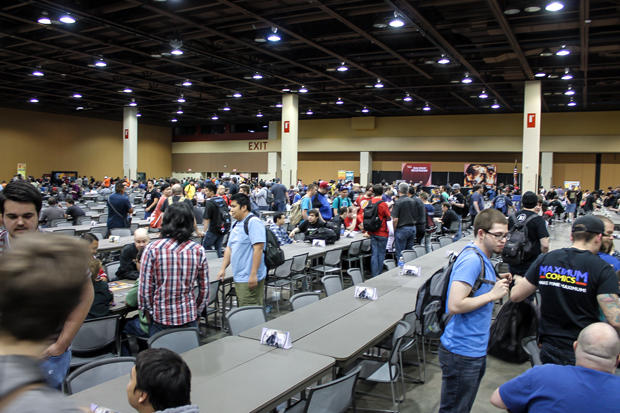 Day One of Grand Prix Phoenix has wrapped up, and a field of 1463 players has been knocked down to 172. Sitting at the top of the standings are Michael Peterson, No. 6 Ranked Player Shahar Shenhar, No. 23 Ranked Player Eric Froehlich, Grand Prix San Diego 2013 Champion Nathan Holiday, and 2012 Magic Online Champion Dmitriy Butakov.

Butakov in particular stands out as the lone combatant not representing one of the recognized Standard archetypes from the previous three weekends. The Magic Online player from Russia is taking advantage of his trip to the United States to compete in last weekend's 2013 Magic Online Championship in order to compete in a Grand Prix or two while he is here. His Bant Control deck, an interesting departure from his choice of Esper Control in last weekend's tournament, gives him some unique tools, but will they be enough to maintain his solid record?

Tune in tomorrow as we bring you live coverage from here in Phoenix, Arizona!

3 Brimaz, King of Oreskos 2 Ajani, Caller of the Pride
71 Cards

4 Fiendslayer Paladin 4 Ethereal Armor 4 Chained to the Rocks 2 Ajani, Caller of the Pride 2 Sphere of Safety 3 Glare of Heresy

3 Archangel of Thune 3 Elspeth, Sun's Champion 4 Chained to the Rocks

3 Archangel of Thune 1 Assemble the Legion