Brian Kibler is a man of many words, and almost all of them are worth listening to. Unfortunately, I'm going to have to try and distill the essence of his genius somewhat today.

Did you design this deck? Yes. Over the last few weeks, I've been trying to make some artifact lists work around Spellskite and stumbled across Vedalken Certarch . Then Sam Black wrote about a Blue/Black Proliferate list recently, and to me, it looked like the one card he was missing was Certarch.

So I brewed up a list last weekend at GP Providence and people just laughed at me. Until I went 10-0 with it against Steve Sadin and Edgar Flores playing CawBlade. Since then I've been in transit, so I haven't had much of a chance to test it further, but I continued to tune it, goldfishing it on the flight over here to try and smooth out the draws, which is important for improving the mana curve of a deck.

It's also kinda hard to get games in when everyone is testing for the Block Constructed Pro Tour in Nagoya next weekend. It reminds me of Next Level Bant last year. I played the deck in one Grand Prix, tuned it, and then won the next. I really feel like I need another Standard Grand Prix after this one (cue: infectious KiblerLaugh.) 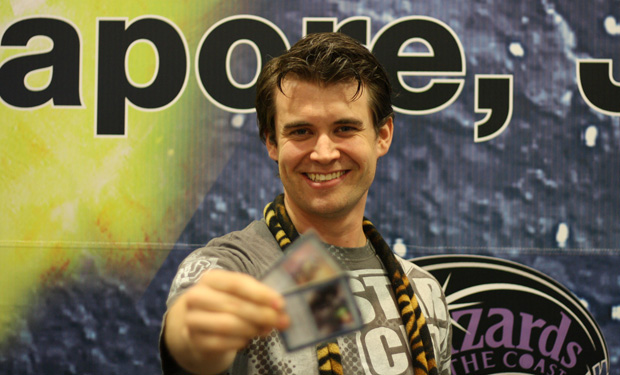 What would you change? It's definitely an untuned deck, at this point, and it's trying to take on a deck the entire World has spent the last six months tuning. The first thing I would take out is Hex Parasite . It just doesn't do enough against CawBlade. Ben Stark and I revised our sideboard plan this morning, and we're now siding out Parasite against them. One of the cards I want to put back in the deck was a card I had very early on, Flight Spellbomb ! It's really good to be able to curve out your artifacts to get metalcraft active, but with artifacts that your opponent doesn't want to disrupt.

And flying is actually relevant! Even if you don't have blue mana open, sometimes you're going to want to give your Etched Champion flying. Often against CawBlade, their plan is to poison you out with Inkmoth Nexus , because you've gained too much life from the Batterskull you copied with Phyrexian Metamorph , so the Spellbomb can actually shut down that plan. Argent Sphinx is great there too. Once you resolve it against CawBlade, you pretty much shut their whole plan down. The last card I would consider is Hammer of Ruin . I had it very early on, and I don't think CawBlade can actually beat it, if you connect with an Etched Champion holding a Hammer. I'll definitely be recording a few videos with the deck after Nagoya for everyone to check out.

Albertus Law has made several Grand Prix Top 8's, and also made Top 8 at Pro Tour Barcelona in 2001. He's taken several years off playing Magic, but decided to come along this weekend.

Ben Stark has had a string of strong Grand Prix finishes recently, and won Pro Tour: Paris with Caw-Blade in February. This weekend he's piloting a U/B concoction designed by Brian Kibler, and his opponent isn't playing Caw-Blade either, making this matchup somewhat of a rarity.

Law mulliganed, and Stark led play with an Island and a Vedalken Certarch before following up with a Steel Overseer . Law spent a Lightning Bolt on the little Lord, clearly aware how powerful he could make Stark's army. Law played a second Mountain and cast a Shrine of Burning Rage . 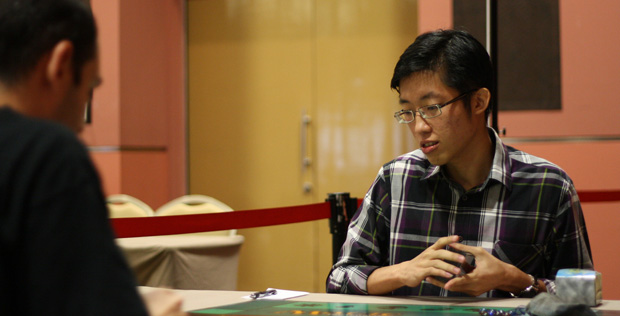 Stark summoned an Etched Champion and Law grew his board with a second Shrine and a Goblin Guide . The hasty red man triggered both Shrines and swung. Stark declined to block and fell to 18. An Ichor Wellspring found a Mox Opal , triggering Metalcraft for the Champion and letting Stark summon a Leaden Myr . Stark's Certarch tapped down the Goblin Guide , and Law used one of his Shrines to take out the Etched Champion .

Stark upped the tempo with a Tezzeret, Agent of Bolas , which animated the Wellspring. Law didn't have an answer and scooped after checking the top of his library.

Law sped out of the gates with a Goblin Guide and a Shrine of Burning Rage , while Stark grew his field with a Mox Opal and a Perilous Myr . The Guide attacked and traded with the Myr, before Law passed with no further plays.

A Spellskite from Stark was instantly Shatter ed, further developing Law's Shrine. A Goblin Ruinblaster demolished Stark's Inkmoth Nexus , keeping him light on lands. Koth of the Hammer shored up Law's board. With the attacking Mountain s bigger than the men he could summon and Law's Shrine ticking away, Stark moved to the decider. 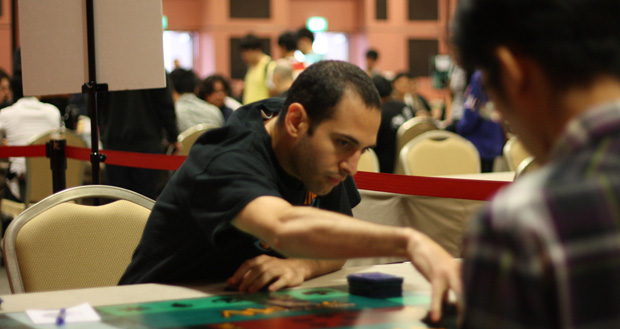 Stark under a mountain of pressure.

An early Goblin Guide was Dismember ed by Stark before a Spellskite slowed things down. Law wasn't fussed, as he cast a Shrine to mount some pressure on Stark. Stark worked on his defense with a Phyrexian Revoker , but Law had a Manic Vandal to destroy the Spellskite . A Magma Spray took out the Phyrexian Revoker . Stark cast a Tezzeret into an empty board and searched, revealing another Spellskite .

Law unleashed a flurry of burn directly at Stark's head. Two Lightning Bolt s and a Burst Lightning dealt enough damage to Stark for the Shrine to finish him off.

Mat Marr has one GP Top 8 under his belt, and has come very close to a handful of others in this region over last few years. He was more than happy to step aside and tell us about the deck he's playing this weekend.

Did you design the deck? No, it was designed by my friend Jesse Smith, who edits my articles on 60cards.com. I picked it up at 4am before the event, and tuned it very slightly, which probably made it worse.

What would you change? I'll be writing about a better version after this event, there are definitely a few things you want to change. In this format, the most powerful things you can do involve either Jace, the Mind Sculptor or Stoneforge Mystic , so to beat those, you need ways to attack what they do. We aim to two for one their threats, or race them. There are three specific plans you can follow.

Plan one: Being an aggressive Green/White deck with both Vengevine s and Mirran Crusader . We really should be playing Squadron Hawk though, leaving that out was definitely an oversight. You need them late to power up the Vengevine s, and you can probably get away with less than four Vengevine s. The Crusaders weren't as good as I imagined, and they're definitely better against me than I thought they'd be. 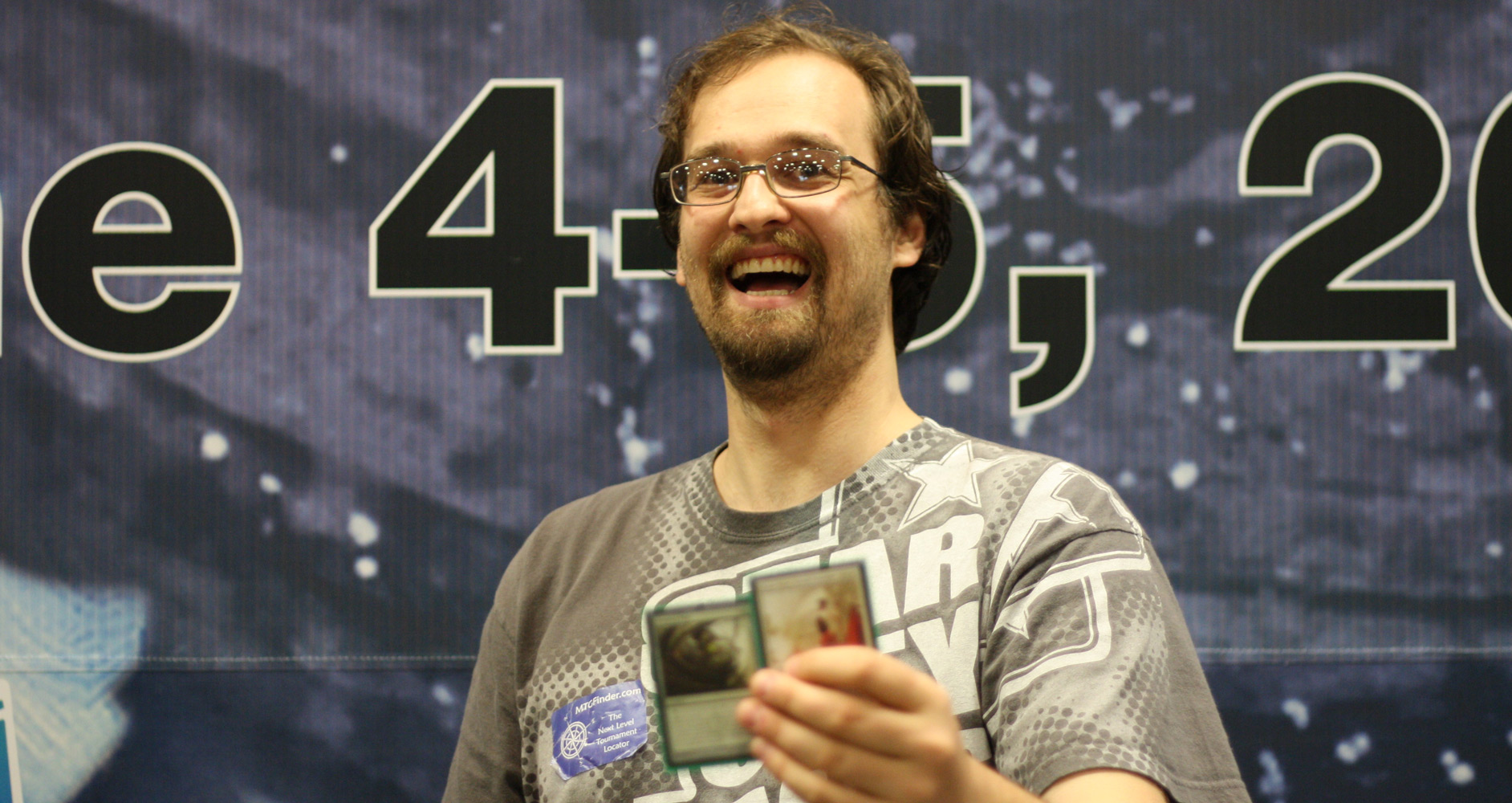 Plan two: is the Stoneforge Mystic plan. CawBlade has some advantages over us in their version of this plan, in that they have more removal, but we have advantages of our own, in that we have Fauna Shaman to more readily set it up, and Viridian Corrupter and Acidic Slime to destroy their equipment. I probably should have played a second Batterskull , as well.

Plan three: is Birthing Pod . We can chain up through the creatures with enter the battlefield triggers quite happily. Stoneforge into Corrupter into Phyrexian Metamorph all the way up to Elesh Norn, Grand Cenobite , after sideboarding. Elesh Norn is probably the single best thing you can resolve against CawBlade in the format. It stops almost everything they can do. The only problem is when you get it, they just scoop, it's no fun!

Mat Marr is running well this weekend. His deck, featured in a Deck Tech earlier today, is specifically designed to combat Caw-Blade, and he's been doing an enviable job so far.

Shouta Yasooka won GP: Kobe earlier this year and has been Player of the Year twice, once in paper and once online. Yasooka is running a tweaked U/B control deck.

Marr opened Game 1 with a Birds of Paradise into a Lotus Cobra , which was promptly Doom Blade d. Yasooka followed up with a Preordain before casting an Inquisition of Kozilek . Marr fanned his hand and revealed Phyrexian Metamorph , Birthing Pod , Sun Titan and Acidic Slime . The Inquisition whiffed, but Yasooka had scouted what his opponent was running. 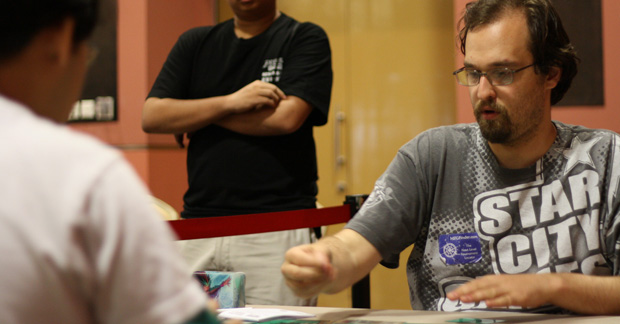 Marr cast his Birthing Pod . Yasooka had a Jace, the Mind Sculptor which bounced Mat's Birds of Paradise , leaving the Pod sitting alone on the battlefield. Marr pondered his options.

Marr tapped 4 mana, then summoned a Birds of Paradise . The remaining mana and 2 life went on a Phyrexian Metamorph , copying the Birds.

Yasooka merely raised his eyebrows and cast a Torpor Orb . Marr tried a Sun Titan , which ran into a Mana Leak . Yasooka followed up with Consume the Meek and Disfigure to wipe Marr's board, a Tumble Magnet to hold off any aggression, and Tezzeret, Agent of Bolas . His engine shut down, Marr wasn't able to recover and died to a 5/5 Inkmoth Nexus .

Marr began with a Spellskite to protect his utility creatures. He followed with a Lotus Cobra , which was Mana Leak ed, and a Birds of Paradise .

Yasooka tapped down for an Everflowing Chalice , which gave Marr an opening to cast and activate a Birthing Pod and trade in his Spellskite for a Viridian Corrupter , destroying the Chalice. 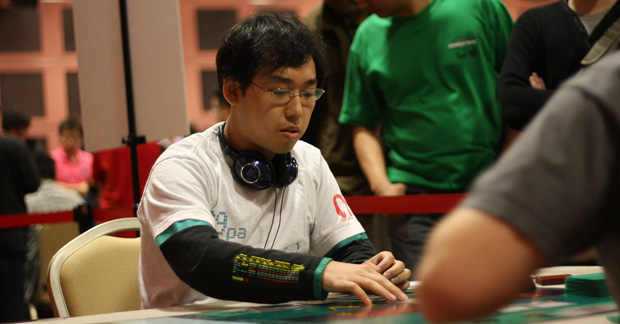 Yasooka Disfigure d the Birds and cast a Tumble Magnet , tapping down the Pod in Marr's upkeep. Marr hard cast and activated a second Birthing Pod , paying 4 life for the privilege fetching a Vengevine and attacking. Yasooka Doom Blade d the Vengevine and cast Tezzeret.

Marr summoned a Fauna shaman and passed, while Yasooka cast a second Tumble Magnet and a Torpor Orb . The Orb shut down Marr's engine, and the Magnets held off Marr's aggression long enough for Tezzeret to power Yasooka to victory.

While aggressive Boros decks have fallen from favor in the last 6 months or so, amiable Japanese Pro Chikara Nakajima is running hot with it this weekend. I managed to tear him away from crushing the hopes and dreams of CawBlade players for a quick word.

This seems like a pretty standard version of Boros, what changes have you made? The Japanese Boros list has two Batterskull and two Sword of War and Peace , but Batterskull is a very top heavy card, so I removed one for a Hero of Oxid Ridge . The Hero is really good against CawBlade and any green deck. I am 5-0 against CawBlade this weekend! 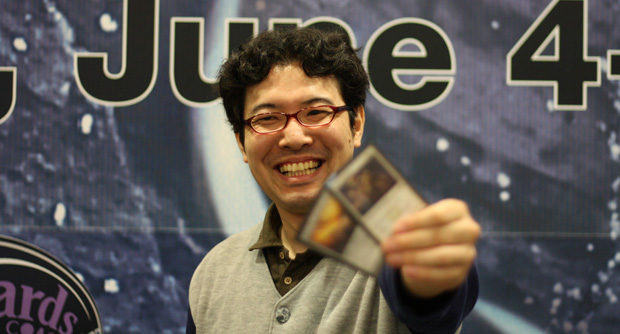 2 Sword of War and Peace 1 Batterskull

1 Hero of Oxid Ridge 3 Koth of the Hammer