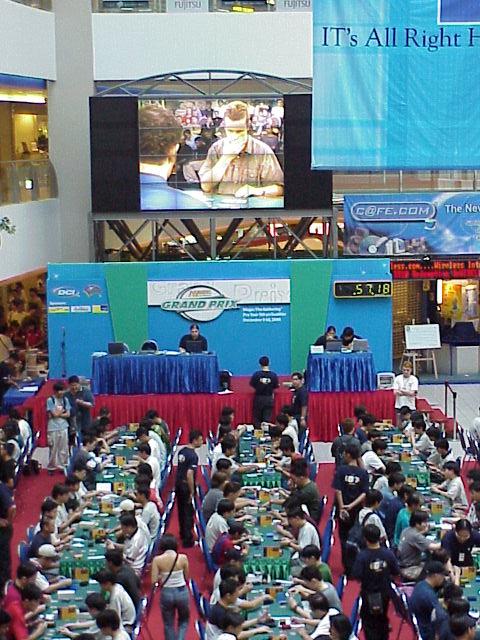 Sam Lau, from Singapore, won GP Singapore, defeating Jonathan Chan in the finals, 2-0. He played Trix to a near perfect record in the Swiss, placing him as the fifth seed going into the Top 8. Jonathan Chan made 2,200 USD, while the runner up Sam Lau walked away with 1,700 USD. Runner up Chan, also from Singapore, played a Sligh/Ponza hybrid deck that performed well for him until he met Sam Lau in the finals. Grand Prix Singapore was very positive, with a large audience following the standings and observing the tournament.

With the event being held in a mall, there was a steady stream of curious onlookers, who were interested in learning about the game. The demo areas were constantly packed with people trying it out for the first time. Gunslinger Henry Stern had a constant line of excited opponents, waiting to test their mettle against a member of R&D.

Artist Daniel Gelon, best known for illustrating some of Magic's classic cards, was on hand to sign cards and draw on demand.

Side events packed in enthusiastic players. Singaporean players were so exited to have a major event in their backyard that they played side events constantly, almost filling the entire area.

It is interesting to note how well each individual deck did in the tournament. While Sligh was the most popular deck on Day 1, it virtually disappeared on the second day, with none showing up in the Top 8. Sligh isn't an optimal choice against anything in the field, since other decks do what it does better - it tends to be the default deck people play when they cannot make up their minds as to which deck is best. Trix did well placing three people in the Top 8. Other decks that did well included the Finalist Chan's Sligh deck and Masayuki's Suicide Black.

Head Judge Mountain Hung presided over a very clean tournament, with no real disputes or problems. His judging staff was very good - over half of them advanced a level in certification testing.

The awards ceremony was highly spirited, with very loud applause. Players felt that Sam Lau deserved his win and the entire situation was very sportsmanlike. The sportsmanship displayed by the Singaporean players was impeccable, with almost no conflicts at all. The entire event had a highly upbeat sentiment - and it was one of the most enjoyable I had ever seen.