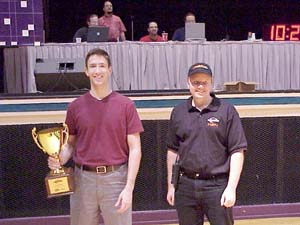 GP Tampa Champion Sol Malka Grand Prix Tampa drew to a close, ending one great weekend of competitive play. Many of the top North American players attended this Grand Prix, including all eight members of the Magic Colony. In the end, "The People's Champion" Sol Malka overcame 16 rounds of play to take the top prize. The competition leading to this title was some of the most fierce in recent memory, with 4th through 12th places ending in a tie at 31 points.

Black was the story of day one, with a vast majority of the decks playing Black. Interestingly enough, of the six decks that went undefeated on day 1, four of them played Black, while five of them played Green.

On the second day, many players chose to avoid Black, since unlike the previous day, there was only a single pack of Torment. This strategy worked for many, but also created situations where players were able to draft mono-black decks which swept entire tables.

So what did we learn from this weekend?

On top of that, here are some observations I made during the event:

Until next time, this is The Sideboard signing off. We hope that you enjoyed the coverage we provided of Grand Prix Tampa 2002, and look forward to having you in our audience again for coverage of GP Antwerp and Pro Tour Osaka in the coming weeks!