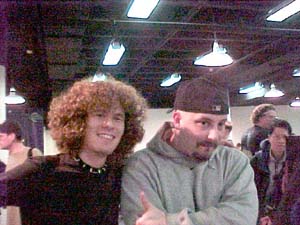 Just two days before Wrestlemania X-7, Josh Bennett gave us a preview in his 2-0 defeat of John Rizzo in a brutal hardcore match. Bennett's victory featured multiple piledrivers with a Phyrexian Scuta and a bone-crunching DDT using the appropriately named Death Bomb.

As players began to sit down for the first round of the 132 player Grand Prix Trial, I started to look down the list for an interesting feature match to report. I only had to go down two names on the list to see that Josh Bennett was paired against John Rizzo. I immediately called their names on the microphone, announcing that they would be the first feature match of the Grand Prix Detroit weekend.

Josh Bennett is one of the most electrifying Magic writers on the Internet. He writes a regular column for StarCity Games and does regular event coverage for Pro Tours and Grand Prix for Sideboard. Josh is a young man from Ontario, Canada and has one of the biggest afros I've ever seen on a white man. Bennett's is like a wondrous hybrid of Dennis Miller, Aerosmith's Joe Perry and Horshack.

John "Friggin" Rizzo is also a regular columnist on StarCity Games and has a loyal Internet fan base - well, as loyal as an Internet fan base can be. His main gimmick is his nasty personality, which is as bogus as a George W. Bush's "compassionate conservatism". In reality, Rizzo is clearly a lovable guy who only wants to fit in.

As the players shuffled up their decks to begin their match, a small crowd started to gather. Alex Shvartsman came over to watch the action, excited as a little girl at a country fair with a fully-stocked petting zoo. A couple of the staff of CCGPrime came over and started writing up a match report. They had a laptop at the ready, trying to scoop my feature match exclusive like CNN anchormen on election night. Although these youngsters would have their match report up before mine, it clearly wouldn't have the same jaded perspective that 29 years of impure living provided. Another one of the spectators to skulk over was Joe "Mouth" Kambourakis. "Mouth" is a good example of youth gone astray. He is like the Backstreet Boy that got left at the Jersey airport while he wandered away looking for a cigarette machine.

I asked the players if they were nervous. Bennett said, "I always get nervous before a big event. I don't want to ruin my reputation as a Magic writer."

Rizzo mentioned that he didn't have a reputation that he could ruin and Shvartsman agreed saying, "It doesn't really matter for you."

Rizzo offered everyone a Cinnamon Altoid. Altoids and Penguin mints are the ultimate social candy. It's impossible to open the little metal container without offering one to everyone nearby. I sometimes wonder how many sweat, grime-encrusted hands have been rifling through the Altoids box trying to find the perfect Altoid. That's just one of the things in life that you can't think of too much otherwise you'll go crazier than Reagan. (Editor's Note: The political views expressed by Mr. Donais do not necessarily represent those of Wizards of the Coast or the Sideboard Staff)

Both players were using the custom PES Grand Prix Detroit scorepads. Rizzo was going sleeveless while Bennett protected his deck with the pearl-colored Ultra Pro sleeves. From my experience, these are the best sleeves that Ultra Pro has to offer. It's much better to use white sleeves than black sleeves because thumbnail marks and small bends don't show up as easy, which translates to less warnings for marked cards. 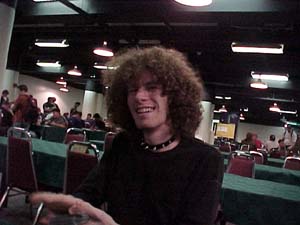 The players dramatically rolled a black 20-sided die to see who would choose the play order. Rizzo started by rolling an impressive 17. Bennett clearly felt inadequate when all he could muster up was a 10. Both players drew their opening hands and neither decided to mulligan. The game was on!

Rizzo played a Swamp first, which Bennett matched on his turn. Rizzo commented, "Rizzo lays a Swamp, Bennett counters with his own."

Rizzo's played a Mountain on his next turn, commenting that he was now giving away the colors of his deck. Bennett played a Swamp and noted that he wasn't giving away anything.

Rizzo repeated his comment and played a swamp, ending his fourth turn. Bennett played his first creature of the game, a Caldera Kavu. Mouth was still watching the match and piped up with, "That's guy's the best!"

With no Islands in play, Rizzo sacrificed his Morgue Toad next turn, using the blue mana to play Urborg Emissary with kicker, bouncing the Caldera Kavu and causing the Mourning to be buried. There was no way that Bennett could return the Mourning to his hand because Rizzo had sacrificed the Morgue Toad for mana, which was an activation cost.

Bennett replaced his Kavu next turn and asked Rizzo how many cards were in his hand. Rizzo replied, "5 cards - no land unfortunately." Rizzo was in the unfortunate situation of having several blue cards in hand without any blue mana sources. He attacked with his Urborg Emissary and was done.

Bennett attacked with his Caldera Kavu, but did not pump it. He used his Exotic Curse to kill the Emissary and played a Shivan Zombie. The game was definitely going his way at this point. Rizzo's next draw was a Breath of Darigaaz. He muttered after he saw the Earthquake-like card. He played the card, uttering "Smash!" and then said, "I want blue mana sometime today."

Bennett's next turn featured "Probe with kicker", the words that everyone dreads hearing in Invasion block limited. As Rizzo discarded a Confound and Mountain, Bennett drew his cards and discarded two lands. Alex Shvartsman commented, "Card economy has been regained."

Rizzo was not yet discouraged as he drew a Slingshot Goblin on his next turn. As he played the card he mentioned, "Finally, something I can play."

Bennett dropped the big elbow next turn with Phyrexian Scuta. He tapped his mana and said, "Kick that up!"

Rizzo drew one possible answer as he announced "Fatty. Big, big fatty." He played a Vodalian Serpent with kicker, which is a perfect blocker for the Scuta. He looked across the table at Bennett and asked, "Agonizing Demise with kicker?" as if daring Bennett to have one.

Bennett didn't disappoint as he indeed played Agonizing Demise with kicker on the Serpent, doing damage to Rizzo as he removed the blocker. Alex Shvartsman commented, "He called it!" Bennett then attacked with the Scuta and Rizzo started to consider whether he would block using the Slingshot Goblin. Eventually Rizzo decided that is was better to not block and save the Slingshot Goblin so that he could enchant it with Sleeper's Robe and attack with it next turn. This put Rizzo down to 3 life. On Rizzo's next turn he played Sleeper's Robe on the Slingshot Goblin and attacked, drawing a Soul Burn from the ability of Sleeper's Robe. Rizzo played the Soul Burn, which brought him to 5 life. Having nothing else to do, he ended his turn.

Bennett untapped and attacked with the Scuta for the final 5 damage. Rizzo whined, "Who attacks!?" Game one went to Josh Bennett.

Both players went about looking through their sideboards for something that would give them an advantage in the next game. Rizzo commented, "You've got good cards."

Bennett responded with, "That's why they call it sealed deck." 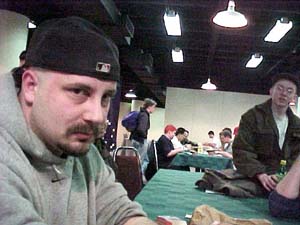 After several long minutes of silence, Rizzo decided to add some commentary, "There was very little banter in between the games."

Bennett played along, "They were stoic, as always."

The players then started talking about the online War of the Internet Writers, a contest on CCGPrime where readers vote for the best writers on the Internet. Both players exchanged views on how they were doing and Rizzo said, "Your readers are more religiously psychotic and are more likely to vote."

With the banter apparently finished, the players moved on to game two. Since Rizzo lost, he had the option of deciding who would play first and, of course, he decided to play first.

Neither player decided to mulligan, although Rizzo considered it since his opening hand only had a swamp and mountain for land. Rizzo started with a swamp and was done. Bennett played a mountain then Rizzo played a mountain. Bennett's second turn was strong as he played a Swamp and a Shivan Zombie. Rizzo exclaimed, "Who gets their mana perfect!" He followed up by drawing an Island and said, "I guess I do!" He played a Kavu Scout, which was 3/2 because Rizzo had three different basic lands in play.

Bennett attacked with the Zombie, which went unblocked. On Rizzo's next turn he tapped a Mountain and an Island and played Sleeper's Robe on the Kavu. Bennett, seeing that Rizzo had tapped the wrong mana, said, "Are you going to pay the right mana for that?"

Rizzo, realizing his mistake, then tapped the Swamp and untapped the mountain asking, "So, do I burn for one." Bennett shook his head no. Rizzo attacked with the Kavu and drew a card from the Sleeper's Robe ability.

Bennett was forced to hold the Shivan Zombie back on defense next turn. Rizzo looked at the Zombie said, "It would be nice to draw some removal right about now." When he drew a Breath of Darigaaz he said, "I should have been more specific." He played a Morgue Toad and was done with his turn. Bennett used Strafe to remove the Toad next round and was finished.

Rizzo drew a Skizzik next turn and attacked with both the Skizzik and the Kavu. This was probably an unnecessarily aggressive mistake as Bennett used Agonizing Demise (without kicker) on the Skizzik and blocked the Kavu Scout with the Zombie. There were now no creatures on the table.

On Bennett's next turn he played Recover on the Shivan Zombie and played it. Rizzo did nothing on his next turn, although he had plenty of land in play. Bennett played a Lava Zombie, returning the Shivan Zombie to his hand as part of the Gating requirement. Rizzo looked at his hand and commented, "I am holding an annoying assortment of cards" referring to his Recoil, Soul Burn, Breath of Darigaaz and Death Bomb. When Bennett attacked next turn with Lava Zombie, Rizzo played Recoil to try and return it to Bennett's hand. However, Bennett used Confound to counter the Recoil.

The next turn was complicated. Bennett used Reckless Spite, targeting Rizzo's Apprentice and Attendant. Rizzo responded by sacrificing the Attendant for mana and using Death Bomb, sacrificing his Apprentice and destroying Bennett's Kavu Scout. Bennett removed the five life from his total until, like a Florida recount, judge Duncan McGregor reminded the players that Bennett didn't actually lose five life because the Reckless Spite was countered since neither one of it's targets were still in play when the spell tried to resolve. 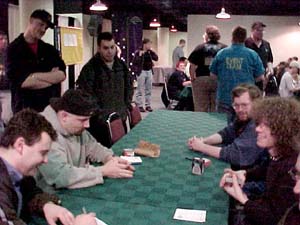 Bennett played a Viashino Grappler, only to have Rizzo Soul Burn it for one. Rizzo then used Terminate on the Shivan Zombie, against clearing the board. Rizzo played an Urborg Emissary, which was quickly destroyed by a Zap from Bennett.

Bennett let Rizzo knew he was serious about winning this game when he played a Phyrexian Scuta with kicker. Rizzo thought he could slow the Scuta down when he played a Tower Drake, only to have Bennett Recoil it and attack with the Scuta. Bennett then played a Thunderscape Familiar and was done his turn.

Rizzo's replayed the Tower Drake but Bennett used Death Bomb to sacrifice his Familiar and destroy the Drake. Bennett quickly finished off Rizzo and gave him a two-handed handshake in a show up good sportsmanship. Both players then posed for pictures afterward.