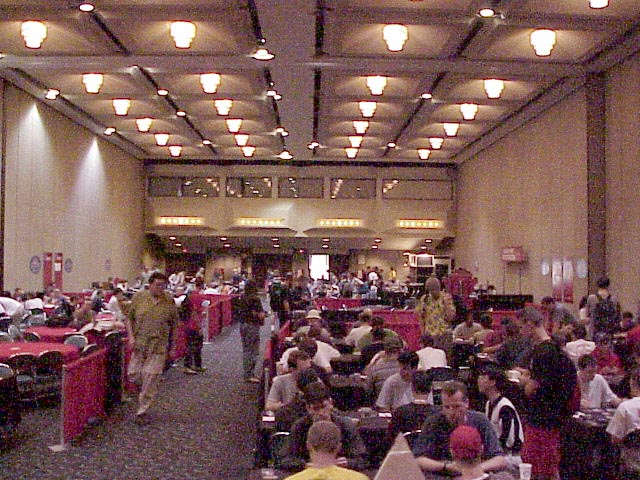 The four Canadian Open are both the last chance for players to qualify to play in Canadian Nationals and a good litmus test for the general metagame of the tournament as well. Sixteen players from the four Canadian Opens (two limited, two constructed) will join 108 other competitors in the hunt for the National Championship. Ryan Fuller and Murray Evans duked it out in the finals last year, and while Fuller's recent move to Europe leaves him unable to defend his crown, Murray "The Mauler" remains to fight against the horde of challengers.

One of the reasons that the U.S. Open is such a highly watched tournament is the hope of uncertain players to scrounge up some new bit of deck technology, or to get an idea of what they can expect to face from the field at the actual National Tounament. The Canadian Open is no different. Eighty-two competitors entered the first Standard Open, with Fires and Probe-Go being the clear favorites of the field. Fires of Yavimaya may be no surprise - since Chicago Fires decks have been all the rage, with numerous variants cropping up. Probe-Go is a bit more of a surprise. Until recently, Probe-Go had few supporters in players like England's Warren Marsh and New York City's Sean McKeown. The European Championships, however, were all but dominated by newer versions of Probe-Go, and this domination extended into the Amateur Championships as well. It's unsurprising that this deck was incredibly popular in the very diverse field of the open.

The field was extremely diverse, likely from a combination of several factors. With the impact of Apocalypse not entirely tested, many players chose their decks based on individual preferences and local whims, and many players in Open events have less experience in creating competitively designed decks. Fires and Probe-Go both dominated the single-elimination tournament, with Skies and Counter-Rebels having a slightly smaller, but significant presence. A single Sligh-like Red beatdown, similar in design to Dave Price's now famous Neutral Ground Red Deck, was also successful early on.

In the end, the field was dominated entirely by mono-blue beatdown. Most of these decks were tailored with Fires in mind, and already have a history of being quite good against the slower control decks like Probe-Go. Interestingly, each of the Probe-Go decks fell to some form of mono-blue beatdown.

4 Merfolk of the Pearl Trident

A few interesting Pernicious Deed decks, both very different, showcase the first attempts to abuse the powerful new Nevinyrral's Disk. While neither qualified, perhaps they may break the way for other decks' success.