Having made the trip up from Adelaide to play in the grinders to try and win a birth into nationals, these two players were lucky enough to meet a friend in the first round. To make matters even worse the two had built their decks on the same table, so they knew exactly what the other would be playing. Hart played Counter-Rebel in the Adelaide regionals prior to nationals and was unlucky to not make the top 8 after starting out with a 3-0-1 record. Vinall on the other hand chose not to play in regionals as he was "tied down with University work" and wasn't even sure if he was going to come to nationals even if he did qualify. Vinall is sporting the typical Pro Tour red/black/blue colour combination, while Hart is playing black/white/blue due to the power of his rares. 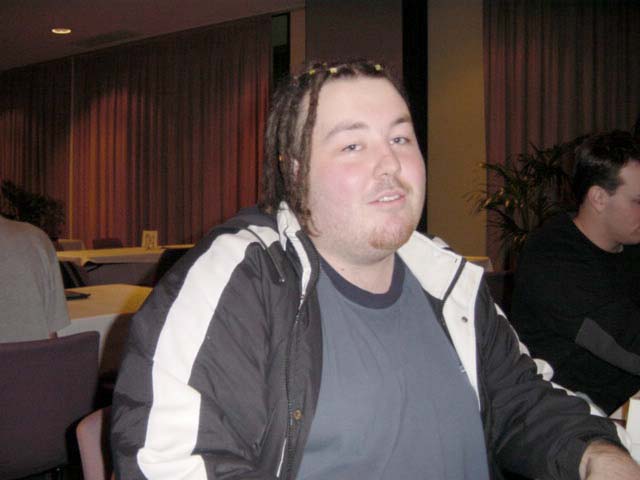 Vinall wins the die roll and plays a Shivan Zombie on turn 2. By turn 3 he has all the different types of colored land of his deck in play. Hart also completes his set and plays a turn 3 Vodalian Hypnotist, which is Sleepers Robed on turn 4 to allow it to sneak past a freshly summoned Mire Kavu from Vinall. Hart jokes that the Robe is an excellent card in this match up as r/b/u only has about 4 million different spells that can remove his small 1/1 creature. This proves true as Vinall Soul Burns the poor Zombie and sends in his troops for 6 damage. With his life rapidly being pecked away Hart is forced to chump block the Kavu with his Auroa Griffon, as he hopes to swing back the balance with the Dromar, the Banisher that he's just drawn. Unfortunately for him Vinall has his Ghitu Fire and sends a 6 point torch to his head to end the match.

Vinall starts off game two with a mulligan, and after casting a second turn opt it seems that he won't be facing any problems mana wise. The first permanent of the game is a fourth turn Aurora Griffon from Hart, which is nullified by Vinall's Nightscape Familiar which helps to gate in a Cavern Harpy. Hart then plays one of several of his power rares, Sunscape Master, which Vinall can only respond with a Phryexian Reaper. The two then trade shots at each other's life back and forthn, with the Master returning the Reaper to Vinalls hand. Vinall seizes his opportunity and casts his drawn Ghitu Fire on it. Hart calmly places it into the graveyard, untaps, draws and then lays down his Dromar, the Banisher confident that Vinall will have no more removal with the Fire gone. Vinall is forced to use Harpy tricks to try and keep himself alive as he desperately searches for an answer to the big dragon and soon finds a Silver Drake on the other side of the board, helping to eat away at his descending life total. When he does finally find some sort of answer in a Tsabo Tsavoc it is excluded, and he scoops up his cards after that.

While shuffling up for the last game Vinall jokes that he's horrible at the game but he's going to beat Hart anyways, explaining that he could have cast his legend killer when Hart was tapped out but chose to wait an extra turn. 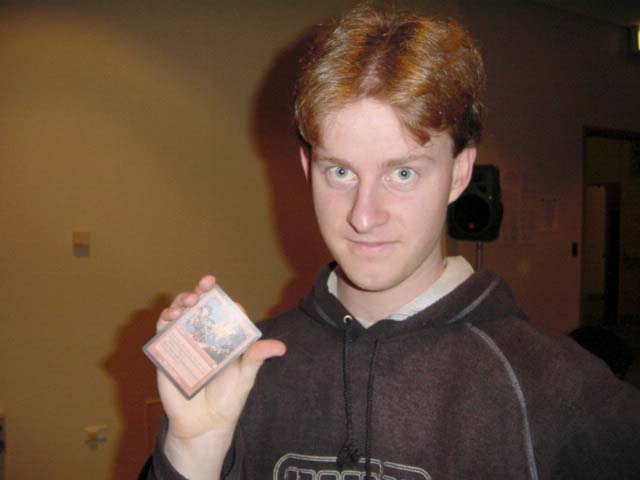 This time it's Harts turn to start of the game with a mulligan and Vinall pumps his fist and flashes his hand to spectators as its almost identical to the hand that won him game 1. Vinall starts with a second turn Shivan Zombie, which is met by a second turn Galina's Knight from Hart. Vinall then attacks and gates in a Harpy. Hart chooses not to attack during his turn as he'd rather not trade 1 life and a dead Knight for tempo advantage, instead he summons a Vodalian Hypnotist.

Vinall then plays his Mire Kavu and attacks for 2 with his Harpy, which Hart has no answer to, and drops to 16 life. Choosing to hold back his Knight on defence Hart can only drop another land and stare blankly at his hand, which requires the swamp he is missing from his land pile. When Vinall then Hypnotic Clouds with kicker the last 3 cards out of Harts hand he can only watch as Vinall summons a Hooded Kavu and a Faerie Squadron to complete the savage beating that decided the game.