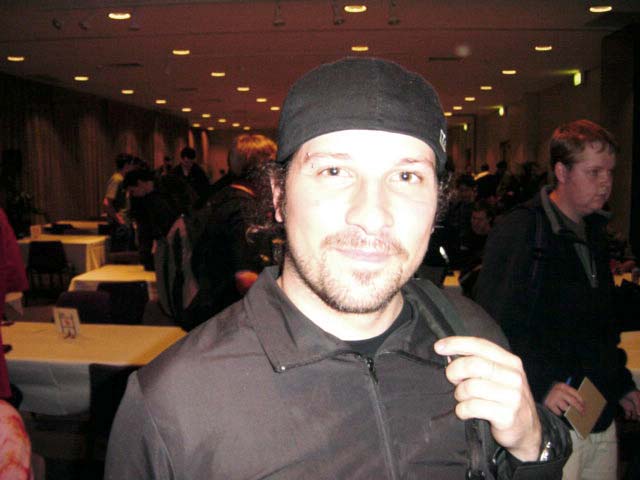 Having fought through the first 3 rounds, these two faced off with the winner finishing in the top 4 and gaining a birth into Nationals tomorrow. With both players playing Nether-Haups, 2 of the 3 in the top 8. The match up was fast and furious, as the two fought for control of the others Nether Spirit.

Having elected to go first Lee played an assortment of lands for the first 6 turns, which is not all that uncommon for the Nether-Haups arch type. Smith on the other hand drew and discarded his spirit first turn, allowing him to get in fast early beats against Lee. When Smith cast the first board reset Jaukaulhaups, he was hit with an Urza's Rage with kicker in response, leaving him on 9 life (after taking a damage from a City of Brass). Again the two players rebuilt their lands, but Smith had a distinct advantage with the only Spirit pecking away at Lee's tiny life total. It was too little too late when Lee finally drew his Spirit, as it was taken care of by a Scorching Lava with kicker, and his life total was soon at 0.

After not drawing a spirit till late in game 1, Lee was eager to gain the Spirit advantage and Vampiric Tutored for one at the end of Smith's second turn. The two then laid more land for the next 2 turns until Smith found a Spirit of his own. Lee then untapped and showed his mirror tech Shivan Harvest, which would allow him to sacrifice his Nether Spirit every turn to kill one of Smith's non-basic lands. Smith however was not eager to see this play used and he Voided away the Spirit and then Cremated it, gaining the Spirit advantage. Lee was helpless as he Cremated away cards in vein hoping that he could find an answer to the opposing Spirit, and when he tried to Vampiric Tutor for an answer he was burnt out with an Urza's Rage and a Scorching Lava.