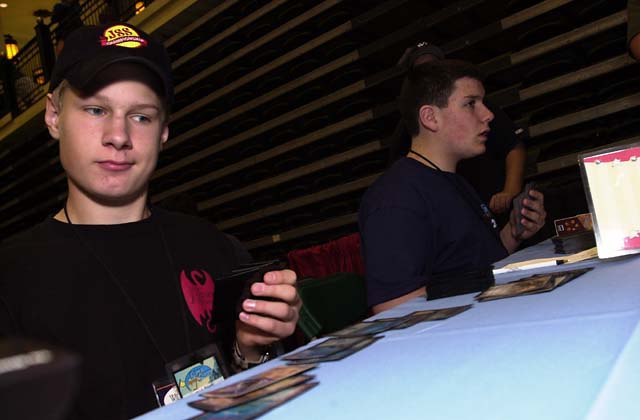 It's nice to know that some things never change. Your Move Games and Neutral Ground, the best-known stores in Boston and New York respectively, have long been producing the finest talent the USA has to offer while maintaining a grudge superseded only by that of the cities they're located in. Jon Finkel, Darwin Kastle, Dave Humpherys, Steve OMS, Zvi Mowshowitz, Rob Dougherty, Justin Gary, Mike Pustilnik, Dan OMS, Billy Jensen and many others have called one of these stores home at one time or another, and things don't appear to be slowing down.

This year's Junior Super Series is the latest tournament to feature the grudge, which has been embodied recently by the agreement between the two stores to hold the seasonal competition, Grudge Match, that sees the finest from both stores meet to square off and see who has the right to claim superiority until the end of the next season. The JSS Championships roster includes two young men, Russel Harnew of New York and Paul Rietzel of Boston, who embody their skills and spirit of their respective stores, not to mention the competitive spirit between the two.

"They're not very good" Paul generalizes about Neutral Ground. "A lot of their players work very hard, and I respect that, but the simple fact is they lack the necessary skills. One player who has traditionally done poorly at YMG just won one of their Grudge Match Qualifiers-that just shows that their deck designs aren't too innovative and their players hardly match their deck designs."

"They've never won the Grudge Match-they're obviously incompetent", retorts Russell "They seem incapable of winning individual Pro Tours, and we have Finkel and the OMS brothers. I just don't see how they think they can compete."

Known as 'Little Darwin' amongst his fellow YMG tourney-goers, Paul receives a lot of praise from his more experienced teammates. "He's very good at both Limited and Constructed" says five-time Top 8 finisher Darwin Kastle "People underestimate him, thinking he's just a goofy kid, but he learns every time he plays the other YMGers and he isn't ashamed to do so." Dave Humpherys, who Paul calls the best player he's ever played says "Paul has a great attitude towards learning about the game. He seems to take something new away every time he plays one of the pros at the store, and his abilities are definitely above average among kids his age."

Meanwhile Russell also receives high praise from the other denizens of his home store. "Oh, you mean the Lil' Miser" says Tokyo Champion Zvi Mowshowitz, referring to Russell's online nickname "He's definitely the most dangerous kid at Neutral Ground. He's establishing PT connections, meaning he's getting the best decks and knows how to play them. He shouldn't be too far away."

"Russell is one of the funniest kids I've ever met" says veteran writer and Neutral Ground player Toby Wachter "Neutral Ground is the toughest place in the world to play, so the fact he's keeping up with the players at the store means he can beat anyone."

Both players are high school students, with Paul a hockey player while Russell wrestles. It surprising how alike these funny, outgoing kids are, but don't tell them that. When it comes to improving, its Paul who offers some very sound advice: "Play with better players than you, and do it as much as possible. You don't really get a feel for tense tournament play unless you actually put yourself in that position." Russell agrees: "You really learn a lot by playing with players like Mike Flores and Chris Pikula who are willing to help you learn, just as long as you're willing to listen. I can feel myself getting better."

With Neutral Ground having won both Grudge Matches thus far, Paul is ready to try to take the title for his team, but he's not quite there yet. "I still have some improvements to make on my game, but I'm playing a lot, so it'll come eventually." He's going to need it to if he's going to back up his big words. Fortunately for both stores, in the years to come, Russell and Paul will be there, winning matches while holding their grudge.