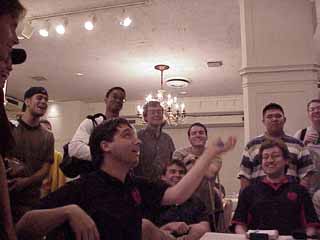 Your Move Games and Neutral Ground ran a very popular series of Standard tournaments earlier this year called the "Grudge match." Each store ran a series of qualifiers that culminated in an invitation-only tournament for $2,000 (each). Then the winners from each store faced off last night here in Pittsburgh in front of a very vocal crowd. Tom Guevin ran the able at the Your Move final and represented Boston last night while James "Bo" Bradley won the Neutral Ground final and represented New York City. 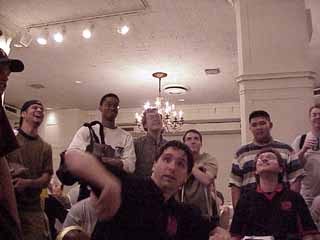 The format for the finals was kind of cool too. Each player had to bring three Standard decks and the decks had to legal if you stacked them on top of each other. That is, no more than 4 ports total between all 3 decks, etc. Best 2 out of 3, best 2 out of 3 matches claimed the $5,000 Grudge Match championship and a thousand dollars cash. There was a lot of speculation before the event about who would play what and I'm sure much metagaming went on between the two finalist. 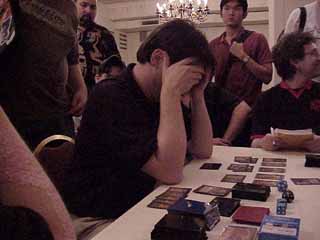 In the first match, "Tight Tommy" ran Trinity Green and Bradley ran a Control Black deck that looked like a card for card copy of fellow Neutral Grounder Jon Finkel's US Nationals winning deck. Bradley looked good early when he cast Vicious Hunger on Rofellos and used Vampiric Tutor to Eradicate a Skyshroud Poacher. However, things looked a lot worse for him when Deranged Hermit hit the table. Bradley couldn't answer that threat and Guevin took a one game lead.

Dave Price summed up the flavor of the match very well when Mario Robaina showed up and asked what was going on, saying, "On the one hand you've got a raving lunatic and on the other hand you've got a guy who seems a little bit flustered by Tommy's antics, but is playing all the right cards anyway." Shouts of "Come on Tommy!" echoed around the room as game 2 started. 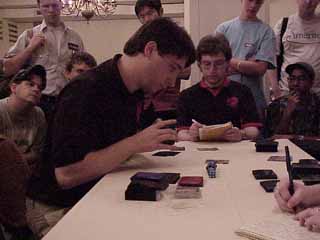 Needless to say, things get harder for Guevin after sideboarding. Perish cost him in game 2. Then after teasing Aaron Forsythe about the fact that he (Guevin) chose to play Trinity and not Angry Hermit, Guevin had an amazing start in game 3. He played turn 1 Llanowar Elf and on turn 2 he both Wordly Tutored for and cast Rofellos, Llanowar Emissary. Since he got to go first, it looked like he could cast Plow Under before Bradley ever got to 3 mana. However, Bradley used Vampiric Tutor to set up turn 2 Dark Ritual - Engineered Plague "Elves". Ouch! Guevin was down three cards and all his tempo and never really recovered.

Match #2 pitted Guevin's Ponza deck (sporting not just signed Avalanche Riders, but Darwin Kastle himself sitting next to Tom and cheering for him). Guevin was even wearing a Your Move Games shirt - the first time he has ever worn one. Not wanting to be out done by rival storeowner Rob Dougherty, Brian David Marshall found a Neutral Ground shirt for James Bradley and Bradley pulled it on between matches. 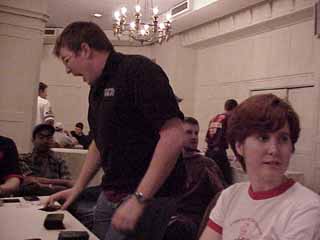 Bradley ran Stompy and won the die roll. Die rolls involving Tom Guevin are something to see. He throws the die up as high as he can and catches it a few times before actually rolling it on the table. His patented randomization method failed him this time as Bradley rolled a 1, but so did Tommy. The crowd went nuts. Guevin lost the reroll - not good in a matchup of Ponza versus Stompy. Guevin had a turn 3 Lightning Dragon (thanks to Sandstone Needle), but Bradley had Elf, River Boa, and Albino Troll by that point. Bradley then cast Blastoderm followed by Tangle Wire. Onlooker (and fellow Bostonite) Billy Jensen could help but remark 'What a vicious beating!' It was indeed - on to game 2. 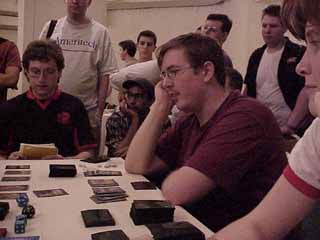 With his back to the wall and on the brink of elimination, Guevin started mounting a comeback. His turn 3 Lightning Dragon in game 2 was a lot better since Bradley had gone 2nd and had a slower draw anyway. Guevin evened match #2. Bradley slowed down Guevin's mana development in game 3 with a Tangle Wire, but Guevin managed to finally sweep the board with an Earthquake that left him at 1 life. The game was very winnable at that point for Guevin - with Hammer running, Shocks in hand, and Ring of Gix and Cursed Totem on the table the only card he couldn't deal with was Blastoderm. And that's exactly what Bradley drew and cast. (Guevin may have made a mistake by attacking with Ghitu Encampments on the previous turn instead of leaving mana open for Port and denying Bradley access to 4 mana.) Guevin chump blocked for a few turns and needed to top deck to win, but he top decked an Earthquake and cashed in a draw. 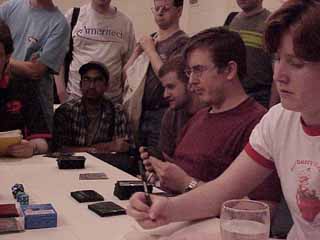 Game #4 was quick and deadly. Bradley played out a Jaguar, a Troll, and a Rancor. Guevin had no choice but to try an Earthquake for 3 while Bradley had only one Forest untapped. Bradley had Giant Growth ready to save the Troll and that was that. James Bradley is the Grudge Match champion and $1,000 richer. Guevin definitely put on a show and has created a real fan following, but he had unfortunate matchups and it would have stayed bad if they'd gotten to their third decks where Guevin had Replenish and Bradley had mono-blue.