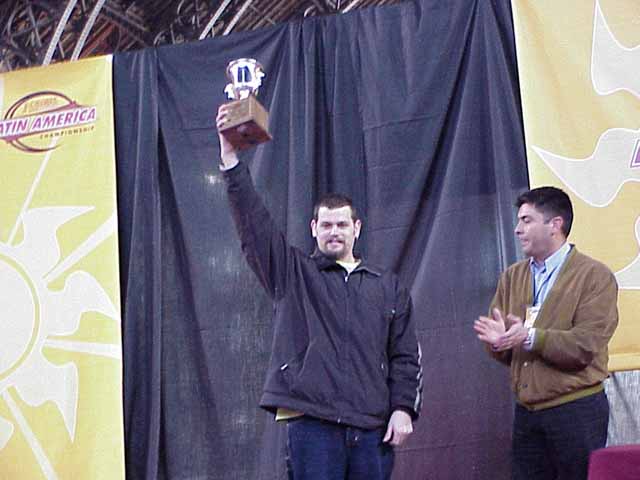 Player Gustavo Chapela is one of 3 Mexicans who made it into the Top 8 at this year's Magic: the Gathering Latin America Championship. Gustavo will be attending his fifth World Championship later this year in Brussels. After a very strong finish in the draft portion of the tournament, he only needed a 3-3 record in Standard to make it into the Top 8, so he chose to play with what has become the new deck to beat: Angry Hermit.

Originally conceived by Aaron Forsythe for his younger brother to play at Regionals in the USA, it's basically a Red/Green Land Destruction deck that uses Deranged Hermit, and most recently Skyshroud Poacher to search for them (an idea also seen in Trinity Green) and beat down the opponent. The deck features fast mana in the form of 4 Birds of Paradise and 4 Llanowar Elves, all of which are vital to cast spells like Plow Under and Deranged Hermit. He also uses Rofellos, Llanowar Emissary. Playing Rofellos is somewhat questionable, due to the amount of Control Black being played now (especially after Jon Finkel's victory at US Nationals with his incarnation of Mike Flores' "Maher-Oath"/"Hatred"/"Control Black" deck), increasing the effectiveness of playing an Engineered Plague and naming Elves. But being able to play a 3rd turn Plow Under is awesome, and is worth the risk. Chapela also uses 2 Yavimaya Elder, which gain card advantage (people call him the Green Ancestral Recall) and can even chump-block. The Elder is also extremely important in fetching the all-important Mountain to cast Avalanche Riders or Arc Lightning if you don't have a Bird or a Karplusan Forest. Being basically a land-destruction/mana-control deck, it uses Plow Under, Avalanche Riders, Fallow Earth and Tangle Wire to deny an opponent his mana, while using Arc Lightning to gain massive card advantage by killing many mana-creatures the opponent might have with a single card, and using Masticore to gain board control. To deliver the final blows to opponents are the deck's signature cards: Deranged Hermit and Skyshroud Poacher. An active Poacher used before damage resolves in combat is brutal, increasing the damage AND putting more Squirrel tokens into play. As an added bonus, Chapela plays with 2 Phyrexian Processor main deck, which is a beatstick, and if played fast is definitely a game breaker, especially against Control Black decks or decks with anti-Green tech. When asked why he played this deck, Gustavo tells us that he played it because he was expecting a lot of Replenish and no red whatsoever, either Ponza or Red Deck Wins. Gustavo's assumption was correct: there were 19 Replenish decks (only one in the Top 8) and only a few scattered Ponza decks and Wildfire (although there were 2 Wildfire decks and 1 Ponza in the Top 8!). This deck, with Tangle Wire, Avalanche Riders, Fallow Earth and Plow Under in the main deck, as well as Thran Foundry in the sideboard and Harmonic Convergence, should just crush Replenish.

Gustavo has proved time and time again that he is an excellent Magic player. Not only did he place 13th at Grand Prix Memphis, but he has already attended 4 World Championships, with this year's being the 5th! However, he didn't do too well at his Nationals in Mexico, but he had a very strong performance here, and has advanced into the Top 8 comfortably. Gustavo is an active member in the Mexican Team "Sagrev Sol".

Hi first match in the Top 8 is against another Mexican player, Francisco Garcia Barbosa, playing a Mono-Blue Draw-Go deck, without Grim Monoliths. Gustavo has a definite advantage going into this game. Tangle Wire, Plow Under, Creeping Mold, Fallow Earth and Processor are very good against Blue, and after sideboarding 2 Boils and 2 Splinter (for Masticore and Powder Keg) are added t the mix. Angry Hermit is a very solid deck, and it wouldn't be surprising to see Gustavo go all the way to the top with it.