Few people personify Magic's Old School like Shawn "Hammer" Regnier. For crying out loud, he was a professional arm-wrestler! Instead of flipping a coin, he would offer people his arm! Plus, with a name like "Hammer," he's hard to forget. No one else on the Tour has a colorful nickname.

That caricature was all I had to go on. Hammer was just a name on one of the Pro Tour 1 deck boxes. Meeting him was a bit of a shock: He wasn't enormous. I had expected fists that could encircle my head. Some of his traits fit. Broad shoulders and a laid-back attitude. A grizzled face and a gruff voice. These are the things I would expect from someone who can slam my hand to the table so hard my knuckles break. 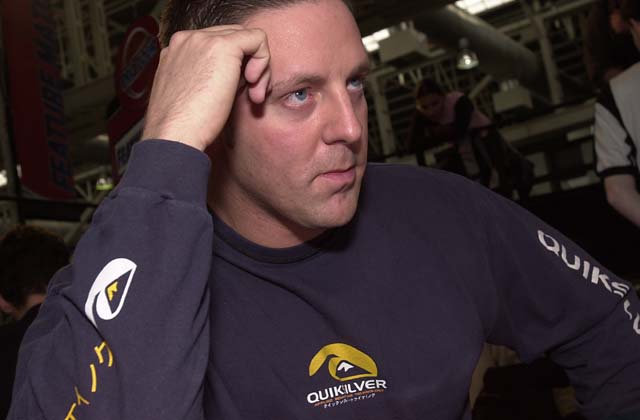 Shawn "Hammer" Regnier I watched his Round 3 Feature Match against Dan OMS, and he still worked like a Pro. His last Tour was L.A. of last year, but he didn't seem to show any ring rust. He even kept a smile on as OMS drew Dromar, the Banisher in back to back games. Lucky for Hammer that he edged out one of them, then dropped turn-five Tsabo in the deciding bout. And all the while keeping up a bitter, sarcastic banter. Think Jack Palance, only not so old that he couldn't beat you up three times before dinner.

So how is it that this bit of living Magic History can work so well in the New School? Why did he come back?

The road back to the Tour began when Hammer assumed it would not. He entered a Sealed Deck Qualifier in late January looking to win some packs. However, he fully expected to go home early, having played the format a grand total of twice before.

He changed his tune when he cracked his deck and saw Crypt Angel and Crosis, the Purger staring back at him. They were so happy to see him that they continued to show their heads throughout the Swiss, punishing players unlucky enough to draw Hammer's number. Soon he had himself a shiny Top 8 berth.

Hammer's whole strategy for the Top 8 came from a friend: Draft Black-Blue. These three words also constituted his preparation. Lacking a better plan, he stuck to what he'd been given, and ended up with a deck he found satisfactory.

Two very close (Hammer called them "gut-wrenching") matches later he found himself at the final table. His plan had come to fruition, and he was going to walk out of the tournament site with some boxes. Unfortunately for him, his opponent didn't find the split equitable, and Hammer was forced to play it out.

Somehow, he won. But there was no way he was going to pay for a trip to Spain. Not only does he hate to travel, but he couldn't afford the time away from his store, so he never gave the matter a second thought. He wasn't going to go. Months went by without so much as a game of Magic.

It was his uncle who made sure he'd make the trip. The most convincing part of his argument was that he'd take over Hammer's store while he was away. So Hammer got into a grueling regimen that saw him draft a whopping four times before boarding his plane for the Tour.

When I asked Hammer about his lack of preparation, he attributed it to a lack of local enthusiasm. He could get drafts together once a week, but not more often. And even then, the competition wasn't fierce. "It'd be just a bunch of guys from way back who'd want to do a draft." No one else had the incentive that he had.

So he used these drafts to get a feel for the way the cards worked together in the new sets. He didn't need to worry about his overall play skills. They'd been honed from his stint on the Gravy Train. "The only thing I have to avoid is getting angry. When I get angry, I start making mistakes."

Expecting a 2-2 finish in the first draft, he said he felt giddy after going 3-0. He tries not to get overexcited, though. He prefers to keep his outlook realistic and his play careful. However, he did admit that it felt great to be playing. He said that if he qualifies again, he'll definitely compete. He just might earn that spot tomorrow.

Lucky for Hammer that the interview was cut short so he could have a bite to eat: We didn't get to arm-wrestle.