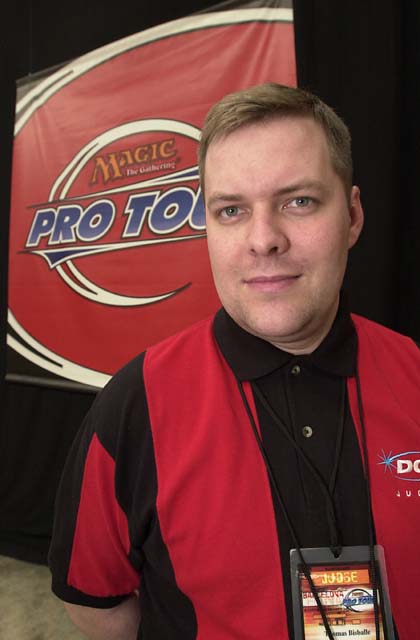 With the tenth round well underway, we managed to drag Thomas Bisballe away from the trenches for a few moments to ask him some questions about his first Pro Tour head judging experience. The Danish Level 4 judge found out eight months ago that he would be Barcelona's head judge and has since then been preparing himself for the three day extravaganza.

He decided to stick to his usual preparation plan, rereading all the latest rulings, penalty guidelines and judging material. The only real difference came when planning how to react, and act, in any known situation. A Head Judge has to be ready to rapidly, and efficiently, solve a lot of problems that would turn most Magic players' heads into jelly. He also tried to take the time to listen to more experienced judges and staff members that shared past experiences with him.

Bisballe thinks this Pro Tour is more serious than any other event he has ever attended. Being in the head judging spot at the Pro Tour makes him feeled a part of something bigger, a greater show. He started playing Magic just before Fourth Edition came out and, from the start, realized the urgent need for organization and consistency in tournaments.

That realization led him to take charge of his local gaming club and from there his judging career just kept on climbing. He helped organize and run the qualifiers for Danish Nationals on that year. As time went by, Thomas found himself playing less and judging more. Even before the DCI judging system was implemented, Thomas was hired by the local distributor to help sort out and prevent any problems at the tournaments.

Right now, anyone who wants to become a judge has a much easier journey. To become a judge, someone needs to be familiar with the rules. Then he or she needs to contact a local judge who knows the nearest Level 3, or higher, judge. This judge will then give you a couple of opportunities to gain some judging experience at local tournaments so you can get a feel for the job.

Thomas is head judging today and head judging is a very different job from being a floor judge. A head judge is above all a troubleshooter and even a manager. His or her job is to oversee things and to organize judging teams. Since the system itself advocates educating judges by experience, an effective judge must have the confidence to give the final word if a particularly difficult situation shows up. Having a head judge means any player who wants to get a second opinion on a ruling can rest assure that he will have someone very experienced to provide the best possible answer. For this tournament, the system set up five specialized teams to which Bisballe delegated very detailed functions to make sure nothing could go wrong.

Despite all this hard work and stress, Thomas Bisballe still enjoys the game a lot and is an avid player. Since the start of the year, he has played in something like sixteen to twenty non-sanctioned Limited events and over two hundred Constructed matches. In fact, he likes Constructed a lot and loves to build decks. Being a top-level judge allows him to see the decks in action in the hands of some of the best players in the world. Watching the, often small, differences between his decks and some of the best around the world is just another one of the small wonders of this game.