History of The 2004 North American Challenge 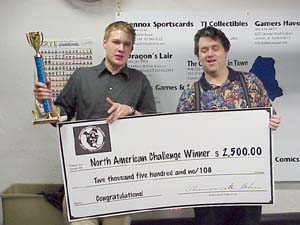 Tom Shea presents the trophy to the 2004 North American Challenge winner, Paul Rietzl years ago while visiting a local distributor I, Tom Shea, met with area store owners: Michelle Cove/Andrew Stokinger (Academy Games). The three of us were brainstorming about running a big money tournament that summer. I went back to my store, brainstormed for a week and came up with the New England Challenge.

The second NEC had 10 stores from 5 different states. The second NEC also gave away just over $2750.00 in checks and draft sets to the rest of the competitors. The Second New England Challenge was covered by Alex Shvartsman of the Sideboard. This was also a special year for us as well. Andrew Ranks did very poorly in the finals of the New England Challenge. At US Nationals Andrew finished 3rd and made the US National Team for worlds. The winner that year was Kush Patel. Kush went on to finish 3rd at the Junior Super Series finals. Alex did a fantastic job covering the event for the sideboard. We were now known outside of New England. 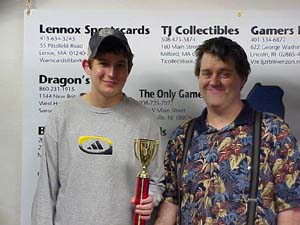 Tom Shea presents the trophy to the 2004 North American Challenge finalist, Domenic MinicucciLast year the NEC grew into the North East Challenge. The NEC had 17 stores in 8 States. The event also gave away $1700.00 to the first place competitor with a total of $5250.00 in checks and everybody else received draft sets. Alex Shvartsman was on hand again to provide coverage for the Sideboard. Each year the NEC finals have been run at 32K sanctioning level. This was the year of JD'Z Games! JD'Z is a gaming store located in Schenectady, NY. Adam Chambers (who qualified at Lennox Sports Cards) regularly played at JD'Z as did Mr. Snyder and Tony Ramasami. It was total domination by this store. This also was the year that we added many well known stores. Kings Games, The Only Game In Town, Grand Master and Your Move Games all took up the challenge. Who knew it would be the true underdogs whipping all of us!

On June 5, we assembled for the fourth installment of this tournament. We added more stores, more prizes and more excitement! Pastimes(from Chicago), Neutral Ground(NYC), Silver Dragon(NH), Disposable Heroes(RI), Larry's Comics(MA), Altered States(NY) and Star City(VA) all joined the challenge. Over $7,000.00 in prize money went to the top 24 PLUS over 40 boxes of cards to the rest of the finalists, providing a suitable reward for those who not only took up but mastered the challenge of conquering Type 2 during this key time of year. This tournament has already helped many past tournament participants prepare for both US Nationals and the JSS finals. The North American Challenges were run from April 1st through May 31st at stores, conventions and large tournaments. The finals were held on June 5th, 2004 at TJ Collectibles located in Milford, MA.