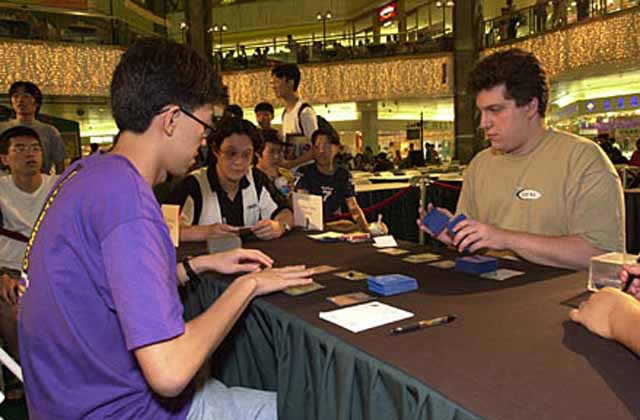 The finals of the Hong Kong Open saw the competition between the decks that have defined Standard format, Trinity Green and Angry Hermit. Tobey Tamber, an American working in Taiwan as a teacher, decided on the European designed Trinity Green deck, whilst Soon Lye Ng of Singapore chose a version of Angry Hermit, the deck that brought two top eight finalists at the recent US Nationals. The decks are very similar in style, utilizing mana control in the form of Plow Under as well as the explosive Skyshroud Poacher/Deranged Hermit engine. Angry Hermit splashes red for Avalanche Riders and Arc Lightnings, whilst the Trinity deck takes advantage of the one sided nature of Nemesis artifact Tangle Wire.

The first game showed the enormous advantage that playing first has in this matchup. Ng won the die roll and chose to play. Soon Lye lead with a Karplusan Forest and a Bird of Paradise, whilst Tobey answered with a Gaea's Cradle, usually a peculiar play considering it could not produce mana the first turn - but he wanted to ensure that Ng did not drop a Cradle of his own. Ng did not need the Cradle though, continuing to play a Vine Trellis and a Rishadan Port. On Tamber's second turn he started casting spells, summoning a Llanowar Elf and a Bird Of Paradise. But Ng's third turn play sealed the game, casting Arc Lightning targeting both of Tamber's mana creatures. With only two mana producing lands and an opponent's Rishadan Port locking down one of them, it became a formality once Ng dropped his Poacher and began bringing squirrels to Hong Kong.

At this point both players began sideboarding, with Ng bringing in two Ancient Hydras and two Splinters (to combat Masticore) siding out two Blastoderms and a Vine Trellis and a Plow Under. Interesting to note that Soon Lye didn't sideboard in a Masticore - a choice that would seem strange considering the amount of low power creatures that Trinity Green possesses. Tamber brought in two Defense of the Heart as well as three Splinters, taking out two Fallow Earths, two Blastoderms and a Deranged Hermit. Defense of the Heart is an impressive card in this matchup, with both decks creating a large amount of creatures early in the game. 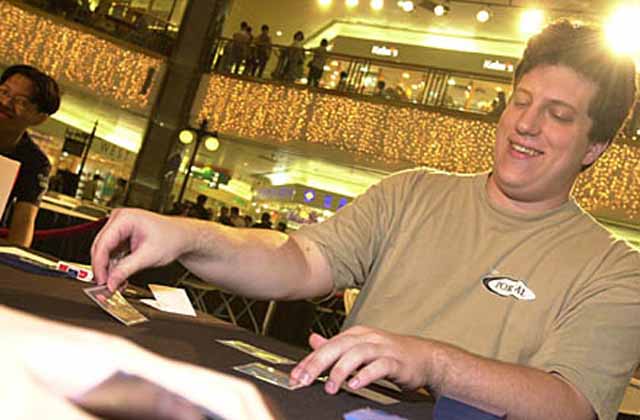 Tamber took the opportunity to go first by playing a first turn Llanowar Elf, and Ng followed suit with a Bird of Paradise. But that was the last time this game looked equal, with Tamber dropping Tangle Wire to tie up Soon Lye's mana. Whilst his opponent was all tangled up, Tamber dropped a Skyshroud Poacher and brought Hermit after Hermit into play. After Tamber cast his second Tangle Wire the game looked all but over, with Ng putting up a bit of a fight with his own Deranged Hermits. But the final nail in the coffin was Masticore which prevented any of Ng's creatures to remain on the table. After the 3rd Hermit Soon Lye conceded the game. These games were played in a fairly light hearted fashion, and there were many smiles as Tamber used Aces from his poker deck to beat up the defenseless Singaporean. 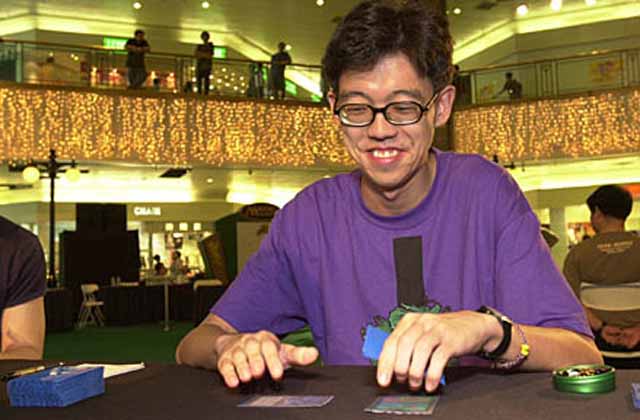 After putting in two Uktabi Orangutans to help combat Masticore, Ng probably thought he had a good chance due to playing first this game. But his hopes faded when he was forced to mulligan his opening hand due to having no colored mana sources in his opening hand. He mulliganed into a somewhat better hand that had no mana acceleration but did have two Forests and a Rishadan Port. Tamber also had to mulligan, joking to Ng that he was doing so to even up the game. His opening hand did have three land, but no acceleration, so he took advantage of his opponents mulligan to do so. His second hand was marginally better, with three land (including a Port) as well as multiple Tangle Wires. With both players just dropping lands for the first three turns of the game it looked like the first player to drop a mana creature would probably win the game. Tamber drew into an Elf and a Bird and combined with both Tangle Wires in his opening hand made short work of Ng. A Skyshroud Poacher and two Deranged Hermits later Tobey Tamber became the 2000 Hong Kong Open Champion, after attacking with four Queens and four Jacks.