How did the Magic Colony do? 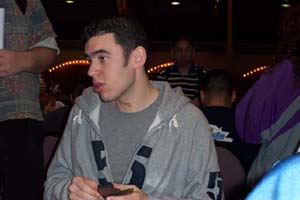 Chris Benafel All 8 members of the Magic Colony were let out of the madhouse to play today at GP Tampa. I got to sit down and ask a few questions to each of them throughout the course of the day, to find out how well they were doing today, and how their playtesting was going for PT Osaka next month. Here's what they had to say after round 6.

Q: How many viable decks do you feel you guys have for PT Osaka?
A: Ten.

Q: How many viable decks do you feel you guys have for PT Osaka?
A: We have three really strong decks, but I don't have a favorite yet.

Q: How many people do you think the Colony will put in the top 8 at Osaka?
A: I think most of us will make day 2, and I'm pretty sure we'll have 4 people in the top 16. I hope one of them is me.

Q: How many viable decks has the Magic Colony built for PT Osaka?
A: We have some ok decks, but I think we have 2 tier one decks. I'm pretty much settled on one of them.

Q: How many Magic Colony people will place in the Top 8 at Osaka?
A: One, maybe two if we're lucky. It's not going to be me though. I'm going to win PT Nice.

Q: How is the playtesting going for PT Osaka?
A: Well, I'd say we have 4-5 viable decks right now, we're always tuning them.

Q: How many Colony members will make the Top 8 in Japan next month?
A: I'd guess one, maybe two. I hope we all make day two at least, but it's rare for an entire team to advance.

Q: How is the playtesting going in the Magic Colony so far?
A: It's going pretty good. We have two really good decks, I feel confident in them.

Q: So how would you describe the Magic Colony?
A: It's definitely not like a TV show!

PTR (135th Place, 4-2)
Q: Mind if I ask you a few questions?
A: Whoa, who are you? (I tell him I'm from the Sideboard doing an article about the Magic Colony). Oh, all right. I didn't know if you were a cop here to arrest me or something. Ask away!

Q: Cool, how is your deck today?
A: It's pretty good, I've gotten my third Finkel (Shadowmage Infiltrator) in a row at a Grand Prix. He isn't as good this time because of Organ Grinder, but I won't complain.

Q: How is the experience in the Magic Colony so far?
A: It's a lot more fun than I thought it would be. I thought I'd get sick of people quickly, or they'd get sick of me, but I was wrong—we're getting along great and having a lot of good times.

Q: So the testing is going well for you?
A: Yeah, we have 2 great decks so far, and a few more decks that we're working on.

Q: How many people do you think the Magic Colony will land in the Top 8 in Osaka?
A: At most, four, but that includes outside playtesters like Brian Kibler and Ben Rubin.

Brett Shears (33rd Place, 5-1)
Q: So how was your deck today?
A: It was good, but I built it poorly. I tried to force Black/Green, but after the first game of every match I'd sideboard into Black/Red/Blue. I've only lost one game sideboarded so far today.

Q: And would you say that the playtesting is going well for the Magic Colony?
A: It's going well. We have some doubters, but the decks right now are really well tuned to beat the field. We've got 2-3 viable decks, and we are set to beat the most common metagame decks, like Blue/Green threshold.

Q: Do you think there's a chance that your testing might get too inbred, so you focus on beating your own decks too much, and miss some outside decks?
A: I don't think so, we have a really wide range of decks we test and test against. We don't want to build anything too irrational, but I'd say we don't have too much inbreeding. Every time we play the decks, we learn something new, and it helps us improve.

Q: So how many people do you think the Magic Colony will put in the Top 8 in Osaka?
A: I really couldn't say for sure, but I really want us to do well. It'd be great if we could get 10 in the top 10 like Chris said, but I'd be really happy if we put four in the top 8.

Q: Do you think you'll playtest as a group once Osaka is over?
A: We've become a really tight group of friends. A few of us, like PTR, Chris and myself travel to almost every major event. Some of the other members don't go as much to foreign events, but everyone contributes to the group as a whole.

Q: How many decks do you have built so far for Osaka?
A: I'd say we have 2 really good decks.

Q: What's the best team?
A: The Magic Colony, but in Magic Online it's the Southeast Locals. We're what, 200 points ahead of everyone else right now?