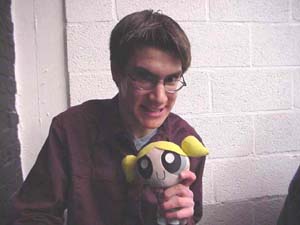 Jan DoiseThe first step in any sealed deck victory is to open a decent deck. The next step is to defeat all of your opponents 2-0 in fifteen minutes or less. This is the road that Jan Doise of Herent, Belgium has chosen today.

Jan is well-known to the community of Dutch and Belgian players that hang out on IRC. He's known as the seventeen year old kid in constant motion, taking beatings from his pals for being too hyper, too talkative, too young. Today, Jan is definitely the one handing out the beatings, and his friends are talking in awed whispers about his deck. "I wish I had his skills," lamented pal Stan van der Velden.

Of the five rares that Jan received to play today, only one -- an Extract -- remains in the sideboard. Jan's other rares: a Cabal Patriarch, a Nantuko Shade, a Laquatus's Champion, and an Iridescent Angel.

Naturally, with such an impressive array of savage creatures, Jan chose to play black/blue with a splash of white. His two white cards? His Iridescent Angel and a lone Hallowed Healer. He's taken a total of thirteen points of damage in his first six rounds of play, and he's currently 6-0. One of his opponents even managed to do eight damage to him once... over the course of two games. He hasn't lost a game yet.

"If you take out my rares, my deck is... average," says Jan, but don't listen to him. Even his commons are right on par with some of the better blue/black decks being played today. Ghastly Demise, Patriarch's Desire, Repel, Balshan Collaborator, Skywing Aven, Faceless Butcher... this deck is just good to the point of silly. Contrast Jan's deck with Stan's -- "When the total power of all of your creatures equals twenty, that's really bad," Stan said of his own deck. "I can sideboard up to twenty-three though."